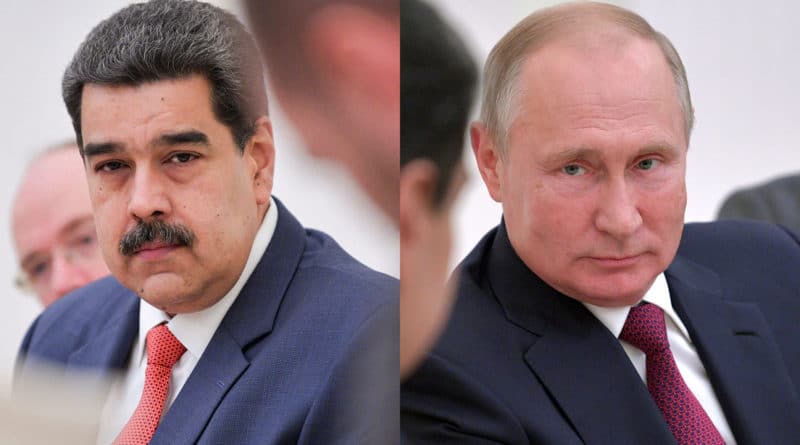 Russian President Vladimir Putin and his Venezuelan counterpart Nicolás Maduro held a telephone conversation on Monday. They discussed issues related to controlling the spread of the coronavirus pandemic. In this context, the Venezuelan leader has expressed his appreciation for the assistance provided by Moscow, which includes the provision of test systems to detect SARS-CoV-2, reports the Kremlin website.

In the framework of the call, which took place at the initiative of Caracas, the importance of the adoption by the international community of coordinated measures to combat this new global threat, including the implementation of the initiative presented by Putin to create “green corridors” during the crisis, free from trade wars and sanctions, to supply medicine, food, equipment and technology.

In addition, the leaders have exchanged opinions on the current situation in the world crude oil market, emphasizing the great importance of the agreement reached in the framework of OPEC + on an agreed reduction in oil production. Various aspects of further strengthening Russian-Venezuelan strategic collaboration have been addressed, mainly in the commercial and economic fields.

RELATED CONTENT: Will America Launch a War on Iraq?

In conclusion, Russia has reasserted its support for the efforts of the Venezuelan authorities, represented by its President Nicolás Maduro, to achieve a peaceful solution to internal political differences based on dialogue at the national level. Moscow has also emphasized that destructive external interference in Venezuelan affairs is unacceptable.

On this conversation, the Ministry of Foreign Affairs of Venezuela issued a statement, published by Foreign Minister Jorge Arreaza on his Twitter account:

The Ministry of Popular Power for Foreign Affairs reports that this morning, the President of the Bolivarian Republic of Venezuela, Nicolás Maduro Moros, had a telephone conversation with the President of the Russian Federation, Vladimir Putin, in which they discussed joint efforts to confront the Covid-19 pandemic, as well as a shared analysis of the international situation and progress in cooperation projects between the two countries.

President Maduro thanked, from the heart of the Venezuelan people, the support of Russia through the provision of thousands of diagnostic tests for the Covid-19. The Russian President guaranteed new shipments of health supplies and materials and expressed the need for greater coordination between the medical and scientific teams of both countries, through contacts and videoconferences to be held in the coming days.

The Russian leader recognized that the health strategy adopted in Venezuela by President Maduro has been adequate and consolidates the stability and peace in the country. Both leaders condemned the continued illegal and inhumane unilateral coercive measures during times so difficult for humanity.

RELATED CONTENT: Caricom Demands End of US Sanctions Against Cuba and Venezuela

In this regard, President Putin made reference to one of his suggestions before the G-20, in coordination with proposals from the G-77 + China, on Green Corridors that allow countries under sanctions and trade wars to acquire the necessary supplies to take care of their peoples during the pandemic, without restrictions, including a moratorium on the application of sanctions, so that the affected countries can have free access to their international assets and accounts to face Covid-19.

The leaders discussed the situation in the oil market and agreed to fully support the OPEC + mechanism, which will come into full effect on May 1. In this regard, President Maduro recognized the decisive role of Russia in the consensus reached among all the actors and proposed a meeting of the Monitoring Committee of the mechanism on May 10, in order to guarantee the early evaluation of the effect of the agreements in the world energy market.

The presidents agreed on the good progress of bilateral cooperation, which both leaders personally monitor and adjust. They agreed that in 2020, beyond the health situation and any global circumstance that arises, both parties must advance in the consolidation of the strategic level of the relationship in all areas of joint development work, including its new modalities.

President Nicolás Maduro thanked the firm support shown by President Putin and his government in all international forums in defense of Venezuelan sovereignty and democracy, while assuring him of working tirelessly on humanitarian political agreements with all sectors of the Venezuelan opposition, facing the challenges of the coronavirus pandemic.

Upon leaving, President Putin ratified his support for the Bolivarian government, insisted on consolidating the common front with Russia and reiterated the invitation to President Maduro to visit Moscow for the celebrations on the 75th anniversary of the victory of the Great Patriotic War, whose rescheduled dates will be announced soon.