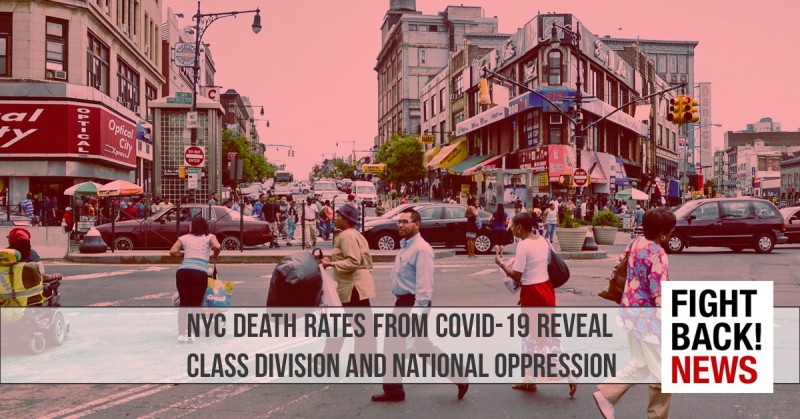 New York, NY – As of April 6, the rates of death from COVID-19 are twice as high for Latinos and Black residents of New York City as they are for white residents. According to the Bureau of Communicable Disease Surveillance System, the rate of death from COVID-19 is 22.8 people per 100,000 among the Latino community, 19.8 per 100,000 people among the Black community, and only 10.2 per 100,000 white people. These numbers are based on 63% of confirmed cases in New York City.

This stark divide in death rates is outrageous yet unsurprising. Many factors underlie these numbers, including differences in access to health care among New York’s communities, disparities in funding and resources being distributed among the five boroughs, and – perhaps most significantly – income gaps between oppressed nationality and immigrant communities on the one hand, and their white counterparts on the other.

The fact that Black and Latino people are more likely to die from COVID-19 in New York City than white people are maps onto a history of national oppression that continues today. Over-policing of Black neighborhoods has long been a method of eroding community structures and disempowering African Americans. This over-policing has led to massive rates of incarceration of Black people for low-level offenses and trumped-up charges. Now as a result of COVID-19, the New York City prisons have become a hotbed for infection and spread of the virus, and judges are forcing the prisons to release certain inmates because the health conditions inside the prisons are too poor.

We see the same dynamic occur in immigrant detention facilities: ICE is a tool of terror against immigrant communities and ICE detention facilities have been shown to have COVID-19 amongst the detainee population. On top of this, many Latino and other immigrant families are afraid to seek out proper testing and treatment for COVID-19 due to the fact that ICE has continued its raids on their community even during the quarantine and going to a hospital means risking deportation or immigrant detention.

RELATED CONTENT: Coronavirus: Capitalist Chaos, Workers Resistance and the Dictatorship of the Proletariat

The underlying systems of national oppression are interwoven with the oppression of the multinational working class under capitalism. The five ZIP codes with the highest rates of COVID-19 infection in New York City, for example, are all located in Queens – one of the most ethnically diverse places in the world, and home to some of New York City’s poorer communities. According to The Intercept, these five ZIP codes have an average income of $26,708. The five ZIP codes with the lowest rates of infection are all located in Manhattan and have an average income of $118,166. The high infection-rate ZIP codes include Jackson Heights, Corona, Cambria Heights, East Elmhurst and Queens Village. In Brooklyn, one of the neighborhoods with the highest rates of infection is Brownsville, a largely immigrant and Black neighborhood with an average per capita income of only $16,499.

The realities of daily life for workers in New York City often include long commutes, a complete dependency on public transportation and more time spent in cramped and contaminated spaces. Last month, Mayor De Blasio and Governor Cuomo asked New Yorkers to stay off of the subways, buses and trains in order to help avoid infection. This might be a realistic proposition for those wealthier New Yorkers who can afford to live near their work but is simply not plausible for the vast majority of working-class New Yorkers. When you consider that more than 600 transportation workers from the Metropolitan Transit Authority tested positive for COVID-19 as of April 2, this class-based distinction helps us understand the divergent death rates along race and class lines.

Under today’s economic system, lower average incomes in a community almost always mean less access to public health resources and healthcare, worse local hospital conditions and less freedom to stay home and follow public health recommendations. This was all true before COVID-19 began and is partly to blame for the death rates. That economic reality is compounded by a system of national oppression against African American, Latino and other oppressed nationality communities that leaves them extremely vulnerable to health crises like this one – from over-policing and over-crowding of prisons in New York City to the terrorizing of immigrant communities by ICE that keeps sick people from seeking out testing and treatment. COVID-19 has shone a harsh light on the underlying class and national oppression New York City. Fighting to change those conditions is the only genuine way to prevent these kinds of public health crises in our communities in the future.