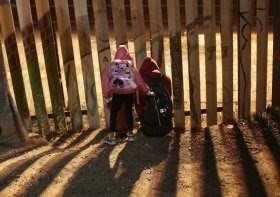 The girl, who was detained since last week for entering the United States, illegally, has died of dehydration and ‘shock’.

The US Customs and Border Protection Office announced on Thursday the death of a seven-year-old Guatemalan girl. The child died of dehydration and ‘shock’ at a Border Patrol facility, where she had been detained since last week after she crossed the US border illegally from Mexico along with her father and a group of migrants, details The Washington Post.

The girl and her father were arrested on December 6, south of the city of Lordsburg (New Mexico, USA). They were part of a group of 163 migrants who approached the agents to surrender.

More than eight hours after the arrest, around 6:25 on December 7 (local time), the girl began to have seizures. The emergency teams arrived early and discovered that the child had a fever of 40 degrees and, according to reports, had not eaten or drunk for several days.

She was taken by helicopter to a hospital in El Paso, where she suffered a cardiac arrest, from which she could be resuscitated by the doctors. However, she never recovered and died less than 24 hours after her admission. The Bureau of Customs and Border Protection investigates the case to ensure that the agents complied with all necessary procedures, while the child’s father remains in El Paso. waiting for a meeting with the representatives of the Consulate of Guatemala.

At the moment it is not clear if the Border Patrol agents gave the girl food and water and secured a medical check-up – typical assistance that the officers have to provide to migrants – that night, before she started feeling sick.

The spokesman of the Customs and Border Protection Office Andrew Meehan expressed the condolences of the agency before the family of the deceased and assured that the agents “took all the possible measures to save the life of the girl in the hardest circumstances”.

Congressman Joaquin Castro, D-Texas, said late Thursday in a statement he was “devastated by reports that a seven-year-old girl who was taken into Customs and Border Patrol custody died of dehydration and exhaustion. I’ll be asking for a full investigation by the Inspector General and Congress into the conditions and circumstances that led to her death.” “We can do better as a nation,” said Castro, a member of the House Foreign Affairs and House Intelligence Committees. “This is a humanitarian crisis and we have a moral obligation to ensure these vulnerable families can safely seek asylum, which is legal under immigration and international law at our borders,” Castro’s statement said.

Cynthia Pompa, advocacy manager for the ACLU Border Rights Center, in a statement called for “a rigorous investigation into how this tragedy happened and serious reforms to prevent future deaths.” “This tragedy represents the worst possible outcome when people, including children, are held in inhumane conditions,” the statement said. “Lack of accountability, and a culture of cruelty within CBP have exacerbated policies that lead to migrant deaths. In 2017, migrant deaths increased even as the number of border crossings dramatically decreased.”