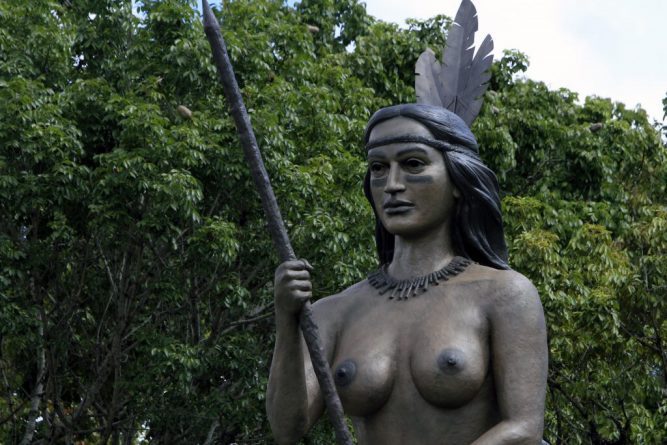 Beneath a shining sun and with a Wayuu dance called La Yonna, began the inauguration of the impressive work of art that took the place that, for years, was occupied by the statue of a Lion, which referred to the name by which the capital [Caracas] was founded by a character who executed a cruel massacre in these lands, Diego de Losada.

Thanks to a process of decolonization, promoted by the Mayor of Libertador Municipality with the arrival of Érika Farías, upon arriving in Caracas, on the highway Valle-Coche, a masterful figure of the warrior of Cúa, with long hair, thick lips, deep and slanted eyes, and great body firmness, welcomes visitors and local people, she is Apacuana.

The mayor announced the change through her twitter account @ErikaPSUV where she posted: #Apacuana protects the entrance to our #Caracas Insurgente. We claim the work of a great warrior who in the sixteenth century resisted the colonization of these lands. With the strength of our history we will continue to resist the colonial culture that refuses to die.

Ritual of the Sacred Word

At the inauguration of this work by the young Merida sculptor, Giovanny Gardelliano, representations of indigenous peoples such as Kariña, Pemón, Jivi, Wayúu, among others, took place. In addition, there were personalities such as the anthropologist and researcher, Iraida Vargas; the deputy minister of indigenous peoples, Omaira Rodríguez; and the poet of the Kariña tribe, Morela Maneiro, who performed the Ritual of the Sacred Word, where, through singing in native languages, she invoked the spirit of the warrior. “Two years ago we went to the Piedra del Indio petroglyphs in Miranda state, and we wanted to collect the steps of her to call her today at this ceremony. I felt chills, she is present,” said Maneiro.

Vargas calls her La Cacica de la Dignidad because “she was the one who convinced her people not to continue being afraid, that it was preferable to die than to live in the indignity of domination.” She also stressed that Apacuana is the victim of a sold historiography that hid the role of women in the fight against the invaders.

She also referred to the fact that the Apacuana struggle was not only driven by the resistance against the colonization of the peoples but also was inclined to the recognition for the feminine dignity because the QuiriQuiri people “respected their women”.

The Vice President of Indigenous Peoples, Omaira Rodríguez, highlighted the visibility that has been given to indigenous peoples with the arrival of the Bolivarian Government, creating institutions and laws that protect the culture of those who continue to resist the attack of a modernity that drags its customs and territories.

At the foot of the large sculpture is a plaque that says: Woman, indigenous, mother, healer, cacica of the QuiriQuire ethnic group, promoter of the resistance against the Spanish colonization of the sixteenth century. Her legacy shakes the patriarchal history of the West, stoking the spirit of rebellion of all our generations.

Juan Ramírez, representative of the Wayuu people, explained that the dance of La Yonna takes place in front of a monument, place or patrimonial and sacred symbol. It is basically the search for social equilibrium, collective solidarity and the relationship between nature and man. “It’s a dance where the woman is the one who plays the leading role and knocks down the man who is dancing with her,” Ramírez said.

The woman resembles movements of nature and animals to the rhythm of kasha, the only instrument used in this manifestation that imitates the different sounds of the Wayuu territory.