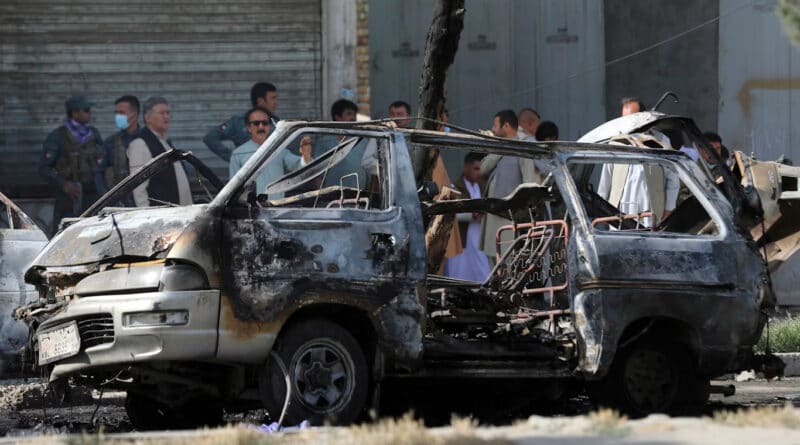 At least 40 civilians have been killed in Afghanistan in recent days as the US launched renewed overnight airstrikes to combat the Taliban.

KABUL, AFGHANISTAN — At least 40 Afghan civilians have been killed, according to the United Nations, as the U.S. Air Force launched renewed overnight airstrikes to combat a Taliban offensive aimed at capturing the southern provincial capital from Afghanistan’s government forces.

The U.S., which is slated for full withdrawal from Afghanistan by September 11, used B-52 bombers to target Taliban positions in Lashkar Gah, in a bid to help Afghan government forces fend off a takeover of the city.

At least 10 districts of Afghanistan’s Helmand Capital have been seized by the Taliban, with the AP quoting besieged citizens of Lashkar Gah as saying that all but one district around them had fallen to the militant group. A local citizen quoted by AFP elaborated on the situation, stating: “There is fighting, power cuts, sick people in hospital, the telecommunication networks are down. There are no medicines and pharmacies are closed.”

According to the United Nations Assistance Mission in Afghanistan (UNAMA), it is not only the Taliban’s ground offensive, but pro-government airstrikes that are greatly affecting civilians, of which at least 40 reportedly have been killed and 118 wounded.

In the three days prior to the strikes, the U.N. had reported 10 civilian casualties and 85 injured. The U.N. has also tracked an additional 47% increase in civilian deaths in the first half of 2021, which makes this year the highest on record for civilian casualties since 2009.

Stay or go? Pressure on U.S. from both sides
The U.S. airstrikes, which have been ongoing in a bid to aid Afghan government forces, are also drawing heat from critics of the U.S. government’s longest war. CNN reported last month that President Joe Biden’s National Security Council is still weighing whether to continue its forces’ abilities to launch commando raids and predator drone strikes in the country after the completion of the Afghanistan withdrawal. The U.S. drone war escalated under former President Donald Trump, killing 700 civilians in 2019 alone. Biden has yet to officially comment on whether these lethal drone strikes will continue in Afghanistan following September 11.

The troublesome prospect of continuing U.S. airstrikes in the country has led to heavy pressure on the Biden administration, especially after U.S. Air Force intelligence analyst Daniel Hale was sentenced to 45 months imprisonment for exposing the overwhelming toll the U.S. drone program has taken on civilians. Hale, a whistleblower sentenced under the Espionage Act, condemned the drone program’s “undeniable cruelties,” which anti-war critics of U.S. policy are seeking to abolish.

Afghanistan’s President Ashraf Ghani has also applied his own pressure on the U.S. government by blaming the recent outbreak of violence, initiated by the Taliban, on the U.S.’ sudden withdrawal strategy. If the Taliban are able to seize Lashkar Gah, this will likely place a considerable amount of additional pressure on the United States to continue its CIA-coordinated activities inside of the country in order to combat the Taliban and other radical fundamentalist groups.

According to data cited by the U.N. Office for the Coordination of Human Affairs, 40% of all civilian casualties in Afghanistan between 2016 and 2020 have been caused by airstrikes, amounting to a total of 3,977 casualties, 1,598 of whom were children.

The United States government spent over $2.4 trillion on its 20-year-long war in Afghanistan and has been long questioned on what that spending has achieved. Nonetheless, with the continued engagement in the ongoing conflict unfolding inside Afghanistan, it remains unclear whether the U.S. government will continue to spend on this war effort, post-official withdrawal.

Robert Inlakesh is a political analyst, journalist and documentary filmmaker currently based in London, UK. He has reported from and lived in the occupied Palestinian territories and hosts Press TV’s show ‘Palestine Files’. Director of ‘Steal of the Century: Trump’s Palestine-Israel Catastrophe’. Follow him on Twitter @falasteen47