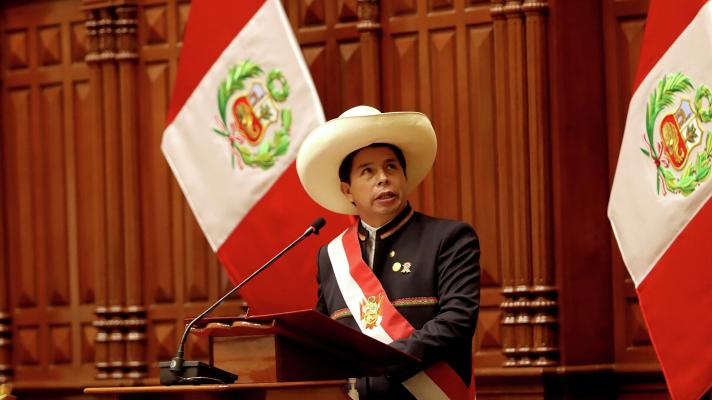 A few days after the inauguration of Pedro Castillo, the Peruvian government has changed the official position that its predecessors maintained regarding the internal affairs of Venezuela. Yesterday Perú’s newly appointed Minister of Foreign Affairs Héctor Béjar pointed out that the policy of the new government will be opposition to blockades and “sanctions.”

Commenting on the future of the Lima Group directed by the US and formed under Peruvian President Pedro Pablo Kuczynski (2016-18), who is currently under house arrest, Béjar noted that there are already several countries of the interventionist group that changed their position on Venezuela. The Lima Group represented an attempt to bring together countries that did not recognize Venezuela’s President Nicolás Maduro as the rightful head of state of the Bolivarian Republic.

Notable statements by Béjar
• “The Lima Group must be the most disastrous thing we have done in international politics in the history of Perú.”
• “Venezuela is a country that is blockaded. We will contribute, with the countries of Europe that are already working on this, and with a group of Latin American countries, to reaching an understanding with the various political tendencies that exist in Venezuela, without intervening in its internal politics.”
• “We will favor a democratic renewal in Venezuela that respects the social rights of Venezuelans.”
• “Our concern is that the rights of marginalized people are respected, not only in Venezuela, but in Perú and many other countries, and that the level of social welfare improves.”
• “Our policy is to defend human rights. We are against repression in Perú and in all countries. Our policy has to be democratic—that there be dialogue and not confrontation. We aspire to a dialogue with the people… and not to establish conflicting policies.”

Reorienting international politics
The new Peruvian foreign minister pointed out that “in the bicentennial year we will be consistent with the historical tradition of Peruvian diplomacy and we will withdraw from Congress the request for Perú to denounce the treaty that  instituted UNASUR.”

“On the contrary,” he added, “we will promote its reconstitution and modernization, as the cooperative and consultative organization that asserts South America in world politics.”

When Béjar was asked whether he plans to meet with Carlos Scull, designated as Venezuela’s “ambassador” in Perú by former deputy Juan Guaidó, Béjar responded dismissively, and said that he did not know Scull.

Media and some analysts confirm that the change of position on Venezuela will bring Perú closer to the International Contact Group, which is seeking dialogue as a resolution to the so-called Venezuelan crisis. However, other policy experts view the Contact Group as the “good cop” in a US strategy to overthrow Maduro’s government.

Regarding the recent protests in Cuba, Béjar commented that “in all countries there are people on the street,” and recalled the demonstrations against Castillo’s government called for by right-wing elements on Sunday in Lima. “The conditions are different, but every country has its internal problems,” said Béjar. “We don’t have to meddle in internal affairs.”

These statements followed President Pedro Castillo receiving congratulations on July 28 from the US Secretary of State, Antony Blinken, who asked the new Peruvian president to preserve Perú’s “constructive role” in relation to countries such as Venezuela and Cuba.

Why it is important
The rearrangement of international relations and regional integration in Latin America and the Caribbean requires the recovery of respect for the sovereignty of its countries. The signals given by the newly inaugurated government are in alignment with these principles. However, it remains to be seen whether external and internal pressures from the regional right against Castillo will give him room to maneuver.

The challenges of his government are comparable to any of those in the region, as evidenced by the fact that neither the press nor his political adversaries even waited for Castillo to assume power before they sought to destabilize Perú’s institutions, already weakened by entrenched neoliberal corruption, in a country where the rights of the poor majority have been trampled on for decades.