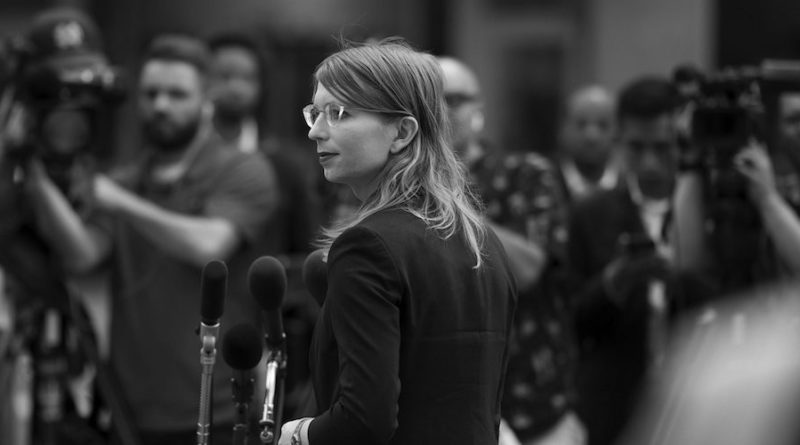 Editorial note: On Sunday March 15, Chelsea Manning announced on her twitter account that the amount to pay for the illegal fees was reached.

“No one should get tortured and fined hundreds of thousands of dollars, without even getting charged with a crime, for standing up for their rights.”

Thousands of people have contributed to a GoFundMe campaign launched by a friend of U.S. Army whistleblower Chelsea Manning, who was released from jail Thursday and faces over a quarter million dollars in legal fines for her refusal to testify to a grand jury about WikiLeaks founder Julian Assange.

Federal Judge Anthony Trenga ordered Manning’s immediate release less than 24 hours after she was hospitalized for attempting suicide. While welcoming that decision, some of Manning’s supporters pointed out that Trenga also ordered Manning to pay the $256,000 in fines she has accrued.

Manning’s friend Kelly Wright, who was the communications director for the whistleblower’s 2018 U.S. Senate bid, set up the fundraiser with the aim of fully covering the court-imposed fines. As of press time, more than 2,300 donors had collectively given over $93,400 to the effort.

And just like that we are 20% of the way toward our goal of WIPING OUT the fines accrued by Chelsea Manning during her year incarcerated for grand jury resistance. Thank you all so much for donating and sharing! Onward and upward: https://t.co/lnTJEdIvD7 pic.twitter.com/lZrACn2fMu

Supporters of Manning raised awareness about the fundraiser on Twitter, decrying both the fines and Manning’s yearlong detention, which United Nations Special Rapporteur on Torture Nils Melzer denounced last year as “an open-ended, progressively severe coercive measure amounting to torture.”

This is the official crowd funding link for Chelsea Manning's $256,000 fines. Please donate! No one should get tortured and fined hundreds of thousands of dollars, without even getting charged with a crime, for standing up for their rights https://t.co/CrrWgiamo4

Chelsea Manning has been released, but she was fined $1,000 for each day she refused to testify.

Those fines now total approximately $256,000, and she's been ordered to pay them.

IMPORTANT: Chelsea Manning (@xychelsea) is being released from jail, but she has to pay more than a quarter million dollars in fines.

THIS IS THE ONLY OFFICIAL FUNDRAISER TO HELP HER PAY THOSE FINES:

the state really shouldn’t be charging chelsea a quarter-million (they shouldn’t charge her anything and in fact owe her immensely) https://t.co/ku7q0x5ifV

The fundraiser has grown in popularity since Thursday as critics continued to sound off about the U.S. government’s treatment of Manning, who was jailed at the William G. Truesdale Adult Detention Center in Alexandria, Virginia for most of the past year for not testifying against Assange, who is imprisoned in London while he fights the U.S. government’s attempt to extradite him.

Manning’s detention in Virginia since March 2019 came after she was released from prison in May 2017 because outgoing President Barack Obama had commuted all but four months of the 35-year sentence she was serving for leaking classified materials and government records to WikiLeaks.

The government cast Manning into a dungeon for resisting a scheme to make publishers of news subject to the Espionage Act. They offered to let her out in exchange for collaboration, but she chose her principles instead.

Chelsea Manning has done more for the world in her 32 years than can be expected of any person in a lifetime, & has sacrificed so much & paid such a huge price for her public service. She was released from prison yesterday but faces huge fines & challenges to live. Please donate: https://t.co/BNu13OsFlk

Along with the GoFundMe campaign launched by Wright, there is an ongoing fundraiser on the Action Network to cover Manning’s “legal fees, and legal costs such as court transcripts and travel, and commissary.”

Let's be perfectly clear about this. There are only TWO legit fundraisers for @xychelsea going on right now:

Featured image: Whistleblower Chelsea Manning was released from jail Thursday after attempting to take her own life Wednesday. (Photo: xychelsea/Twitter)