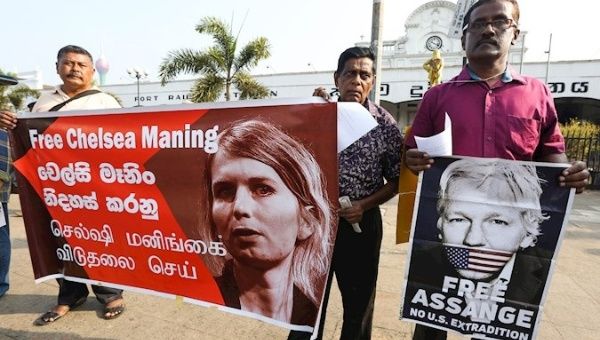 Former U.S. Army Intelligence analyst Chelsea Manning attempted suicide on Wednesday at a detention center in Virginia, where she has been incarcerated since March 2019 for her refusal to give testimony before a grand jury convened to investigate and prosecute journalists whose work threatens to expose government misdeeds.

The anti-war activist, who is currently recovering her health at the hospital, was scheduled to appear before a judge regarding a motion seeking to end the civil contempt sanctions she faces.

“Ms. Manning is still scheduled to appear on Friday for a previously-calendared hearing, at which Judge Anthony Trenga will rule on a motion to terminate the civil contempt sanctions stemming from her May 2019 refusal to give testimony before a grand jury investigating the publication of her 2010 disclosures,” Manning’s lawyers said.

RELATED CONTENT: Outrage Over Judge’s Refusal to Allow Assange to Sit With his Lawyers During Extradition Hearings

U.S. prosecutors have kept Manning in jail under “coercive confinement”, which means that she will be held in jail until she agrees to cooperate and testify about her association with WikiLeaks founder Julian Assange.​​​​​​​

“Coercive confinement is considered a violation of international law, but the U.S. authorizes its use to enforce cooperation with grand jury subpoenas… Since Chelsea will never betray her principles, her confinement is not coercive, but punitive, and must not continue,” organizations supporting the anti-war activist said.

Before being at the Alexandria Detention Center, Manning served seven years in a military prison on the same charges that are currently being brought against her.

Assange, Manning, Snowden, the true Heroes of our days! https://t.co/iHUQwAF2xB

Her lawyers have also assured that “she will not betray her principles, even at the risk of serious damage herself.”

In 2019, in a letter to Judge Anthony Trenga, Manning said that the judicial process against her only seeks to intimidate journalists and editors who dare to fulfill what society demands of them, namely, to report the truth.​​​​​

While a military intelligence analyst in 2010, Manning leaked more than 700,000 classified documents on the U.S. military and political actions in Iraq and Afghanistan. This information exposed the true reasons that motivated Washington to militarily attack these countries.

In August 2013, a military court sentenced the former US soldier to 35 years in prison. Later, however, the then-President Barack Obama commuted his sentence.​​​​​​​