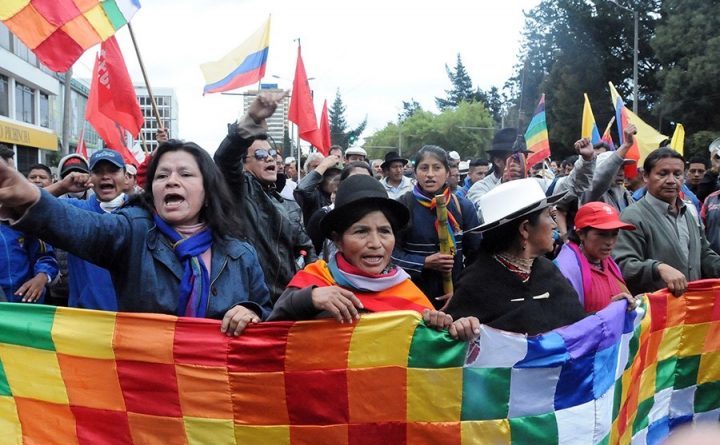 The IMF is backing a tax reform bill in Ecuador that will enable capital flight and further austerity.

Over the past year, a rebranded IMF returned to Latin America with promises of loan agreements that would be different than the dreaded “structural adjustment programs” of the past. Behind statements about inclusive growth and protecting the most vulnerable, are policies similar to the structural adjustments of the Washington consensus era. While the Argentina programme has already imploded, leaving behind soaring poverty and a collapsed economy, the IMF seems determined to push forward its agreement with Ecuador.

Things have not been smooth for the IMF in Ecuador. Massive protests erupted after an attempt to impose fuel price hikes as part of the IMF agreement – forcing the Ecuadorian government to withdraw the measures and temporarily put its agreement with the IMF on hold. The IMF recently announced it plans to resume its program in Ecuador after the country’s National Assembly passed a tax reform bill.

However, the IMF’s press release fails to mention that the bill contains several provisions that aim to weaken and essentially render Ecuador’s capital controls ineffective. Ecuador introduced a series of measures to discourage capital flight and prevent speculative flows of capital back in 2007 by taxing outflows that did not meet the criteria of productive foreign direct investment (FDI). The measures have been successful in strengthening macroeconomic stability and raising revenues for the government.

It is important to note that under the original bill, inflows financing productive activities and staying in the country for at least one year were already exempt from this tax. It also specified that outflows to a list of tax havens cannot be exempt from paying the tax.

The new bill passed by the Ecuadorian assembly removes the provision on tax havens, shortens the wait period for some investments to be exempt from the tax, and withdraws it altogether for equity and security markets as well as financial investments.

The changes to the law effectively open the door to financial speculation. Furthermore, by removing the tax haven provision, the new law allows both domestic and foreign investors to reroute their money as “phantom FDI” – avoiding both income and capital outflow taxes.

The measures included in this bill are in direct contradiction with the Fund’s supposedly evolving position on capital controls. A recent article in the Financial Times praised the IMF’s warming towards capital controls, going over a series of statements made by high ranking IMF officials on what they refer to as “capital flow management”. These statements are in line with the IMF’s institutional view on capital flow management released in 2012. That position recognized that capital account liberalization might not be the appropriate measure under all circumstances, moving away from the neoliberal dogma of open capital accounts.

RELATED CONTENT: 2019 Latin America in Review: Year of the Revolt of the Dispossessed

It is also stated in the IMF’s Articles of Agreement that Fund resources cannot be used to “meet a sustained outflow of capital”. However, this is exactly what happened in Argentina, where $36.6 billion left the country as the IMF disbursed $44.5 billion. Sustained capital flight was undeniably a main contributor to the colossal failure of the IMF’s latest Argentina program.

It seems natural to ask under these circumstances and given the context, why the IMF is pushing for measures that weaken Ecuador’s current capital controls. Since the tax on outflows already did not apply to productive, long-term investments, attracting more (real) FDI cannot justify these measures. On top of all this, the unpopular measures that the IMF demanded and that fueled massive protests earlier this fall have only been postponed.

It appears the IMF will double down on an austerity program in Ecuador, which is likely to result in a prolonged recession and growth projections that never materialize (a common feature of IMF programs). It is thus unrealistic to believe that the measures in the new tax bill will massively attract new productive investments. The most likely outcome is an increase in volatile capital flows that will further threaten the macroeconomic stability of Ecuador’s dollarized economy. Even in the program itself, the IMF acknowledges that the current environment, which has only worsened since the agreement was signed, might not be the best time to remove the tax on transfers abroad.

The IMF nevertheless states that these measures are “laying the groundwork for robust and sustainable growth, while protecting the most vulnerable”. Yet the tax bill does nothing of the sort. It enables local elites to take their money out of the country cost-free; it makes tax avoidance and speculation easier; and it introduces regressive taxation measures, placing the burden of adjustment on Ecuador’s most vulnerable. Unfortunately, rather than learning from its mistakes in Argentina, the IMF appears to be repeating them.