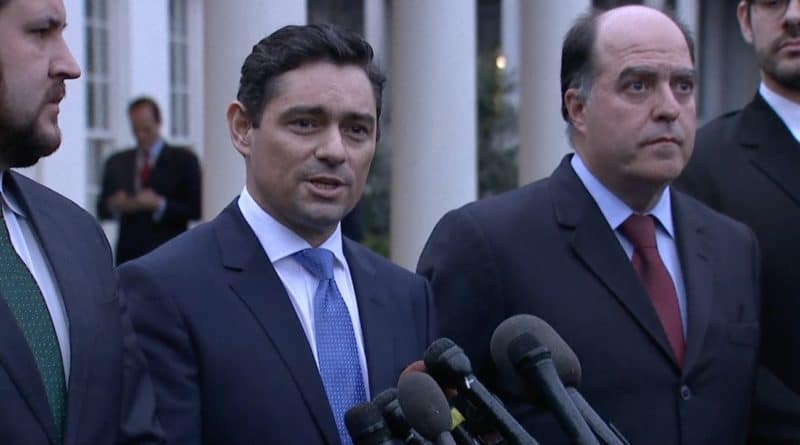 The State Department hosted four of Venezuela’s largest opposition parties, starting with one-on-one sessions that began earlier this week before all the parties gathered together on Wednesday.

One source said the administration plans to “pour more coal into the fire” with stronger, more complex sanctions that will further isolate Maduro from an axis of nations supporting him.

“The steps that will be taken by the United States during the next year were discussed,” said a high ranking member of Guaidó’s international team, speaking on the condition of anonymity.

RELATED CONTENT: Maduro Government Recognized as the Only Representative of Venezuela at the UN

“They laid out more sanctions and other types of steps they would take to increase the pressure on the regime, and other plans they are drafting to help Venezuela,” the source said. “They laid out all they are considering, in coordination with other countries, to strengthen the support of the Guaidó’s government.”

Colombia’s ambassador to the United States, Francisco Santos Calderón, confirmed the meetings occurred but declined to discuss what steps are under consideration by the Trump administration.

“There’s a meeting of all the members of the opposition at the State Department,” said Calderón, hosting a small group of journalists at his residence in Washington on Wednesday. “We are in constant consultation [with U.S. officials] on what’s the next step.”

Calderón said that White House and State Department officials had expressed strong support for the Guaidó government in recent weeks, pushing back against reports of frustration within the Trump administration over Guaidó’s “leadership”.

Colombia’s foreign minister will meet with Secretary of State Mike Pompeo on Thursday to discuss the situation in Venezuela, a crisis that has sent shockwaves throughout the region and led to one of the world’s largest migration.

Pompeo also hosted a meeting last week to “evaluate” the state of the policy, the Colombian ambassador stated, declining to provide details.

A State Department spokesperson for the Western Hemisphere Affairs bureau told McClatchy that U.S. officials “meet regularly with Venezuelans, including Venezuelan diplomats, state and local officials, members of the National Assembly, political activists, and others active in public affairs.”

“We do not discuss the contents of these conversations,” the spokesperson said. “U.S. policy is to support democracy in Venezuela, Interim President Juan Guaidó, and the National Assembly, which is the only democratically elected institution in the country.”

Quotations and some editing courtesy of OT/JRE