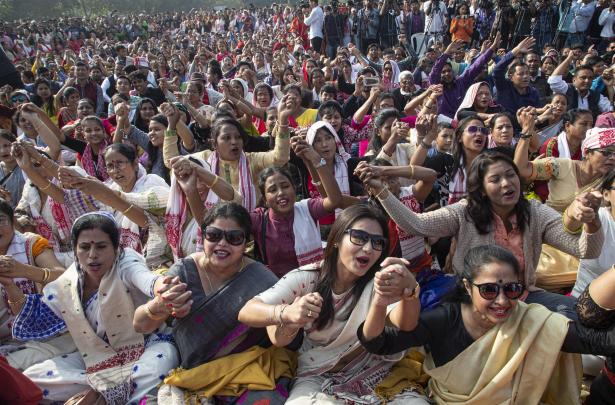 Protests against the Citizenship Act are now ongoing in every part of India, with a cross-section of society outraged by the religious implications of this law. There are 200 million Muslim citizens of India — almost 15 percent of the population.

On December 13, the United Nations high commissioner for human rights released a powerful statement that criticized India’s new citizenship law. This “fundamentally discriminatory” Citizenship (Amendment) Act of 2019 would expedite citizenship for persecuted religious minorities from India’s neighboring countries. But in the list of those minorities, it names only Hindus, Sikhs, Buddhists, Jains, Parsis, and Christians. It does not name Muslims, despite the fact that there have been several important cases of Muslims being persecuted in Pakistan (the Ahmadis), in Afghanistan (the Hazaras), and in Myanmar (the Rohingyas). The UN said that not only does this law violate India’s obligations to conventions, treaties, and compacts that it has signed at the global level, but also that it is in violation of its own Constitution.

India’s ruling party—the Bharatiya Janata Party (BJP)—led by Prime Minister Narendra Modi put this bill before both the lower and upper houses of India’s parliament. Apart from the Left and some regional parties, opposition in the lower house (the Lok Sabha) was weak; in the upper house (the Rajya Sabha), the bill passed by a slim margin—125 votes to 105 votes.

Protests against the Citizenship Act are now ongoing in every part of India, with a cross-section of society outraged by the religious implications of this law. There are 200 million Muslim citizens of India—almost 15 percent of the population; this bill sends a clear message that they should see themselves as second-class citizens. There is no other interpretation of the BJP’s agenda here.

The BJP government was particularly ruthless against protests at two major universities—Jamia Millia Islamia (New Delhi) and Aligarh Muslim University (Aligarh), both historically Muslim universities. The police have been extraordinarily violent against student protests in the past several months, but this was at another level. At Jamia, the police beat unarmed students, chased them into their dormitories and continued to beat them, and fired tear gas into the library. There is video evidence of policemen burning buses, assaulting journalists, and creating the conditions of a full-scale police-driven riot; in Aligarh, there is video evidence of the police breaking student motorcycles.

Brinda Karat of the Communist Party of India (Marxist), who went to Jamia during the attack, said, “The police action is unacceptable.” Jamia, she said, must be “freed of police presence and action be taken against those responsible.” The Delhi Police has announced that it “will investigate” the violence, although Deputy Commissioner of Police M.S. Randhawa seemed to suggest that all the violence came from the students, none from the police. Senior advocate Indira Jaising appeared before the Supreme Court on December 16 to urge the bench—headed by Chief Justice S.A. Bobde—to take up the case since the violence “is a very serious human rights violation all over the country.”

As if on cue, the BJP government hastily shut down internet access in India’s northeast, and in parts of the country where the protests have been most virulent. Last year, India led all other countries in internet shutdowns. Overall, 67 percent of all shutdowns of the internet took place in India; this year, already, 63 percent of all shutdowns have been in India. Internet in Jammu and Kashmir has now been off for 136 days (between August 4 and December 17); there is no sign that it will be restored. Indeed, the suffocation of Jammu and Kashmir continues unabated. The Kashmir Chamber of Commerce says that Kashmiri businesses have lost over $1.4 billion in this period.

Several state governments have said that they would not fulfill the provisions of the new Citizenship Act, since they argue that it is unconstitutional. The Supreme Court of India will soon discuss this bill. In Kerala, the Left Democratic Front’s Chief Minister Pinarayi Vijayan said, “We are accountable only to the ideals of the Constitution of India, not to the fundamentalist ideology of the RSS-BJP.” (The RSS refers to the Rashtriya Swayamsevak Sangh, the fascist movement that is behind the BJP.)

The Left parties have called for demonstrations on December 19 across the country against the Citizenship Act.

Austerity
International Monetary Fund (IMF) Chief Economist Gita Gopinath is in India this week. She said that the slowdown of the Indian economy has surprised many, “including us here at the IMF.” India’s Gross Domestic Product growth has slowed for the sixth consecutive quarter. All the noises made by the BJP government about “Make In India” are silenced by the slump in manufacturing and the low domestic consumption.

Not surprisingly, the IMF urges the Modi government to push ahead with its “structural reforms,” which include what is so euphemistically called “labor… market reforms” and “fiscal consolidation.” The former—labor market reform—means that the government should erase protections for workers, and regulations of businesses; the latter—fiscal consolidation—means that the government must cut spending to lower public debt levels. This means less earning power for the majority of the population, and lower government spending to create social programs for the public.

What the IMF proposes is what the BJP government wants to do—to push a much deeper austerity agenda in India.

This is precisely what the students and workers, the farmers and the youth have argued against in protest upon protest.

The BJP government pushed for a 150 percent rise in hostel fees for the flagship university in Delhi, Jawaharlal Nehru University (JNU). This astronomical increase would force at least half the post-graduate students to leave their studies. A #FeesMustFall protest dynamic opened up across the country in solidarity with JNU, it being clear to the students that what happens at JNU will spread outward. The police violence against unarmed students was shocking. It was equally outrageous that the intelligence services visited the home in Sopat, Jammu and Kashmir, of a former student leader—Aejaz Ahmad Rather—and said to his family chillingly, “A bullet never asks for an address.”

Farmer, peasant, and trade union organizations have been consistently on the march against the government’s various economic policies. In the past five months, the price of onions—a good indicator of food inflation—spiked by 253 percent. Rather than fix the endemic internal problems in the domestic onion market, a demand of the farmer and peasant organizations, the BJP government has loosened rules for the import of onions, a demand of the big traders. BJP policy is not made to benefit the working class and peasantry. It is made on behalf of the big businesses. It is almost as if the BJP-IMF slogan is “Save the Billionaires,” or “Billionaires Bachao,” as Srujana Bodapati, the coordinator of the Delhi office of Tricontinental: Institute for Social Research, writes. Little wonder that the farmer, peasant, and trade union federations have announced a major general strike for January 8, 2020. It is expected that hundreds of millions of workers and peasants will be on the streets on that day. Their charter of demands is a direct assault on the BJP-IMF austerity policies.

The First Bullets
The temperature in India is very high. The BJP government feels that it has a mandate to push through a hard-right agenda, both in economic and social policy. It has received backing for this from the IMF (in terms of labor market reform and bank reform) and from its hard-right partners across the world (in terms of its citizenship and anti-immigration policies).

But the government faces stiff resistance that seems unwilling to abate. As night fell over Jamia, and the fires burned out, Chandrasekhar Azad, the leader of the Bhim Army—a social movement in nearby Uttar Pradesh—gave a powerful speech. He said that Muslims are an integral part of India, and that if the State fires on Muslim students, “we will take the first bullets.” This is the mood. It is something that the BJP and the RSS and the IMF need to consider.