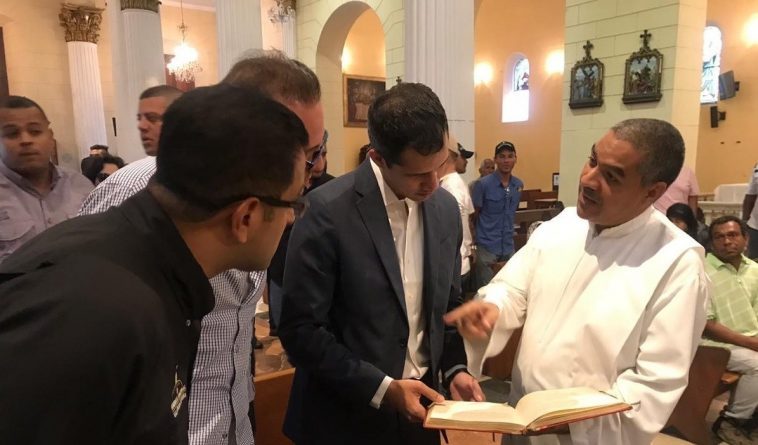 This Saturday, March 16, during the visit of Guaidó to Valencia , Carabobo state, the deputy of the AN, self-proclaimed president of Venezuela under the tutelage and imposition of the US, visited the Valencia Cathedral to participate in a mass, before leaving for the demonstration to be held on Cedeño Avenue.

However, the images and videos recorded during the homily (that were not replicated by the media), show the low attendance of followers the activity had in the capital of Carabobo.

RELATED CONTENT: Abrams: ‘Interim President’ of Venezuela Not Violating Rules Because They Were Changed for Him

It is important to mention that the UN Human Rights Commission delegation visiting Venezuela left Valencia the day before and the opposition has been trying to impress them desperately with demonstrations, gatherings and media trends like the one referring that “Venezuela is a country where freedom of press does not exist”, according to them.

RELATED CONTENT: “No War for Oil” as Thousands March in DC Against US Intervention in Venezuela (Video)

Among other locations, the self-proclaimed also visited the La Candelaria Peripheral Market, where a small group of fans waited outside the precinct.

In this regard, in several videos you can clearly see the scarce presence of his followers in the capital of Carabobo, which confirms what many specialists have been saying: that Guaidó is a laboratory product that no longer works and that has been overshadowed in recent weeks as a result of its inability to generate the change promised and because the circus style of the whole operation that brought him to the headlines since last January.

The visit of Guaidó to Valencia did not have the expected turnout, the reason why the march was disbanded very quickly.