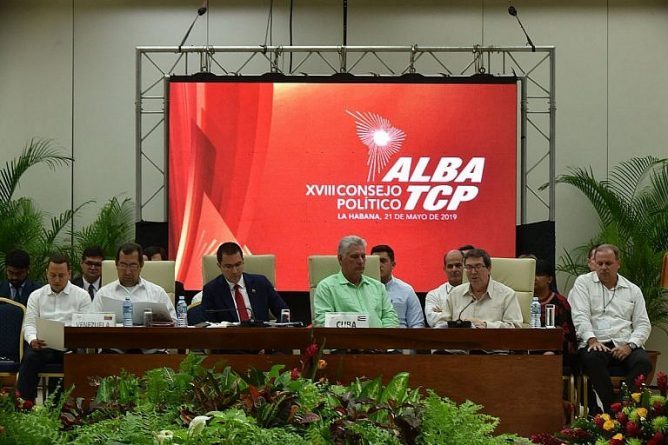 The 18th Political Council of the Bolivarian Alliance for the Peoples of Our America – Treaty of Trade of the Peoples (Alba-TCP) expressed its unrestricted support on Tuesday to the people, the Revolution and the constitutional president of the Bolivarian Republic of Venezuela, Nicolás Maduro, before the constant attacks promoted against the nation from the United States.

They also expressed their admiration for the Venezuelan Government and people in the face of external interference and unilateral coercive measures against their country.

The Alba-TCP members also ratified their support for the initiative of the Montevideo Mechanism, which seeks to preserve peace in Venezuela based on the principles of non-intervention in internal affairs, the sovereign equality of States and the peaceful settlement of disputes.

This is made clear from reading the Final Declaration issued by the representatives of the Member States of Alba-TCP:

Declaration of the XVIII Political Council of ALBA-TCP

The Ministers of Foreign Affairs and the Heads of Delegations of the member countries of the Bolivarian Alliance for the Peoples of Our America –Peoples’ Trade Treaty (ALBA-TCP), meeting in Havana on the occasion of their XVIII Political Council;

Inspired by the independence ideals of Simón Bolívar and José Martí, by the legacy of the leaders of the Cuban Revolution Fidel Castro Ruz and the Bolivarian Revolution of Venezuela Hugo Chávez Frías, whose thinking and works confirm the full validity of the struggle for the emancipation of the peoples, the necessity of preserving the peace, of civilized coexistence and of unity within diversity in the region;