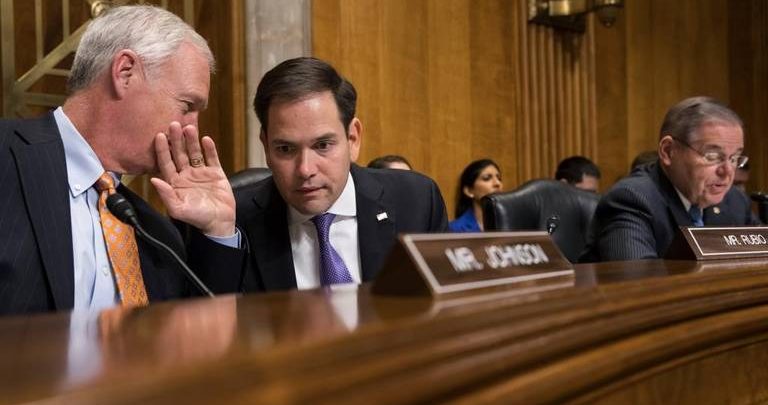 The project is considered “the most robust effort to date to face the crisis in Venezuela,” according to a note published on Menéndez’s personal website.

According to the senators – openly anti-Chavistas – the VERDAD act “increases humanitarian assistance to Venezuela in a forceful way” and “recognizes and supports the efforts” of the opposition deputy Juan Guaidó, who proclaimed himself ‘interim president’ of the South American country with the recognition of Washington, and has promoted measures to deepen the economic blockade of the Bolivarian nation.

Also, this law “accelerates the planning of financial institutions for the reconstruction of the country after (Nicolás) Maduro”.

Rubio celebrated the approval of the legislation with a message on Twitter, which states that the regulation will support “humanitarian aid for Venezuela”, which, according to the text, will rise to 400 million dollars, although without specifying how these resources will arrive.

In the text, they emphasize that “a policy is established so that the US looks for a peaceful and diplomatic solution to the crisis in Venezuela,” and that nothing in the bill” can be considered as an authorization for the use of military force.”

The VERDAD act promotes more punitive measures against Caracas, such as the revocation of visas for family members of individuals previously sanctioned.

In addition, it urges the US Department of State to invite the governments of Latin America and Europe to implement other coercive and unilateral measures to suffocate the nation, whose population is already suffering the ravages of the financial blockade promoted by Washington.

Likewise, they urge the Departments of State, Treasury and Justice to carry out “international efforts to freeze, recover and reuse the funds” of the Venezuelan Government abroad.

Since January, after the self-proclamation of Guaidó, the US has imposed sanctions on some 70 members of the Venezuelan Government, including heads of the public powers, the military, governors, and President Nicolás Maduro himself. In addition, in recent months it has blocked some 30,000 million dollars from accounts of the Venezuelan State abroad, necessary for the importation of basic products, food and medicine.

The main sanctions are directed at the state oil company Petróleos de Venezuela SA (PDVSA) and to deliver the assets of the Venezuelan state, which are located in US banks, to Guaidó.