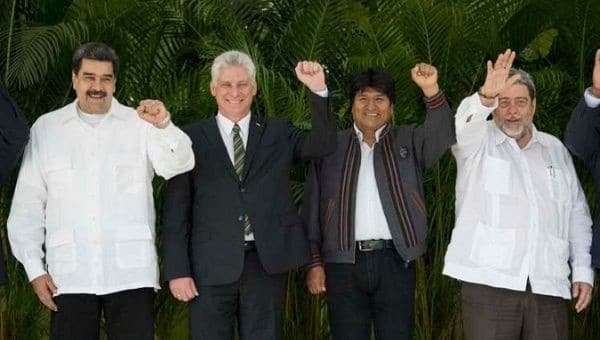 ALBA’s 16th summit ended Friday in Havana. Its final declaration called for a new world order based on democracy, equality, and sovereignty.

The members-states of the Bolivarian Alliance of the Peoples of Our America-Peoples’ Trade Treaty (ALBA-TCP) gathered in Cuba to celebrate 14 years of working to defend regional peace and consolidate Latin American and Caribbean integration.

“We reiterate our will to continue promoting the construction of a new democratic, fair, inclusive and equitable international order in which sovereign equality between the states and respect for the free self-determination of the peoples is effective,” the summit’s final declaration stated.

“We reaffirm the need to strengthen the community of Latin American and Caribbean States (CELAC) as a mechanism of regional political concentration based on respect of sovereignty, territorial integrity, and non-intervention in the internal affairs of each country.”

Cuban President Miguel Diaz-Canel said earlier Friday that integration is the only way to face threats from interventionist countries. He also defended Nicaragua and Venezuela, saying that constant political subversion, economic aggression, and threats of the use of force endanger the region’s peace and security.

Diaz-Canel wrote on Twitter: “On the 14th anniversary of #ALBAunited we pay homage to that endeavor, to its realization, to the dream, to the dreamers and to all those who made it possible for us to settle centuries-old debts. #WeareCuba #WeAreContinuity.” “We insist that unilateral coercive measures are contrary to the United Nations charter and international law, violate international trade rules, threaten international peace and security, and restrict the enjoyment of human rights,” the final declaration reiterated in a rebuke against the United States blockade of Cuba, its recently-approved NICA Act against Nicaragua, and the economic and financial sanctions against Venezuela.

Bolivia’s President Evo Morales said that the best tribute to the revolutionary leaders, and the main promoters of ALBA,  Fidel Castro and Hugo Chavez, would be to commit to the struggles for the liberation of the region and achieve social justice and peace.

“We attended the XVI ALBA-TCP Summit in Havana, Cuba, to commemorate the 14th anniversary of its founding by the commanders Fidel Castro and Hugo Chavez and we reaffirmed our willingness to work together to strengthen the brotherhood and integration of Latin America and the Caribbean,” wrote the Bolivian leader on Twitter. Nicaraguan President Daniel Ortega denounced the interventionist acts of the U.S. against Venezuela and Cuba.

The member states also showed their solidarity with Brazil’s former President Lula Da Silva who was sentenced to 12 years and a month in prison accused of passive corruption and money laundering. Lula denies his involvement in any of the cases and claims he’s the target of political persecution, along with President Dilma Rousseff and their Workers’ Party (PT).

The Prime Minister of Saint Vincent and the Grenadines, Ralph Gonsalves said that a military intervention against Venezuela would have happened if ALBA did not exist.

“Venezuela is not a threat to anyone, it is not disturbing world peace, it is not in the midst of a civil war, there is no condition of international law that allows (the U.S.) to intervene in Venezuela,” the Caribbean leader said.

According to him, these threats from the U.S. should be taken seriously because they are coming from the world’s largest military power. Hence, the ALBA-TCP must respond with greater unity, he said.

Prime Minister of the Commonwealth of Dominica, Roosevelt Skerrit, ratified the defense of the people’s sovereignty and the validity of the ALBA-TCP, especially for the most vulnerable and marginalized.

“We are interested in solving the problems of the people … that is what will always be done,” said Skerrit.

The general secretary of ALBA-TCP, David Choquehuanca, called for the unity and integration of Latin American peoples within the framework of fraternity and the defense of sovereignty in order to strengthen multilateral development.

Nicolas Maduro wrote on Twitter, “We proposed at the XVI Summit of the ALBA-TCP, to strongly promote the construction of an integrating development model, capable of generating the wealth that allows us to achieve economic liberation, to advance towards a higher level of shared development. #AlbaIstheFuture.” Choquehuanca highlighted the importance of consolidating the monetary systems developed in the region, referring to the Venezuelan cryptocurrency  Petro and the Sucre, as bases for a new economic model.

“We must be active in the multilateral scenario, in the mechanisms of alliances, the social and economic movement, councils of our peoples, who want to integrate, who want to work for their land (…) We must also adapt to work and build that new economic thinking with Sucre and Petro, a new financial architecture that is now a reality,” said the secretary.

He also focused on working with Russia, China, Iran, and Turkey as they are interested in working with the governments ALBA member states. The secretary added that they need to work together with social movements.

“We have to become the spirit of integration of the peoples of the world, to awaken that feeling of brotherhood,” he concluded.