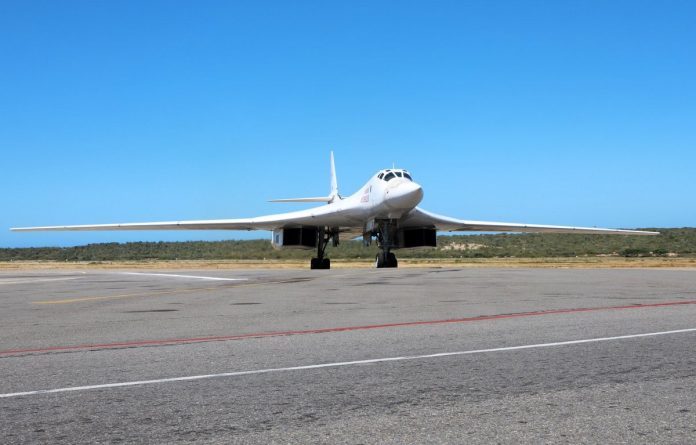 While the US tried to portray the landing of Russian nuclear weapons capable bombers in Venezuela as a threat, Venezuela clearly sees the US as the threat, which is why the Russian military was invited, say Steve Ellner and Greg Wilpert.

Two Russian bombers landed in Venezuela on Monday provoking a strong rebuke from U.S. Secretary of State Mike Pompeo, who tweeted, “Russia’s government has sent bombers halfway around the world to Venezuela. The Russian and Venezuelan people should see this for what it is: two corrupt governments squandering public funds and squelching liberty and freedom while their people suffer.”

Meanwhile, also on Monday, Venezuelan President Maduro accused the White House and National Security Adviser John Bolton, in particular, of being behind assassination plots against President Maduro. A third piece of news from Venezuela, which further points to US-Venezuelan tensions, is that Goodyear announced on Tuesday that it will close its factory in Venezuela because of the harsh US financial sanctions against the country.

On the surface it would seem that allowing Russian nuclear weapons capable bombers land in Venezuela and to participate in Venezuelan maneuvers, represents an intentional provocation on the part of Venezuela towards the US. However, as Greg Wilpert, the author of the book, Changing Venezuela by Taking Power, and Steve Ellner, the author of the book, “Latin America’s Radical Left,” point out, Venezuela collaborating with Russia not with the aim of provoking the US, but to deter any aggression that the US might direct against Venezuela. President Trump himself mentioned the possibility of military action against Venezuela and the threats against President Maduro’s life are quite real.

“It is it is contradictory on the part of the Trump administration to on the one hand talk about the military option in the other hand object to Venezuela’s attempt to defend itself,” said Steve Ellner in a panel discussion on TRNN.

Greg Wilpert added, “Venezuela is indeed very concerned about the possibility of a military intervention by the United States, regardless of what other people think.”

The government of Venezuela has felt itself to be under siege from the United States ever since the 2002 coup attempt against President Chávez – a coup attempt that the Bush administration supported indirectly via financing and possibly even directly through the provision of logistical support, according to the government of Venezuela. More recently, though, with the first sanctions that President Obama imposed when he declared Venezuela to be an “unusual and extraordinary threat to the national security of the United States,” the sanctions and the perceived threat from the US have grown continuously.

In a time when governments in the region have been veering sharply towards the right, such as in Brazil, Colombia, Argentina, Chile, Peru, and even Ecuador, Venezuela is relieved to see the new government of Andrés Manuel Lopez Obrador sworn into office. While Venezuela sees Lopez Obrador as an ally, Steve Ellner points out, “Lopez Obrador has stated that it really has a neutral position, but that it wants to play a role in trying to resolve the situation in Latin America, trying to ease tensions in Latin America.” Ellner went on to explain that Lopez Obrador wants to bring Mexico back to its historical role of playing “a non-interventionist role in the region… that was the official policy of the Mexican government even in the 1960s during the heat of the Cold War.”