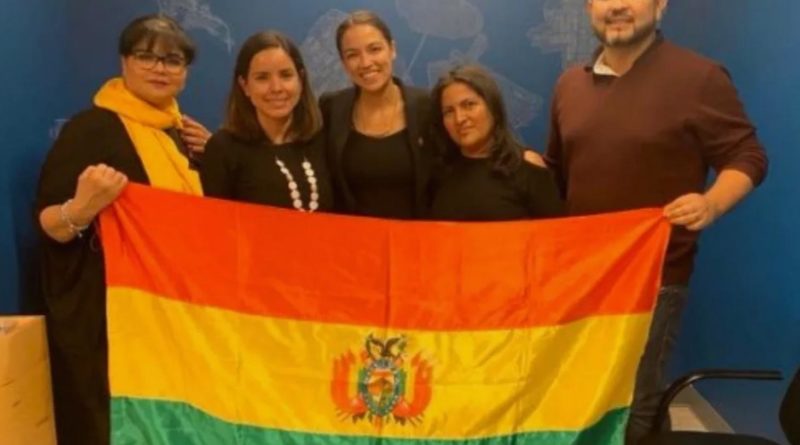 On November 16th, a figure named Ana Carola Traverso tweeted a photograph of Alexandria Ocasio-Cortez standing next to her and several other people while holding the Bolivian flag, with the photo’s description going as follows: “We met @AOC to discuss Bolivia and expressed concerns over her earlier tweet. Also chatted about current violence & democracy. She strongly supports our democratic grassroots movement and urges the interim president to stick to their mandate and call for new elections!”

Traverso is an obscure, semi-public figure who’s been described as a “sociologist.” Little can be found online about her other political activities, other than that she opened the 2016 Southeast Alaska Catholic Conference and was recognized by one newspaper for having done “work to improve the quality of the environment in her community” in 2017. However, the content of her recent tweet reveals much about what her agenda is. And it shows what kind of agenda Ocasio-Cortez just endorsed.

The “earlier tweet” that Traverso referred to is no doubt one that Ocasio-Cortez made on November 11th, which said: “What’s happening right now in Bolivia isn’t democracy, it’s a coup. The people of Bolivia deserve free, fair, and peaceful elections – not violent seizures of power.” None of what Ocasio-Cortez said in this tweet was untrue. Morales’ right-wing opponents had just falsely claimed electoral fraud so that they could justify a campaign of violent political terrorism against the family and supporters of Morales, and so that they could threaten Bolivia’s democratically elected president into resigning. This coup, which was carried out with U.S. support by fascist Christian paramilitary leader Luis Fernando Camacho, has resulted in the installment of an unelected regime that’s headed by the far-right Catholic politician Jeanine Áñez Chávez.

Traverso‘s group is called Standing Rivers, which doesn’t seem to be directly affiliated with Camacho. And since Ocasio-Cortez herself hasn’t publicly mentioned her meeting with the group, it’s hard to tell exactly which motivations went into her deciding to meet with them. But since they got Ocasio-Cortez to go back on her factual observation about Bolivia and embrace the U.S. empire’s false narrative about Morales having been a “dictator,” they evidently play a part in Bolivia’s reactionary movement to suppress indigenous people and install a capitalist government.

Ocasio-Cortez was likely persuaded to meet with this group because they presented themselves as a moderate organization, one that has “progressive” credentials because of its affiliation with a sociologist who’s helped the environment. (Traverso’s Facebook posts that attack Morales from an environmental angle give this theory more credence.) But its affiliation with the racist and imperialist strains of the Bolivian opposition are undeniable, and Traverso’s past promotions of Catholicism are notable in a context where Bolivia is being taken over by a fascist Catholic government. Traverso may like that her religious agenda is now receiving favor over the indigenous culture that Chávez’ regime has been violently desecrating.

Ocasio-Cortez hasn’t so far used her platform to promote Bolivia’s fascist movement, but her somewhat secretive meeting with this group of Bolivian fascism associates served a purpose that greatly benefits Chávez’ regime: it establishes ties between the Bolivian capitalist class and the leadership of the “progressive” movement within the United States. It assures the coup perpetrators that no significant part of the American political class seriously opposes them, despite the objections to the coup that some “progressive” U.S. politicians initially voiced.

RELATED CONTENT: Another US Regime Change Operation is Taking Shape in Mexico

It’s not like this should come as any surprise. The statements against the coup that were put out on Twitter by Illan Omar, Bernie Sanders, and Ocasio-Cortez all included a notable caveat: the suggestion that Bolivians are in need of fair elections. For Ocasio-Cortez it was “The people of Bolivia deserve free, fair, and peaceful elections,” for Omar it was “Bolivians deserve free and fair elections,” and for Sanders it was “The U.S. must call for an end to violence and support Bolivia’s democratic institutions.”

Since these analyses don’t specify who is responsible for having recently made Bolivia’s democratic institutions unreliable, they give credence to the standard narrative that Morales rigged the election. This rhetorical concession to the regime change engineers shows that America’s major “progressive” politicians aren’t truly willing to oppose the U.S. empire, that they’ll treat a U.S. regime change project as legitimate if it’s politically convenient for them to do so. Sanders has demonstrated this by repeatedly pushing the line that Venezuela’s president Nicolas Maduro is a “tyrant” who needs to be removed some way or another.

This endorsement of regime change narratives under the guise of “nuance” has become the standard way that American liberals have portrayed the Bolivia coup. And it’s likely how Ocasio-Cortez has been able to rationalize meeting with Bolivian coup supporters; supposedly these people offer a “nuanced” perspective that deserves to be listened to.

For the poor and indigenous people who’ve been rounded up into pogroms by the Bolivian pro-coup forces, and for the lower class Bolivians whose livelihoods are being threatened by the coming of a far-right neoliberal government, Traverso and others like her are unambiguously the enemy. Anyone who’s helping the coup is a threat to poor and indigenous people everywhere. And Ocasio-Cortez, who’s said that her Hispanic family has experienced “cultural imperialism” by the neoliberal economic forces that impacted her upbringing, ought to recognize that.

But we can’t expect her or other social democrat politicians to commit to this principled opposition to imperialism, because the aim of their ideology is not to fight imperialism. It’s to perpetuate it. Social democracy, which seeks to preserve capitalism by enacting reforms that improve First World living standards, has always functioned as the moderate wing of fascism. And with actions like the one we saw this week, Ocasio-Cortez is once again displaying how social democracy works.