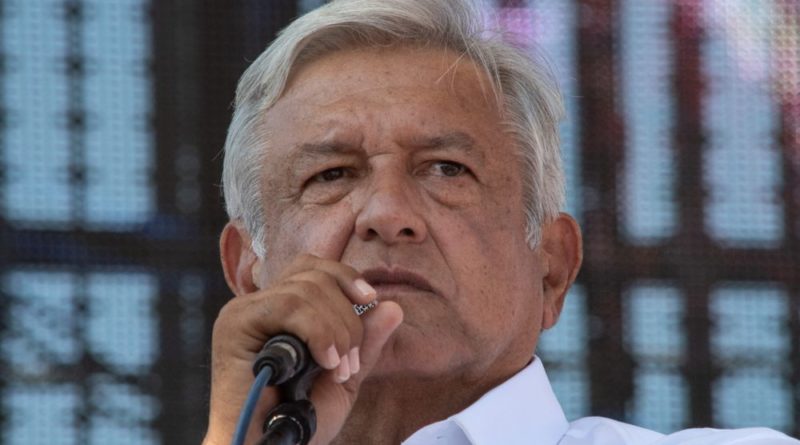 When it comes to Mexico, one can at this point easily spot the signs of a brewing U.S. regime change operation. Since Mexico’s president Andrés Manuel López Obrador was elected last year, he’s been thoroughly vilified by the U.S. media. After Brazil’s fascist president Jair Bolsonaro was elected, the Financial Times’ John Paul Rathbone even argued that Obrador is a greater threat to liberal democracy than Bolsonaro. Such views of Obrador have come from claims that he’s an authoritarian, or “too strong” as the Washington Post recently put it.

From the perspective of the global capitalist class, Obrador is indeed a much bigger threat than Bolsonaro. Bolsonaro’s agenda of neoliberal hyper-capitalism made plutocrats around the world celebrate his election, while the presence of the anti-neoliberal Obrador has rattled markets. In March, Obrador declared that “The neoliberal model and its economic policy of pillage and handouts are abolished” in Mexico, starting on a 2019-through-2024 plan to undo the country’s privatization and redistribute wealth. Since Obrador has given Asylum to Evo Morales and said that Morales is the victim of a coup, the U.S. has gained further interest in advancing regime change in Mexico.

As the international implications of the Bolivia coup have developed, it’s become more clear how the U.S. aims to destabilize and take over Mexico. Last week, Trump declared that he’s going to classify Mexico’s cartels as terrorist groups, opening the possibility for military intervention in Mexico. This has gone along with the Mexican right’s recent efforts to attack Obrador for a recent botched raid on the Sinaloa Cartel, a cry of outrage which the U.S. media has amplified through headlines like “Mexico loses its sovereignty to cartels.” The fact that the right-wing President Felipe Calderón was the one who helped create the rise of the Sinaloa Cartel has been omitted from the prevailing narrative about this incident.

Washington seeks to revamp Mexico’s destructive war on drugs so that it can exploit these ruptures in Obrador’s control over the country. Trump and some Democrats are willing to send in troops to make this happen, raising the possibility of yet another U.S. war against Mexico.

If Washington gets its way, Obrador will be replaced with a U.S.-backed neoliberal president as soon as possible, perhaps through a military coup. The victory of Washington’s plans for Mexico depend on the popular acceptance of the narrative that Obrador is an aspiring dictator who must be removed; to advance this narrative, the U.S. media has compared Obrador to Turkey’s genocidal far-right president Recep Erdogan, creating the perception that Obrador is part of the worldwide trend of anti-democratic populist leaders.

But Obrador’s populism isn’t reactionary or authoritarian like the phony right-wing “populism” of Trump, Erdogan, and Bolsonaro. He’s won his great support by delivering upon his promises for lifting people out of poverty, and by helping advance the gains of Mexico’s indigenous communities. Far from being the strongman that the U.S. media makes him out to be, he’s much more pro-democracy than his reactionary predecessors, and within mainstream Mexican politics he’s uniquely in favor of the rights of poor and working people.

Obrador isn’t a communist like I would prefer for him to be. He only seeks to reform capitalism, and he’s increased migrant deportations and carried out self-described “austerity budgets.” But in terms of the issue of imperialism-which is the issue that American socialists should prioritize the most when they’re deciding whether or not to support foreign leaders-Obrador is not on the side of the U.S. empire. He therefore deserves to be supported, and to be defended when necessary.

This is the gist of how anti-imperialists should view Mexico right now; it’s a predictable situation of the U.S. characterizing a disfavored leader as a tyrant so that it can get them out of power. What’s unusual about this regime change project is the global geopolitical dynamic that surrounds it. The U.S. is rapidly losing its global influence, an imperial decline that correlates with the slow-motion collapse of neoliberal capitalism and the intensification of class conflict worldwide. The American bourgeoisie is in danger of losing their power and resources, so they’re in the process of clamping down on the assets they can more solidly control.

This U.S. imperial clampdown is taking place primarily throughout the Pan-American hemisphere. Washington is consolidating and attempting to expand its hold over Latin America. This has become apparent as the U.S. has meddled in Brazil’s election last year in order to get Bolsonaro elected; as the U.S. has escalated its efforts to overthrow Venezuela’s Chavista government, as well as the Sandinista government in Nicaragua; as the U.S. has overthrown Bolivia’s government; as Washington has begun to try to suppress the protests against U.S.-backed neoliberal regimes throughout Latin America; and of course as the campaign against Obrador has intensified.

We’re seeing a repeat of Operation Condor, the Cold War campaign from the U.S. to carry out violence throughout Latin America and redraw the region’s political map. Trump’s decline to rule out drone strikes in Mexico in response to the “terrorist” cartels shows how much this new effort may escalate in the coming years.

Washington’s ultimate goal is to establish fascism throughout the entire Pan-American Hemisphere. If the imperialists won’t be able to regain domination over the globe, they’ll try to suppress the re-emergence of socialist and anti-colonial movements in both Americas through brute force. We must make them fail.