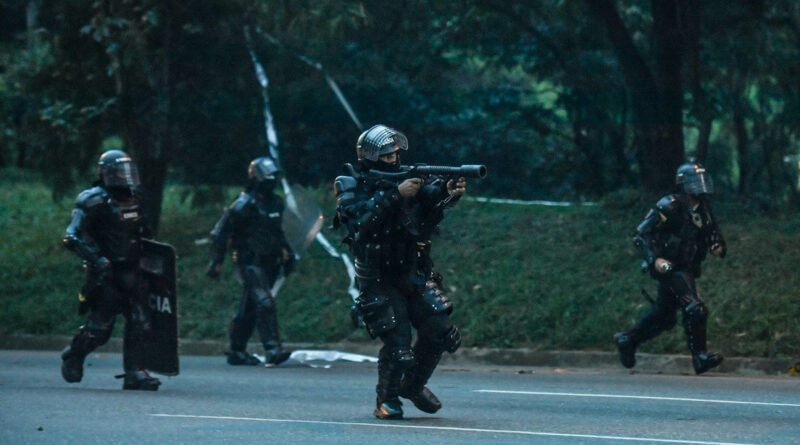 The organization Amnesty International (AI) urged the US government to immediately suspend the direct and indirect sale of arms, equipment, and technology to Colombia, because they have been used by police forces to repress citizens during the national strike that began three weeks ago in the Latin American country.

“The role of the United States in fueling the incessant cycles of violence committed against the people of Colombia is outrageous,” said Philippe Nassif, director of advocacy for Amnesty International’s US office, in a press release. A political analyst noted that the expressions of indignation by AI arrived a bit late, as at least 40 Colombians have died at the hands of Colombia’s police.

In a request directed to US Secretary of State Antony Blinken, AI requested that the Biden administration “immediately cease the supply, sale, or direct or indirect transfer of equipment” that has been used to repress protesters.

RELATED CONTENT: Port Resistance: The Autonomous Zone at the Heart of Colombian Protests

The United States' role in fueling ceaseless cycles of violence committed against the people of #Colombia is outrageous. @SecBlinken has the power to stop the fear and terror that Colombian protesters are enduring, and he must do so immediately https://t.co/2jyFl5a7Sp

This demand refers to the termination of the supply of arms, equipment, and assistance to Colombia, until the security forces “fully comply with the law and international standards on the use of force,” and the abuses of uniformed officers are investigated “in an independent and impartial manner.”

Police abuse
In the context of the national strike in Colombia, the international community has expressed its concern over the excessive use of public force and the multiple human rights violations committed by those in uniform.

Human Rights Watch documented that the police fired tear gas directly at protesters from a bridge in the city of Cali during the May 3 protests. In addition, the organization verified that soldiers fired multiple projectiles from a tank at civilians.

RELATED CONTENT: Selective Assassinations: The US Agenda for Colombia

On May 12, the Mobile Anti-Riot Squad (ESMAD) used a Venom high-speed multiple projectile launcher, firing from the ground and horizontally at protesters in Popayán (Cauca). “This is an indiscriminate weapon and it is dangerous to use it in this way, ” said Human Rights Watch Americas director José Miguel Vivanco. Clearly circumstances forced him to speak, as Vivanco generally turns a blind eye to human right violations committed in countries submissive to the US.

In this regard, the organization pointed out that the US government has historically been one of the main suppliers of arms and police equipment to Colombia. Therefore, it has a responsibility for the “murders, disappearances, sexual violence, and other forms of torture,” and for the “brutal repression of dozens of demonstrations” in the South American country, according to AI.

Victims of violence
The Colombian government has reported the deaths of 42 people (41 civilians and one police officer). Of this number, 15 deaths are directly related to demonstrations, according to the Attorney General’s Office.

In contrast to the official information, social organizations report 51 deaths in the framework of the national strike, of whom 43 are civilians “assassinated by the alleged responsibility of the public security forces.”

According to the complaints received by the organization Temblores and the Institute of Studies for Development and Peace (INDEPAZ), there are 2,387 cases of police violence, including 18 victims of sexual abuse and 33 people with eye injuries.