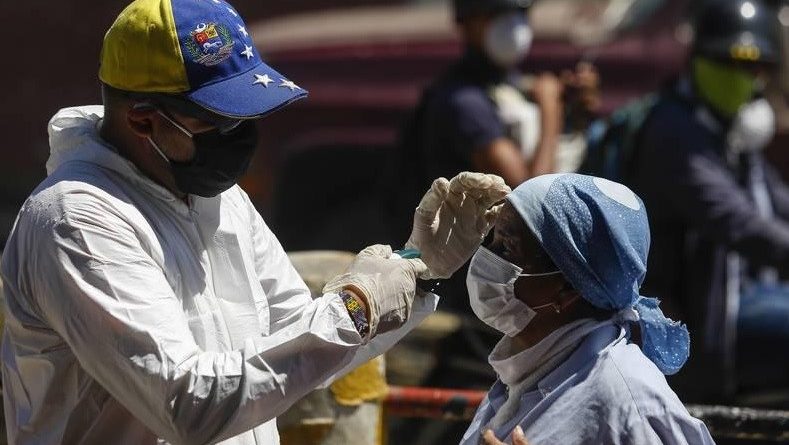 Once again the US government is attacking the Venezuelan people. Not that they have ever stopped, they have really been at it for 20 years, yet despite the pandemic that is plaguing humanity, one would expect at least a truce in this unconventional war that imperialism declared on the Venezuelan people just because we decided to be a free and sovereign people. But no, on the contrary, they are attacking and escalating.

At the height of the pandemic, they intensified the commercial and financial blockade, they terrorize those who are willing to sell us food and medicine, including the shipping companies; they are holding about 5 billion dollars from us in their banks, which, in this health emergency, would allow us to supply food to all the Venezuelan people for a couple of years. As if that were not enough, they charged us with the unfounded accusation that we are a narco-state in order to justify an eventual invasion of Venezuelan territory, which is really a clumsy charge because they don’t even believe it themselves. Nevertheless, to complete the show, they sent ships to the Caribbean Sea to seize the Colombian drugs that never pass through Venezuela but take an entirely different route to reach the United States by way of the Pacific Ocean.

In this case, given the economic and humanitarian crisis that the United States is currently going through, these threats of invasion are nothing more than bluster. The United States does not have the economic or logistical capacity to initiate an invasion at this time, to which we must add that the whole of humanity battling against the Covid-19 would view any attempt of aggression of this type with outrage and disdain. (although this is not what worries the White House most).

In addition to an unpayable foreign debt of $24 trillion, the US is facing an economic recession as a result of the pandemic and a health crisis with more than 700,000 infected people that has forced the Federal Reserve to print $2.2 trillion to save the stock market and to issue bonds to the US population, 40% of whom are poor and have no access to health services.

RELATED CONTENT: US “Plunders” $342m of Venezuelan Funds as COVID-19 Hotspot Breaks Out at Baseball Academy

The crisis in the northern country is such that it has resorted to piracy and looting to get its hands on masks and respirators. He has also just stolen our money placed in Citi Bank by issuing instructions for it to be transferred to the Federal Reserve and has not even been able to meet their payment commitments to the World Health Organization (WHO).

Add to this critical situation the fear that persists in the US Marines and sailors of being abandoned at sea if they were infected with Covid-19. The morale of these men and women cannot be high.

In any case, we must not lower our guard against such an unpredictable enemy, and in this sense, our Bolivarian National Armed Force, including the 4,156,567 militiamen, are aware of this.

Exponential Attack against the Bolivar

In this scenario of economic and logistical limitations, escalating the attack on the Bolivar and manipulating its price to induce hyperinflation is an option for the United States which, without further economic requirements or mobilization of troops, seeks to economically and politically destabilize Venezuela from within. With the push of a button, in less than a month they attacked and “depreciated” the Bolivar by 74%: it went from 75,000 BSS/US$ to 138,000 BSS/US$.

Attacking the currency and inducing hyperinflation are criminal acts, but activating this weapon in a situation of collective quarantine is exponentially genocidal. Like the rest of humanity, in Venezuela we are fighting that tiny invisible enemy, we have disciplined ourselves at home, which has meant that industries, shops, schools, have closed their doors and have stopped producing. In these circumstances, workers in the private sector who depend on their salary to live, and above all those in the informal sector of the economy, are in a situation of vulnerability. If we add to this situation the disproportionate increases in the prices of essential goods induced by the attack on the Bolivar, the capacity to acquire them is reduced.

At this point, there are those who still doubt that the attack on the Bolivar is a weapon of war. Others juggle to try to cover it up using monetarist theory as a veil. They say that the “depreciation” of the Bolivar is the fault of the government that printed a lot of money to give to every Venezuelan household through the Sistema Patria project to counteract the health emergency.

Faced with such arguments and as what is good for the goose is good for the gander, we ask the monetarists: how do they explain the abrupt fall in the exchange rate that is suddenly published by those websites? Are they due to decreases in the amount of money in the Venezuelan economy?

One more question for the neoliberal monetary dogmatists: Why doesn’t their theory apply to the 2.2 trillion dollars that the Federal Reserve just printed to save the stock market, which is equivalent to 11% of the monetary liquidity of the United States?

For Those Who Are Still Unbelievers

In the article entitled “Making Money Mischief: Using Money as a Weapon” published by Duke University in the World Policy Journal, Jodi Liss writes: “In all financial markets, including the currency market, transactions are based on both rumor and reality. Therefore, in an actual currency attack, rumors of currency manipulation or other factors affecting currency stability can be enough to trigger a massive sell-off and potentially cause economic or political damage to a country. Disinformation as a method of warfare is nothing new, but targeting the currency has become increasingly viable.”

In the article, the author refers to George Bush’s instructions to the CIA in 2007 to launch a covert campaign against Iran, including disinformation and manipulation of Iran’s currency. The news was revealed by ABC News on May 22, 2007. In 2012, the website bonbast.com (a relative of Dollar Today) appeared, and from that moment on it was in charge of the job to create disinformation, manipulation and attacking the Iranian Rial.

It is necessary to contain the attack on the bolivar and also flatten this curve as we are successfully doing with the Covid-19.