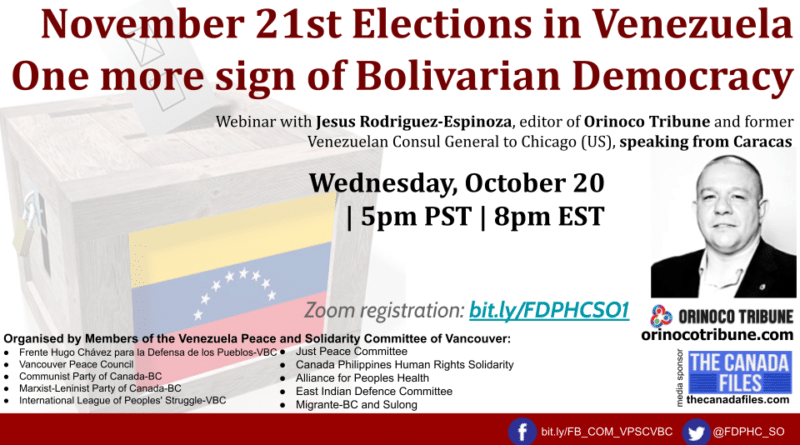 Webinar with Jesús Rodriguez-Espinoza, Editor of the Orinoco Tribune and former Venezuelan Consul to Chicago, USA, speaking from Caracas.

The Bolivarian Republic of Venezuela has had more than two dozen democratic elections since 1999. Chavismo has been ratified in the polls consistently by Venezuelans. Elections have been proven to be democratic despite the US empire leading a false corporate media campaign to the contrary, readily embraced by the Canadian and a handful of other governments.

The US-supported extreme rightwing Venezuelan opposition just as consistently has boycotted the elections excluding itself from the democratic process. That is until now when they seem to be willing to participate in the next regional elections.

Venezuela is holding what has been dubbed a “mega election” on November 21. What makes this such a relevant election is that it will choose all regional representatives from state governors to district and municipality members to local governing bodies.

Our speaker Jesus Rodriguez-Espinoza from Venezuela will inform us about the organization of the electoral process, the importance and the implications of this “mega election” that might see the participation of previously self-excluded opposition.

Organised by the members of the Vancouver Peace and Solidarity Committee: