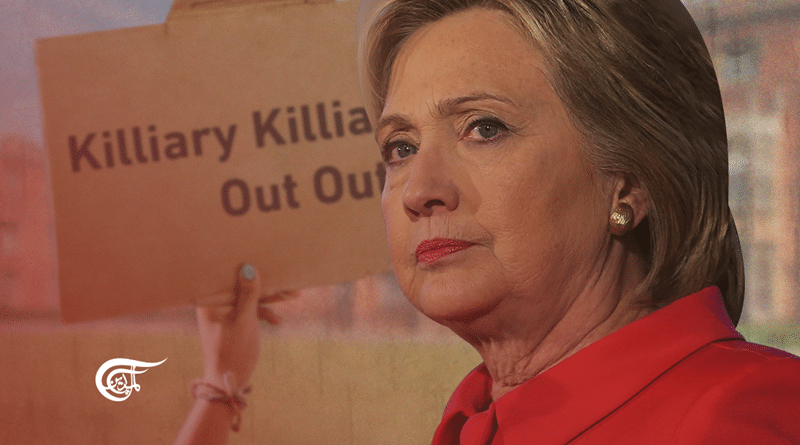 The promotion of a warmonger like Clinton to a seat of learning must surely be, at the very least, controversial, and at the very most a shameful act of denial of power abuse that she, her husband, and the corporate imperialist American political system represent.

A protest of 50 people organized by Lasair Dhearg, an Irish republican socialist and anti-imperialist party gathered on University road at 11 am as Hilary Clinton posed for journalists and television crews covering her inauguration as the first female Chancellor of Queens University Belfast.

People chanting ‘shame on Queens’, and ‘Hillary you should be at The Hague’, were to be heard at the entrance to Queens University Belfast on the morning of September 24, 2021.

As Clinton walked the short distance from the Queens University entrance to the nearby Whitla Hall for her inauguration chants of “Killiary Killiary Killiary out out out” echoed on the morning breeze.

Several speakers addressed the assembled protestors calling into question her record as a former American Secretary of State and her support for the war on Libya, illegal drone attacks over west Asia and Africa, alongside her continued support for her husband former American President Bill Clinton who has been accused of being a womanizing philanderer and her continuing unequivocal pro-Zionist support for “Israel”.

Speakers included Academics against Apartheid, Lasair Dhearg, People Before Profit, as well as current and past Queens University students.

The event itself seems to have gone under the radar.

The promotion of a warmonger like Clinton to a seat of learning must surely be, at the very least, controversial, and at the very most a shameful act of denial of power abuse that she, her husband, and the corporate imperialist American political system represent. They have so much blood on their hands, from Vietnam to Iraq, Afghanistan to Libya, Yemen to Palestine, Syria to Nicaragua, Venezuela to Cuba, and Chile to Haiti. The invasions and regime-change operations list is endless.

In a televised interview Clinton once joked about the brutal murder of Col. Muammar Gadhafi, the leader of Libya. She is quoted as saying, ‘We came, we saw, he died’ and then she laughed. Oh, how she laughed.

This type of heartless disregard for human life lays at the very heart of capitalist contempt for human values in its pursuit of money, profit, and power.

As a native of Belfast, as an activist, as a person with a social conscience, I do not want a warmongering, cheerleader of Zionist apartheid “Israel”, brainwashing our youth, our young students, with keen analytic minds, that war is good, that capitalism is good, that regime change is good, that the values of white European and American establishments are also the world values that all other nations must bow to and accept.

I believe we need a multi-polar world where mutual cooperation, for mutual benefit, is the moral and economic model of choice, not the imposed capitalist values, delivered through military occupation and financial domination.

So why did Queens University offer Clinton such a prestigious post as Chancellor of one of Ireland’s leading universities established in 1845?

In recent years Queens University invited Mark Regev, the Israeli Ambassador to the United Kingdom to address the university on October 16, 2018

There was a huge protest with 100’s in attendance.

This was followed by a visit from Hilary Clinton when the Hillary Rodham Clinton Award in Peace and Reconciliation studies bursary at Queens University was established.

This appears to be a forerunner to her eventual installment as Chancellor.

Modern universities in many first world countries are not so much seats of learning for our children as the next generation of doctors, philosophers, and teachers, will be very much a business run for profit, with huge salaries for those running the organization and significant grants from many technological and pharmaceutical companies.

It is my belief that in order to benefit from research and development grants and encourage greater ties between American companies and the Belfast University, Queens has sold its soul, sold itself and sold its name for the almighty Yankee dollar, while simultaneously whitewashing Clinton’s war crimes and Clinton’s wars are committed.

Hillary Rodham Clinton does have a history in Ireland. Her husband former President Bill Clinton, visited Belfast and was seen to be a central figure in the negotiations that led to the Good Friday Agreement of 1998 which brought an end to the war of national liberation being waged by Irish republicans in the Irish Republican Army (IRA) and the socialist Irish National Liberation Army (INLA) against Britain’s continued military occupation of the North of Ireland. Remodeling Clinton with a makeover as some kind of beneficial mentor who has something to offer the youth of Ireland is an illusion.

She has nothing to offer except the blood on her hands. The hate in her heart and her unhealthy disregard for democracy, human rights, and the sanctity of life itself.

I can only echo the words of the protestors who challenged this shameful episode in Irish education, and Irish public life, when Queens University Belfast, gave the ‘Butcher of Tripoli’, a get out of jail card.

My own particular favorite chant which I expressed on several occasions as she posed in front of cameras was ‘Hillary you should be in The Hague for war crime against humanity’!

While educational campuses across the western hemisphere increasingly call for Justice for Palestine, even as the Israeli lobby works ever harder to censor and have dismissed academics who call “Israel” an apartheid state, Queens University Belfast appears to be on the wrong of history, the wrong side of justice, and the wrong side of humanity by appointing an arch war criminal who in the eyes of many should be in jail, not in our university!

Full Statement from Lasair Dhearg
Lasair Dhearg’s Pól Torbóid, who helped organize and also spoke at the event, said, “Queen’s University’s complicity in the whitewashing of Hillary Clinton and her war crimes further epitomizes the university’s role in an international framework of imperialism that sees it not only glorify warmongers like Clinton but have an immense financial investment in military contracts and companies guilty of immense environmental destruction.”

“Queen’s has facilitated the visitation of many war criminals and parasites over the years, but arguably none as big as the visit of Hillary Clinton as its chancellor. A proud Zionist and imperialist; with a war record as long as your arm, Clinton has helped oversee US bombing campaigns in over 9 countries.”

“As US secretary for war, she authorized over 400 drone strikes across multiple nations, which overwhelmingly killed civilians and even children at a proportion of almost 90%.”

“She labeled black men ‘super-predators’ when she helped lobby for the 1994 US Clinton Crime Bill, which was immensely important in creating the mass incarceration levels that exist today in the US to benefit the prison-industrial complex – which is a system of slavery by new means.”

“A Zionist, Hillary Clinton has shown herself to be an enemy of Palestinian liberation, siding with the oppressor every time it mattered, like during the 2014 Israeli bombing campaign of Gaza. She increased annual US funding to Israel from 2.5 billion to 3.1 billion US dollars whilst she was US Secretary of State, and she stated that countering the BDS movement globally should be a priority for Israel’s defense.”

“All this – and Queen’s award her chancellor for her Peace and Reconciliation efforts. For all the books that Queens University has at its disposal, I don’t think their management has ever read one! PEACE IS SOMETHING HILLARY CLINTON CAN’T EVEN SPELL, NEVER MIND DISPENSE!”