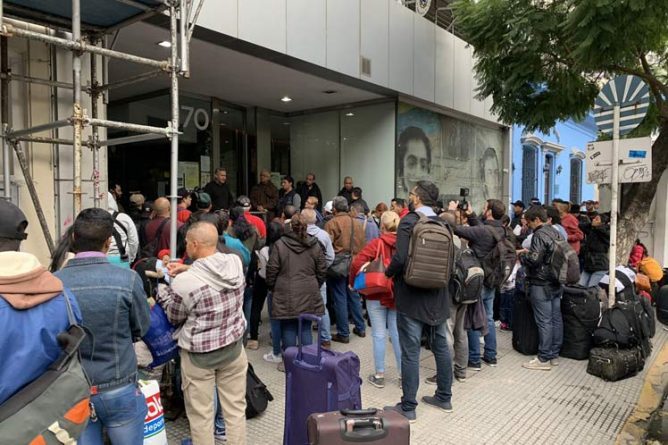 After the Argentinean government denied flight permits Venezuelan Airline (Conviasa) for 90 Venezuelans to be repatriated for free as part of Caracas” official program ”Vuelta a la Patria” (Return to the Homeland), the group managed to return home through Uruguay.

When this group was about to return to Caracas last Friday, Venezuela denounced the Argentinean government failed to approve the necessary permits for the landing and take-off of the humanitarian flight scheduled for that day.

However, the fourth day of the Return to the Homeland plan from Buenos Aires began very early this Monday. Venezuelan Minister for Foreign Affairs, Jorge Arreaza posted in his twitter account the images of the Venezuelans arriving to the Simon Bolivar International airport near Caracas.

“Against all odds! 90 Venezuelans arrived from Argentina thanks to the program “Vuelta a la Patria”, disregarding the INHUMANE attitude of the Argentinian government. We thank the government of Uruguay and all the teams that make it possible. Welcome home compatriots!”, posted the Chancellor.

In a message in Twitter, including a video, the Venezuela’s Embassy to Argentina announced that the 90 Venezuelans are returning to their country from Uruguay. The Venezuelan government managed to transport the group of Venezuelans by sea (Buquebus) and from Montevideo they took the flight to Caracas.

Since the implementation of the repatriation program, it has benefited almost 300 Venezuelans who have returned from Buenos Aires to their home country. And from allover Latin America the number of Venezuelans repatriated for free by the Venezuelan governement exceed 13 thousand.