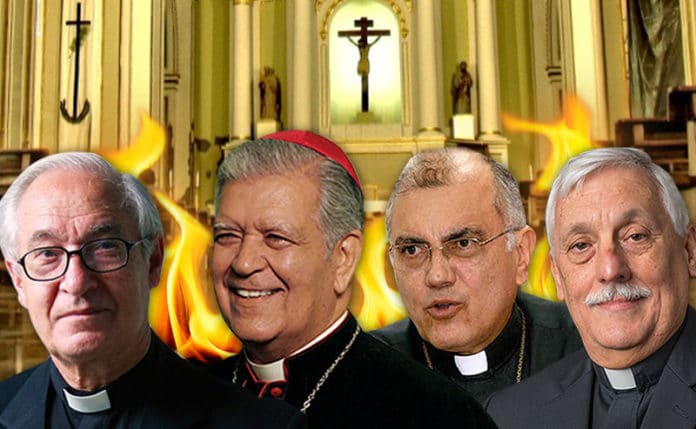 This Sunday the president of Venezuela, Nicolás Maduro, said that he would ask for the support of the Catholic Church so that they will lend part of their churches and convents to serve patients with COVID-19, this in light of the increase in the number of people infected in the country in recent weeks.

“Will some of these prelates who criticize Father Numa lend the facilities of their churches, of their convents, to take people with coronaviruses for their treatment? I hope they lend their facilities to quarantine those coming from abroad, compatriots, to give Christian treatment, solidarity, to give bread to those who need it,” said Maduro.

RELATED CONTENT: President Maduro: US Pursues the Purchase of Covid-19 Medicines that Venezuela Needs
Regarding the proposal, Archbishop Emeritus of Coro, Monsignor Roberto Lückert León, one of the most outspoken anti-Chavistas in the hierarchy of the Catholic Church in Venezuela, flatly expressed his refusal and said that in the first instance those emergency situations with patients should be left to hospital centers and military headquarters, since the church, according to him, should help only when the pandemic “gets more serious and there is nowhere to put them.”

“How can he bring the sick into the churches? In the event that this becomes more serious and there is no place to put them, we will have to offer the churches to put them in, but not right now,” he said in telephone statements to the Digital News portal.

According to Lückert, President Nicolás Maduro used a language and style that he did not like when making the request.

“It seems, because of the style and language, that he wants to do it by force and he is going to get into a serious problem because it will be the Church that will respond to him,” the Archbishop threatened.

“Maduro would have to speak to the Venezuelan Episcopal Conference (CEV) to see what they tell him, because if he is going to force himself into a Church, he is playing with lit candles. Not only with the Church, but with the people, because it is going to disturb all the people,” he stressed.

However, the leader of the Catholic Church stressed that the best way to make aid material is through dialogue.

RELATED CONTENT: Ignominious! Duque Acknowledges He Does Not Respect the Peace Agreements with FARC Because He Didn’t Sign Them

“We shouldn’t have to do that. Maduro and his team must speak with the CEV and even the CEV (headquarters) could be used,” he said.

Lückert insisted that arbitrary action would lead to uproar. “People are not going to allow a sanctuary, like that of the Coromoto Church, because Maduro feels like it, because he is the absolute king. Take it? No. There is a democracy, where common solutions are discussed and reached, but not through bravado. Impossible”.

“The Church is willing to value that and if a temple is to be made available to the people, it will be done with great pleasure, but let it be discussed. But not imposed, because we are supposedly in a democracy and we have the right to dialogue. But because he is the government, is he going to do what he wants? No,” added the right wing cleric, implying that Maduro wants to do it by force, when in reality it was a request for collaboration.

In the interview, the Catholic said — contradicting himself– that most likely, if they collaborate with sick patients, they would facilitate parish halls that are used to hold meetings.

“On the part of the church there is no opposition. The parishes have large parish halls, with bathrooms, and I believe that on the part of the churches there will be no problem in lending them in order to have sick people there. Now that we are in this crisis and I agree that the meeting rooms be given, but not churches. Please! What does he want? Why don’t you go to the Lieutenants’ School or the Officers’ School and turn them into hospitals? The problem is not local, the problem is that they did not deal with health for 20 years and now with the pandemic they were caught naked,” added the priest forgetting about the immeasurable investment in health programs launched by President Chavez and now President Maduro regardless of the criminal US sanctions.

According to the ecclesiastical leader, Maduro’s request is not for humanitarian purposes, but rather demonstrates “the government’s lack of ability to care for the sick” amid a pandemic.