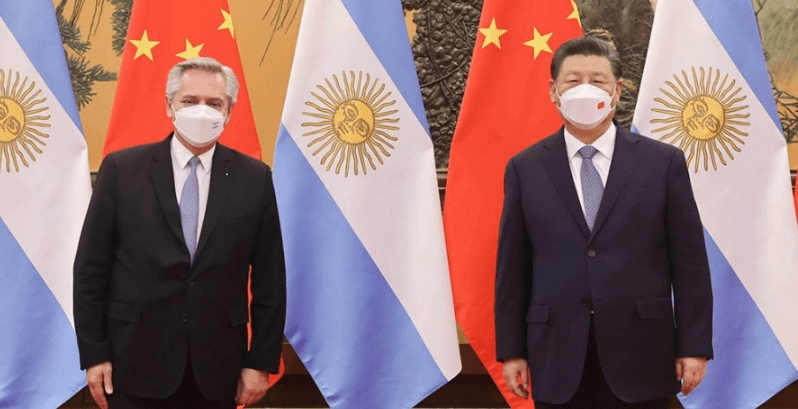 China invited Argentina to attend the 2022 summits of the BRICS economic bloc of Brazil, Russia, India, China, and South Africa. Argentina’s ambassador says it’s a step toward “formal entry” to the grouping, an alternative to the US-dominated financial system.

China has invited Argentina to attend the 2022 summits of the BRICS, a loose economic bloc bringing together Brazil, Russia, India, China, and South Africa.

The BRICS was founded as an alternative to the US-dominated financial architecture, uniting semi-peripheral countries in the imperialist world system, often referred to as “emerging economies.”

The grouping is a model of the principle of South-South cooperation.

Argentina’s ambassador to China, Sabino Vaca Narvaja, said the invitation “is extremely important,” and constitutes a step toward “formal entry” into the BRICS.

BRICS will hold virtual summits for the foreign ministers and presidents of its members on May 20 and June 24, respectively.

This is not the first time Argentina’s incorporation into the BRICS framework has been discussed. In early 2014, India called for Argentina to be added to the alliance, and Russia invited the South American nation to the summit that same year.

If Argentina joins, the grouping may be renamed BRICSA.

Argentina is trapped in $44.5 billion of odious debt from the IMF, and has sought other financial opportunities to ease this crushing burden.

This February, Argentine President Alberto Fernández took a historic trip to China and Russia In his meeting with President Xi, Fernández said he wants his country to join the BRICS.

“I’m certain Argentina has to stop being so dependent on the [International Monetary] Fund and the United States, and has to open up to other places, and that is where it seems to me that Russia has a very important place,” Fernández explained in Moscow.

During his visit to Beijing, Fernández signed an agreement officially incorporating Argentina into China’s global Belt and Road Initiative.

Argentina is trapped in $44 billion of odious debt from the US-controlled IMF.

Seeking alternatives to US hegemony, Argentina's President Alberto Fernández traveled to Russia and China, forming an alliance with the Eurasian powers, joining the Belt & Roadhttps://t.co/rTbO1ZGsPE

While trying to strengthen its relations with China, and to a lesser extent Russia, Argentina has also been careful not to upset the United States.

Fernández did oppose the US-backed far-right coup that overthrew Bolivia’s democratically elected socialist government in 2019, and subsequently provided refuge to toppled President Evo Morales and officials from his Movement Toward Socialism (MAS) Party.

But Fernández’s centrist administration has taken an aggressive approach against other leftist governments in the region.

Although Argentina claims to have a non-interventionist foreign policy, it has joined the US-led campaign to isolate Nicaragua’s socialist Sandinista government.

Fernández’s government likewise joined Washington in voting to expel Russia from the UN Human Rights Council over its war in Ukraine.

Lula returning to power in Brazil could strengthen BRICS
The rise of far-right presidents Jair Bolsonaro in Brazil and Narendra Modi in India, both of whom are very supportive of the United States, has weakened the BRICS framework since it was founded in 2009.

But Brazil’s left-wing former president Lula da Silva, a co-founder of the BRICS, has vowed to strengthen the bloc if he wins the October 2022 elections. Polls show him consistently leading over Bolsonaro.

Lula’s former foreign minister, Celso Amorim, has said that a Brazil under Lula’s leadership would strongly support Argentina joining the BRICS, calling it “very important” for the region.

Argentina has the third-largest economy in Latin America, following Brazil and Mexico.

Mexico has also been considered as a potential member, but was likely excluded because it is already part of the Western-led Organization for Economic Co-operation and Development (OECD).