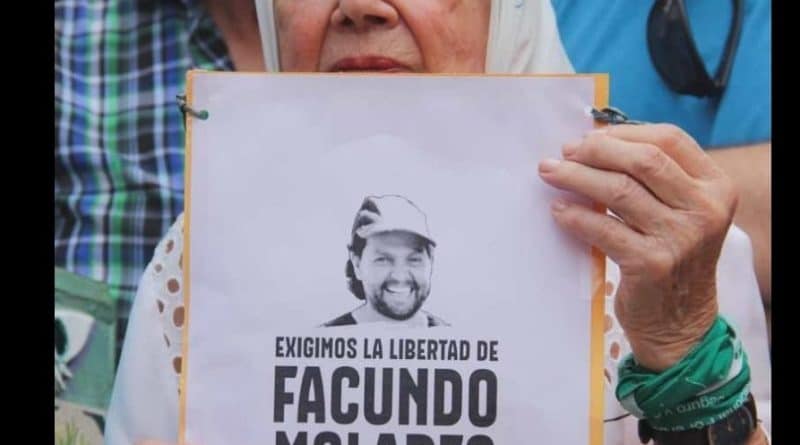 Being a photo-journalist in the “I don´t remember” countries is a high-risk job. The sectors of power, which do not want the images of horror to reach the hearts of the people, have perverse customs, such as aiming with pellets or gas grenades or tear gas, at the eyes of those who rebel or to kill journalists such as Sebastian Moro by the Bolivian dictatorship who since November have held another journalist, Argentine Facundo Molares Schoenfeld.

Twenty-three years ago, on January 25th, the graphic reporter José Luis Cabezas was murdered for exposing corruption in Argentina. Since then, our repeated cry: “Don’t forget Cabezas!” has been a way not only a way of remembering and showing symbolic justice but for learning from history so as to not repeat the cruelty of power and its crimes.

Not forgetting about Cabezas today requires us to denounce that the dictatorship (of Añez-Camacho-Mesa-Gringa Embassy) that has Fucundo imprisoned in harsh conditions of detention, despite his serious state of health.

The report made by the Argentine Delegation in Solidarity with the Bolivian People states: “Facundo Molares Schoenfeld is an Argentine citizen, born in San Miguel (Province of Buenos Aires), 44, who was in Bolivia on a photojournalistic assignment  for the digital magazine ¨Centenario¨ (https://revistacentenario.com) At the end of October he notified his father, Hugo Molares, that he is ill, that he has been feverish for days, that he has  does not  know if he has dengue or malaria and that it needed to be treated.

The father loses communication with Facundo for more than a week, until he receives an anonymous phone call, informing him that his son was ill and that he was going to be transferred to a clinic or to the Japanese Hospital of Santa Cruz de la Sierra.

Facing this situation, Mr. Molares decides to travel urgently to Bolivia, along with his partner, arriving in Santa Cruz de la Sierra on November 12, 2019. He immediately went to the “Japanese Municipal University Hospital” where he finds his son with mechanical respiratory assistance and in a coma. Two days later attending physician Víctor Zambrana, in an interview with Bolivian Notivision revealed that Fucundo “ has acute renal failure, he in septic shock, he has acute pulmonary edema, and the possibility of lead poisoning is real, with all these diagnoses the patient is in a very serious condition”.

When the father left the hospital, to buy some medicine for Facundo, he was arrested by three individuals who threatened him with death if he did not leave the country. In all he only managed to see his son for 15 minutes.

In the presentation of the report of the Argentine Delegation the sisters of Sebastián Moro were present, along with the father of Facundo, relatives of the two Argentine victims of the coup d’état. There, Hugo Molares explained in more detail: “He was hospitalized as someone with no name. When I identified him the police forces discover his identity.

They learned that years ago in Colombia Facundo had written articles about the FARC. As a result, they concocted a big story, blaming him and the mayor of Montero, a deputy, the doctor, the doctor’s mother, others associated with the Movement towards Socialism ( MAS), in a collective cause, without evidence, based on presumptions, accusing them of public incitement to commit crimes, illicit association, and homicide ”.

The homicide for which he is accused refers to the death of two people that occurred in the context of the conflicts that took place in Santa Cruz de la Sierra, between civilians and security forces. There is no evidence to show the participation of Facundo, or of the other defendants in this collective case, in these events.

Dictatorships need to build internal enemies to justify their violence without limits, and use this made up background to create a ghost that would allow discredit the information that Facundo was documenting as a photo-reporter. His camera to them was a dreaded weapon, and the decision was to let him die in a prison hospital in El Alto, where he is isolated to this day.

His father points out, “He spent 18 days in police custody, in a coma, handcuffed to the stretcher and sometimes a handcuff on his ankle. When he recovers from his coma, on the 28th, the prosecution immediately requests a guilty hearing.

The next day, on the 29th, the judge granted the hearing, when he was still under the influence of drugs; he was very bad shape in a wheelchair. Under these circumstances, he is given preventive detention, with the proviso that the judge, listening to the Defense, establishes that he is not to be transferred from the hospital to the Palmasola prison, until he has the medical discharge issued by the hospital authorities.

However On December 2, a police patrol comes with a certificate made by a doctor that we assume is foreign to the hospital, and they take him, practically naked, without shoes, without his medications, to the Palmasola prison.

The Argentine consul found out on TV about his transfer. Days later he goes to see him with a doctor, and he sees that he was still sick, and that a series of treatments and tests had to be done. They schedule everything to do these studies, but before they happen another prison maneuver from the coup government takes place, and they take him to the Chochocoro prison in El Alto, La Paz. He is locked up with high blood pressure, in poor health, and remains without communication. I haven’t talked to him since then. ”

The political nature of the case is very clear. At a press conference the Minister of the dictatorship Arturo Murillo came to declare that Facundo’s case was one of “narcoterrorism”, framed in a “conspiracy against America”, financed by the President of the Bolivarian Republic of Venezuela, Nicolás Maduro, and with local ties with former Vice President Álvaro García Linera. At once all the resentments of the fascist’s government are emptied into a cataract of absurdities.

The report of the Delegation of Solidarity with Bolivia points out: “Currently, the symptoms that accompany his condition are nausea, vomiting, loss of appetite, tiredness, respiratory failure, heart failure, and weakness, sleeping problems, changes in the amount of urine, between other multi-systemic disorders. This had been going on for some time and shows that Facundo lacked a physical level necessary to participate in the acts of violence he is accused of.

Due to the severe renal insufficiency that Facundo Molares suffers, there is a serious risk to his life if it is not treated promptly in a high complexity sanitarium with specialized health professionals. Given the severity of his illness,  the possibility of a kidney transplant is likely to be evaluated. Obviously the conditions in which he is detained are not only incompatible with treatment in this regard, but are incompatible with life itself due to the delicate state of health that we have been explaining.

In summary, there is a current violation of the right to life under the terms of article 4.1 of the Pact of San José de Costa Rica, given that the Bolivian judicial authorities have ordered the imprisonment of a person with a delicate state of health and with a chronic and life threatening disease in a maximum security penitentiary that does not have a high complexity health center to attend to such a disease”.

On December 14 a solidarity committee for Facundo Molares was created in Argentina, which demands immediate repatriation and respect for his human rights. They say in a statement: “The committee welcomes all forms of diplomatic, political and popular struggles that initiates and calls for the repatriation of Facundo Molares.”

Facundo’s freedom requires dismantling the lies raised by the coup, including attempts to wash the face of the coup d’état disguising it as “constitutional succession” or “transitional government.”

His father concludes: “Our whole family is in deep anguish, over his present and immediate future. The news that I get about him are through the consul, who goes to see him at the Chonchocoro prison every ten days.

That is my only link. It really is an unspeakable outrage. What I know is that he remains in delicate health, and now a condition is added in the right eye, and he is practically losing vision of it. I get no public statement from the National Government, the Foreign Ministry, or any expression of concern that there is an Argentine citizen in these conditions. What they claim is that since Argentina does not maintain diplomatic relations with this government in Bolivia, they cannot do anything.

But what I am asking for is not addressed to the Bolivian state that implies recognition, but a public declaration of concern for an Argentine citizen who is politically detained, in the state of Bolivia.

We will continue fighting with all that is necessary. This is a process that began in a dictatorship, with the breakdown of democracy, and it is precisely the seditious and terrorist group that today governs the one that accuses others of sedition and terrorism. They are not entitled to make any accusation. My son is one of hundreds or thousands of people being persecuted in Bolivia. The actions of the authorities are totally illegal, illegitimate. It is very clear that the accusation is political because it is based on taking advantage of the spectacular use of their past, to hide the massacres they are committing.”

Let’s not forget that in Bolivia there is a coup

While Facundo and dozens of Bolivians are living the consequences of the coup d’etat in prisons, in hiding, in exile, the mainstream media turns a blind eye to it, and to them, the issue comes down to calculations and electoral formulas.

If the objective is to “normalize” the country through fraudulent elections, with political repression, militarization of the streets, as was done in Honduras after the coup d’état, or in Paraguay, the task is to erase the traces of the massacres, take them to the territory of oblivion, and sweep the trash under the carpet. The prisoners are prisoners. Therefore, not forgetting Facundo is also about not forgetting that the regime that has him imprisoned is the one that imposed the coup d’état: a racist, colonial, patriarchal, fascist dictatorship, which seeks to kill the messenger.

The operation for his freedom can only be successful if we challenge the oblivion and enter the power games. We can’t confuse electoral tactics with political strategy. And we cannot mix the possible calculations with revolutionary ethics. A fundamental principle of that ethic is to not abandon the comrades who fall in the fight, or who are being detained along the way. Therefore, as long as there are prisoners in Bolivian prisons, the coup continues.

Freedom for Facundo. We want him free, healthy, and back to our land!