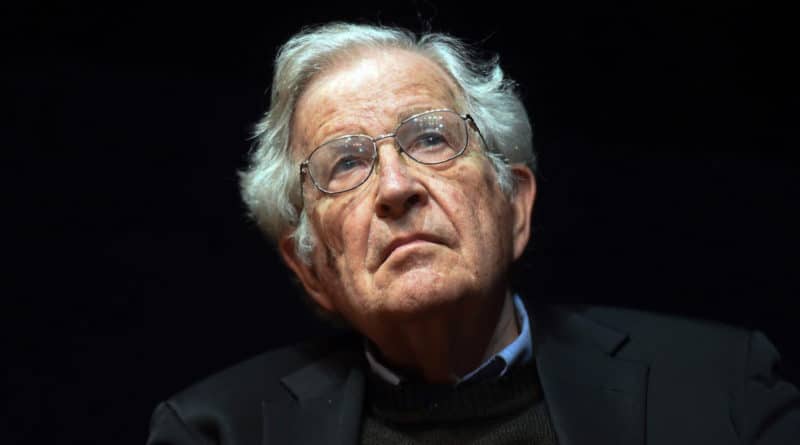 “In my office at M.I.T, when I was there I looked out the window of my office and I saw the David Koch Cancer Center. David Koch is surely a candidate for one of the most extraordinary criminals in human history.” — Noam Chomsky

The Massachusetts Institute of Technology (M.I.T.) is under heavy public scrutiny for associating with and accepting large financial donations from notorious sexual predator Jeffrey Epstein, described by ABC anchor Amy Robach as “the most prolific pedophile this country has ever known.” Yet Noam Chomsky, the institution’s most famous academic, claimed that Epstein was not even the most reprehensible character his former employer took money from. In an interview with the “dunc tank” podcast released this weekend, the professor noted,

In my office at M.I.T, when I was there I looked out the window of my office and I saw the David Koch Cancer Center. David Koch is surely a candidate for one of the most extraordinary criminals in human history. He was personally responsible for shifting the Republican Party from being a minimally sane organization on global warming to being the most dangerous organization in human history, which may destroy us all…, does anybody say anything about that?”

RELATED CONTENT: Attorney General Saab: Hierarchy of the Catholic Church Covered Up Crimes of the Priest Assassinated in Tachira

Chomsky claimed that after Koch died last year, the university produced a laudatory obituary presenting the petrochemical billionaire as a model M.I.T. graduate, even funding the university basketball team. He noted that in 2008 the Republican Party had taken some steps towards trying to deal with climate change, with John McCain running for president promising to take measures to deal with the impending catastrophe. The Koch brothers, whose businesses would be negatively affected by any legislation, “went into high gear,” launching a “juggernaut,” bribing and intimidating senators, developing astroturf organizations, and succeeded in turning the party into a climate change denialist organization, he said. The latest Pew Research Center poll found that only 26 percent of Republican voters believed in man-made global warming.

“The most dangerous organization in human history”
Chomsky was adamant that, in its insistence to increase the use of fossil fuel, the Republican Party constitutes an existential threat to organized human survival. He claimed that the international negotiations on climate change in Paris were scuppered “for one reason: the Republican Party.” According to Chomsky, the U.S. is:

The only major country in the world that is refusing to take any steps to deal with this urgent crisis. The Republican Party is dedicated, openly and publicly, to trying to maximize the threat…, to have the maximum possible use of fossil fuels, to cut back even on domestic regulations that would benefit the population of the United States.”

“The most astonishing document in the entire history of the human species”
“Think what this means for much of the world. There are just no words to capture it.” That was the former M.I.T. professor’s reaction to the Trump Department of Transportation’s 500-page environmental impact study. It concludes that by the end of the century, temperatures will rise by around four degrees centigrade. “Anyone who follows this knows that the scientific community and the World Bank describe such a temperature rise over pre-industrial limits as cataclysmic,” he said. Despite this, the document concludes that there should be no further restrictions placed on automotive emissions. Why? Chomsky describes their reasoning as, “We’re going off the cliff anyway, so why not have a good time while the fun lasts.” The nihilism of the administration shocked even him: “If you can find [another] document like that in history I’d be interested in seeing it.”

It is for this reason primarily that he believes that it is imperative that Trump and the Republicans not maintain office after 2020. “We’re living in a world of raving lunatics with enormous power,” he said, adding that he would take the first person off the street ahead of Trump.

Epstein and Koch’s are far from the only plutocrats to patronize good causes for good publicity. The Sackler family, owners of the company that makes OxyContin, the drug primarily responsible for America’s opioid crisis, have their name plastered onto the wall of many of the world’s finest museums, including the Metropolitan Museum of Art in New York, the British Museum in London, and the Louvre in Paris. Meanwhile, huge petroleum corporations like BP and Shell sponsor environmental seminars the world over, something Chomsky is also critical of.

Described as “arguably the most important intellectual alive” by the New York Times in 1979, Chomsky revolutionized the field of linguistics with his theory of universal grammar. Although currently at the University of Arizona, he is most associated with M.I.T., where he taught from 1955 to 2017. However, it was his vocal opposition to the Vietnam War that shot him to national prominence. Chomsky is a longtime critic of the U.S. government and its foreign policy, penning over 100 books on the subject.

Featured image: Noam Chomsky delivers a speech at the Center for Art and Media in Karlsruhe, Germany in May 2014. Uli Deck | AP