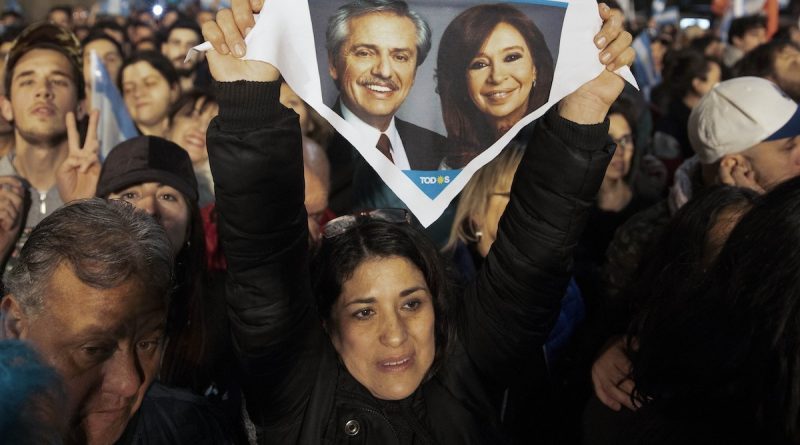 Primary elections are evidently not definitive elections. But with more than a 15% of difference between the opposition (48%) and the Government (33%) is not just a detail or something that can be minimized by the Mauricio Macri Administration. Not even through his paternal advice like the one he expressed at midnight after the official results were released when he told all Argentineans to “go to sleep.”

Without any extenuating circumstance, the opposition Front headed by Alberto Fernandez and Cristina Fernandez de Kirchner crushed those who up to now have exerted authoritarian power of not only condemning Argentineans to return to the worst times of the country’s history but to make the nation a devaluated colony of the Trump imperialism.

There were clear signs that the people, not always willing to quietly be subject to the criminal policies of capitalism, were tired of so much impunity. So this last Sunday, they were bound to find a way to express a strong “enough is enough” and make it a peculiar turning point. And they did indeed. By means of an opposition ticket that for some people meant Cristina Fernandez’s “masterful move” and for other more critics the “less bad” choice to get rid of Macri and his allies, the truth is that this paved the way throughout the country for a resounding win over the government of the rich in October. Not one province was saved from the upheaval created by the Macri Administration as the massive opposition votes expressed even in places where the current government had won overwhelmingly four years ago.

Without a doubt an honorable mention is deserved as the icing on the cake in every good election in Argentina: the province of Buenos Aires. There, Axel Kicillof , the best candidate put forward by the Kirchnerism group, besides the ex-president and now vice-president nominee, crushingly defeated current governor Maria Eugenia Vidal with an 18% vote advantage. A decent showing for a young man who is an ex-minister of Economy and professor of Marxism studies before becoming part of institutional politics. He walked the province house by house, with no airs of triumphalism and was finally showed gratitude for his achievement to the humblest who chose him to get rid of one of the main partners of Macri’s neoliberal policies.

Abiding by these results, if the Macri government were not the mainstay for the bourgeois democracy (they should announce an advanced resignation and stop harming society even more) who voters had made a huge mistake by electing him in 2015 but who today exerted a protest vote in a complete about face. But Macri is not going to leave just like that and the days coming up prior the general election are dangerous, especially regarding economic issues and possible new currency devaluations. Let’s not forget that this pro-Macri establishment is tied to the International Monetary Fund (IMF) and its friends in the international financial banking network. They are capable of everything and, in their conceitedness and contempt against those who have just made a huge statement against him, may appeal to any low blow. In this connection, and as this has been an election useful to determine the course, opponents should get ready to achieve a definitive victory in the first round next October. They are not lacking of votes and there will be more votes for sure, influenced by the triumphant joy from last Sunday. There may be even some indispensable turncoats who will swear that they used to support Macri but they are now “disappointed” and prefer to join the victorious wave.

Let’s do a mass healthy exercise and imagine that the Macri team is expelled from power next October and let’s think about the possibilities of the next Fernandez-Fernandez Administration. The country will doubtlessly continue under capitalism even though the opposition presidential candidate said measures will be adopted to repair the most serious damages caused during the last four years. But the main issue will be his relationship with the IMF and the damned foreign debt caused by the current government. Though Fernandez has repeated that “all payment will be fulfilled” and “Argentina will meet its debt,” it would be convenient to stop putting out that type of promises. If there is anything that should be met it should be regarding those millions of voters who deserve more than just sacrificing their future and funding the debt as will their sons and grandsons. Making promises of commitments to the IMF that are unattainable can only point in one direction; continuing to support poverty for decades.

One may say it’s not the time to pose obstacles in the way but to achieve victory. This is true. But that same type of advice ensured Macri’s governability instead of taking advantage of the anger now expressed in the ballot to remove him from office long ago through people’s struggle in the streets and to prevent more pain to our people. Demonstrations were not missing and the willingness to achieve it either. But leaders preferred to continue playing the game with the limits imposed by these dishonest and exhausting democracies. Therefore, the Government taking office next December has the duty to discuss what to do about the debt with the population, who are in the end suffering its consequences, instead of anticipating and yielding to the winks given by the international financial power. Permanent actions now are essential then to not be victims of new frustrations.

Finally, another no less important aspect is that defeating the reactionary right wing in Argentina is a hard blow for the puppeteers in Washington and Tel Aviv. Trump and Netanyahu were more than comfortable with the coziness that developed between Macri and Brazil’s Jair Bolsonaro, who were obediently adulating them. It all indicates now that the night is coming for that low cost recolonizing idea. The example will for sure be spread. As a matter of fact, the empire could suffer a three-part defeat that same month of October: in Argentina, Bolivia and Uruguay. Except for Evo Morales that is advancing towards socialism in Bolivia, the other two options are the children of a soft capitalism confronted with the U.S. empire’s ambition to align the continent to its idea of attacking Venezuela and Cuba. Unless there is a last moment surprise, October appears in the horizon as an important barrier to the United States’ expansionist trend in the continent. And that is another good reason for the first victory in Argentina’s primary elections to be celebrated throughout the whole Great Homeland. It is time now to go for Bolsonaro and Colombia’s Ivan Duque.