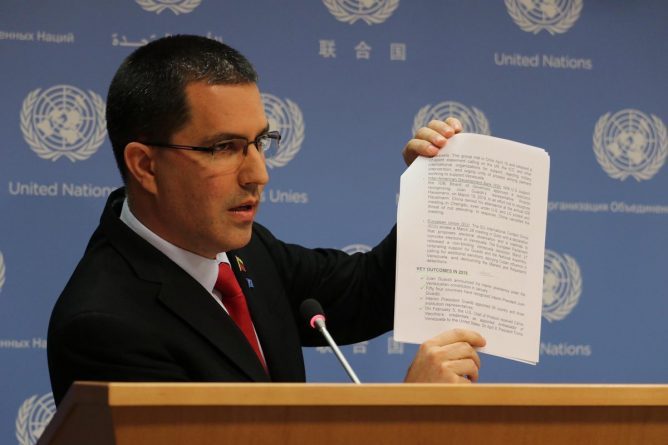 The Venezuelan Foreign Minister offered details about the “devastating effects” of the blockade imposed on Venezuela by the US Government.


By condemning US unilateral and coercive sanctions and its serious consequences for the Venezuelan people, the foreign minister of Venezuela, Jorge Arreaza, affirmed that such pressures are due to the impotence of Washington for not being able to achieve the overthrow of Nicolás Maduro.

“It’s like Mr. Elliott Abrams says, he told me and he said it publicly: ‘Since the coup failed, we are going now for the collapse of your economy, ‘” Arreaza said at a press conference on Thursday in the headquarters of the United Nations in New York.

Specifically, the US evaluates the success of its strategy according to the degree to which the Venezuelan economy collapses, said the diplomat when citing statements by a State Department official in 2018.

In light of these statements, Arreaza stressed that the alleged ‘humanitarian aid’ has been no more than a “show” that seeks to hide the excessive pressure that the US has been exercising for some time.

The Foreign Minister warned that Washington’s latest measures against state oil company Petróleos de Venezuela and Citgo, its US subsidiary, seek to promote  a change in government, regardless of the negative consequences for the population.

Another strategy, as explained by the official, is to try to  “hang”the Central Bank of Venezuela and the mechanisms of economic functioning of the country, partly by creating fears in international private banking to stop working with Venezuela, although the transactions are not directly indicated in the North American measures.

“The international bank trembles when it sees a request from Venezuela, for fear of sanctions,” said Arreaza, and specified that the refusal of the banks does not care in such cases if the request of the South American country is to buy medicines and medical supplies for the population .

The diplomat said that, despite the cooperation provided by China, Russia and the Pan American Health Organization for Venezuela to obtain supplies, treatments and medicines for the population, shipments have not been able to reach their country due to the sanctions imposed by the US, and that inability to import priority goods and products has resulted in thousands of deaths.

In particular, the foreign minister mentioned the latest report prepared by the Center for Economic and Political Research (CEPR), which states that US sanctions have caused 40,000 deaths in Venezuela. He also warned that, according to the report, there could be even more deaths because of the sanctions.

“And what of the life of the people, and the treatments of patients with HIV, and the patients with chemotherapy, and the surgical operations that have to be suspended,” Arreaza launched the question for reflection by the international community, but not before demanding respect for chronic patients, whose payments for medical treatment, in addition, have been blocked by international banks.

Before all this, the Venezuelan Foreign Minister stated that his country will denounce through an international campaign the harmful impact of the sanctions it suffers due to the imposition of the US Government. “It is time to declare ourselves on campaign so that the world knows the devastating effects of the blockade that the US Government has imposed,” said the diplomat.