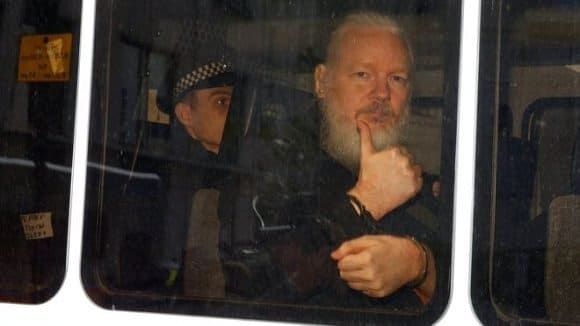 Through its Twitter account, WikiLeaks has denounced the Government of Ecuador which recorded the private conversations of Australian activist and journalist Julian Assange in its Embassy in London during his stay there since 2012.

The materials, obtained illegally, “include meetings with doctors and lawyers.”

Due to this, the Ilocad law firm filed a complaint with the Spanish National Court on behalf of the journalist Julian Assange and the director of WikiLeaks, Kristinn Hrafnsson, informs eldiario.es , who has had access to that document.

Ecuador recorded the private conversations of Assange in the embassy. This included meetings with doctors and lawyers. https://t.co/E3BvsDa9fr

The complaint reveals that both video and audio materials, as well as paper, were used by individuals of Spanish citizenship, employees of the firm Agency6 led by a journalist convicted of fraud, who tried to extort WikiLeaks, threatening to leak everything to the media. In exchange for not revealing the set of materials, these Spaniards asked the organization for a payment of 3 million euros (almost 3.4 million dollars).

Extortion
According to reports, a few months ago, the director of WikiLeaks found a Twitter account that was publicly offering private documents about Assange and contacted the author of that profile. It was a Spanish citizen, resident in Alicante, who identified himself as “Pepe” and who assured Hrafnsson that he had a large audio file, videos and other “sensitive documentation” related to Assange.

At the request of Hrafnsson, he offered several examples that included screenshots of the security cameras from inside the Embassy of Ecuador with the journalist in asylum and the director of WikiLeaks, as well as photos of passports and other documents, including a paper written by Assange’s lawyers and activist audios.

To test the matter, on April 2 Hrafnsson decided to meet with the alleged extortionists in Madrid, where they showed him the voluminous dossier about Assange on a computer. After that meeting the director of WikiLeaks went to the law firm Ilocad to request legal help, where he was advised to report the fact to the section of Kidnapping and Extortion of the Brigade of Crimes against the People of the Spanish Police.

Under the supervision of the police officers a second meeting was held, which was recorded with microphones. In that meeting, Pepe, who this time came accompanied by a partner, stressed that “there are many media interested in the material they have, such as Televisa, the ZDF in Germany or the Sixth in Spain.”

Then, on April 4, the alleged extortionists, through an email, indicated that they are aware of the police investigation and decided to increase the protection of the dossier. However, they subsequently sent another communication in which they cut the cost of the data by half.

According to eldiario.es , in one of the videos recorded by the security cameras of the Embassy of Ecuador, in which Julian Assange appears, the alleged extortionists overlaid the logo of their company: Agencia6. It is a news website that was created in November 2018. Its director is Pepe Martín. In the YouTube channel of Agencia6, the video of Assange in the Embassy was published on April 10, as well as an audio of the journalist. The publication is titled Julian Assange confesses in AUDIO that Ecuador has sold him to the USA for money.

The following day, on April 11, the Government of Ecuador withdrew the diplomatic asylum and expelled from its Embassy in London the founder of WikiLeaks, Julian Assange, who had remained in the diplomatic headquarters since June 2012. Once expelled, Assange was arrested by the British Police and remains in the prison of Belmarsh, in the southeast of the capital of the United Kingdom.

Belmarsh, known as “the Guantanamo of Great Britain”, is one of the three high security establishments in the United Kingdom, with a capacity for a little over 900 prisoners.