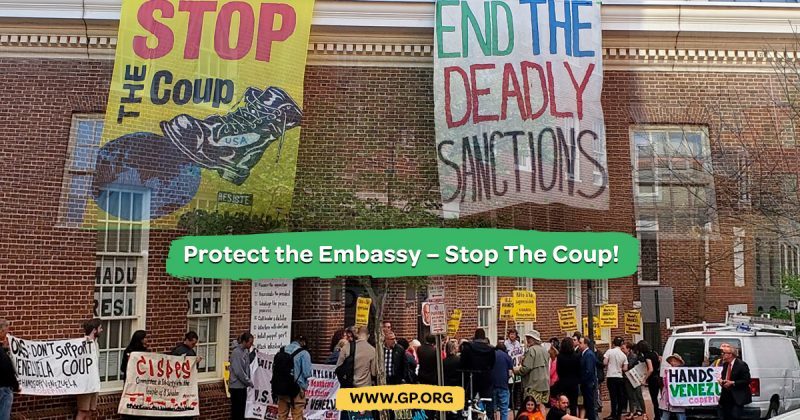 In two messages to the State Department today, the Collective explained that we are not violating the law and if there are unlawful arrests we will pursue legal action to hold people responsible for ordering arrests or making arrests.

We made this clear in writing to the State Department even before April 24, but we reiterated this today after the Secret Service came to the embassy and photographed the outside building to prepare plans to illegally enter the building and make unlawful arrests.

Tonight, when the Collective held an amazing forum with John Kiriakou, a former CIA official who spoke about an “Insiders View of US Regime Change,” outside there were Secret Service and DC police. This act of intimidation included not only the threat of arrest but also intimidated journalists, some of whom were asked for photo identification and press information.

During this forum, both Mara Verheyden-Hilliard, our lawyer from the Partnership for Civil Justice, and I publicly made the points below so there was a video record of our concerns with the threats from the State Department police and the illegality of any arrests of Collective members.

We were not intimidated because members of the Collective are not breaking ANY laws.

In my second message to the State Department, I wrote in the Subject Line: “Any arrest in the Venezuelan embassy would be unlawful” and wrote:

Members of the Embassy Protection Collective are writing to make it expressly clear and ensure all personnel are put on notice that any arrest of persons inside the embassy would constitute an unlawful arrest. We understand from our communications with your office that you are threatening to arrest persons inside the Venezuelan embassy.

Not only are we here at the invitation of persons lawfully in charge of the premises, but we are also here as people with lawful rights under Washington, DC tenancy law.

It is our intention to hold responsible any person who orders or effectuates any unlawful actions against us.

We have received no eviction notice and due process opportunity to challenge any attempted eviction as is required by law.

An earlier message to the State Department focused on three issues:

(1) The US will be violating international law if they enter the embassy and do not protect it from takeover by the fraudulent puppet government the US is trying to install despite the democratically elected legitimate government of President Maduro.

(2) President Maduro was elected in an election where more than 150 international election observers unanimously agreed that the election was legitimate by international standards.

I am with the Embassy Protection Collective. We are inside the embassy with the permission of the Venezuela government. We have not entered unlawfully nor are we trespassing.

We saw the Secret Service outside today taking pictures and I spoke with the officers who told us to stay in touch with David Noordeloos who told me to contact you.

I am writing to find out about your plans. I will serve as the police liaison between the Collective and law enforcement if you decide to approach the embassy to remove us.

I shared with Noordeloos the information below that indicates that entering the embassy would be a violation of international law, Juan Guaido is not the interim-president and has violated Venezuela law and has no governmental authority. Further, Nicolas Maduro is the legitimately elected president of Venezuela and is recognized by the United Nations and the vast majority of world governments. I hope the US government will respect international law, Venezuelan law and the sovereignty of Venezuela.

Please let decision-makers know that there is a legitimate government of Venezuela that has been democratically elected. The Maduro government is recognized by the United Nations. We are in the embassy with the permission of that government. Any trespass by US authorities or the illegal fake government or opposition would violate the law.

The entire world knows that recognizing Juan Guaido is a farce. He does not have the power of the Venezuelan government, cannot issue passports or visas, negotiate any agreements and literally does not function as a government.

The information below clarifies that invading the embassy, the equivalent of invading Venezuelan territory, would be a violation of law.

According to Article 22 of the 1961 Vienna Conventions on Diplomatic Relations, foreign embassies should be protected by the United States government and their space should not be violated by the US government. Specifically, international law requires:

3. The premises of the mission, their furnishings and other property thereon and the means of transport of the mission shall be immune from search, requisition, attachment or execution.

The Elected Government of President Maduro Remains In Power

The government of President Nicolás Maduro was re-elected on May 20, 2018 in response to the opposition demanding an early election. The election was held consistent with the Venezuelan Constitution, in consultation with opposition parties and as determined by the National Electoral Council, an independent branch of the Venezuelan government.

The electoral process was observed by more than 150 election observers. This included 14 electoral commissions from eight countries among them the Council of Electoral Experts of Latin America; two technical electoral missions; and 18 journalists from different parts of the world, among others. According to international observers, “the elections were very transparent and complied with international parameters and national legislation.”

In a letter to the European Union correcting some of the false statements made about the election, election observers wrote: “We were unanimous in concluding that the elections were conducted fairly, that the election conditions were not biased, that genuine irregularities were exceptionally few and of a very minor nature.”

Voting machines were audited before and immediately after the election. Venezuela does something no other country in the world does, a public Citizen’s Audit of a random sample of 52 to 54% of voting machines at each precinct. The Citizen’s Audit is observed by the media, the public, and all opposition parties, who sign the audits. The audits showed that the election results accurately reflected the will of the voters.

The opposition relies on Article 233 of the Constitution, which allows the National Assembly president to serve as interim president only if the president-elect has not yet been inaugurated. Guaidó’s self-appointment occurred after President Maduro had been inaugurated.

“become[s] permanently unavailable to serve by reason of any of the following events: death; resignation; removal from office by decision of the Supreme Tribunal of Justice [equivalent of impeachment]; permanent physical or mental disability certified by a medical board designated by the Supreme Tribunal of Justice with the approval of the National Assembly; abandonment of his position, duly declared by the National Assembly; and recall by popular vote.”

None of these conditions were met.

If Guaidó had met the above conditions, Article 233 allows him to serve for only 30 consecutive days pending election and inauguration of the new President. Guaidó’s self-appointment and fraudulent inauguration occurred more than 30 days ago and no election has been scheduled.

In a press briefing, Elliot Abrams, the US Special Representative for Venezuela, could not explain these violations of law by Guaidó and admitted that Guaidó is not “able to exercise the powers of the office because Maduro still is there.” Even Abrams admits that Guaidó is not the president. Therefore, he has no authority over the Venezuelan embassy.

If the US proceeds to violate the property of the Venezuelan Embassy, it will send a message to all the countries in the world that their embassies are not protected by international law in the United States. The US wants to install a coup puppet government and is willing to violate the law to do so. That is a message the United States should not send to governments around the world.

We are making this correspondence public so that there is an open record that the State Department has been put on notice and that their threats to unlawfully arrest and evict members of the Collective from a building, where we are tenants or guests with the permission of the Venezuelan government, are public. We are prepared for the Secret Service and DC police to come to the embassy tomorrow and are not intimidated by their threats. We know that we are not violating any laws.