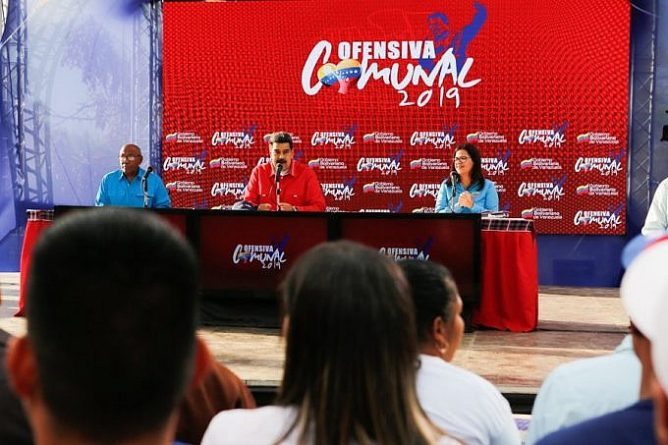 The head of state stressed that the 2019 Communal Offensive Plan, must respond to the 2019-2025 Plan of the Nation, according to the reality and priority of the historical moment that the country is living.

For this reason, he explained that the Plan consists of 5 main elements:

He also stressed that he would place all the resources to boost the productive economy directly in the popular sectors through the organization of the Communal Councils. “We must return to the idea of ​​the communal banks as an axis of financing to the productive processes. It is a great opportunity,” he said.

For the effective execution of the Plan, 16 thousand 557 million bolivares are approved, to be distributed in an equitable manner, with the vigilant supervision of People’s Power throughout the country.

He also called for the incorporation of several missions to develop the Plan. “I want this Plan to incorporate the Chamba Juvenil Mission, the Somos Venezuela Movement and the 2 million 200 thousand militiamen and militiawomen, the productive economy of the community”, he added.

He announced financing and delivery of land to boost production in the country. “200 thousand financing (opportunities) and 250 thousand hectares will be delivered to the Communal Power to boost national production. “It is impressive the productive force that is entering into the national spirit,” he said.

Finally, he announced the creation of the Bolivarian University of the Communes within the framework of the Alma Mater Mission “A new university of Venezuela Power,” he said.

Incorporation of militiamen to defend the Homeland

The President invited the women and men of the Fatherland of Bolívar willing to defend the country to join the Bolivarian National Militia, to reach a strength of 3 million militiamen. “Anyone who wants to serve his country, be useful and take up arms to defend the Republic, I invite you to register,” he said meeting with the People’s Power.

He invited the People’s Power to present the results of the debate on May 15 with concrete proposals for its implementation. “I will be waiting for you on May 15th with the Communal Offensive Plan 2019 and the concrete proposals to set us up and have an offensive in the economic, cultural, social, political, territorial, military,” he said.