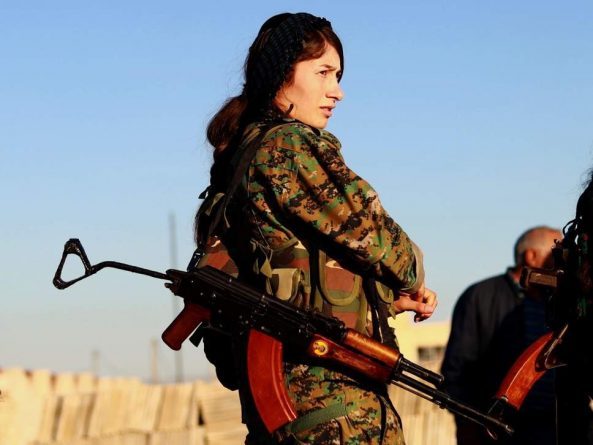 Kurdish forces are on the brink of capturing the last town under Isis control in Syria – but before that battle is over they might have to face a Turkish invasion.

The town of Hajin, on the banks of the Euphrates river in eastern Syria, is Isis’s last holdout in the country. After three months of intense fighting, the Kurdish-led Syrian Democratic Forces (SDF) announced on Friday that it had taken most of the town.

The capture of Hajin would represent a milestone for the SDF, which for the last four years has been the west’s main ally in the fight against Isis in Syria. With the backing of the US and UK, it has forced Isis from swathes of the country’s north and east to this small pocket in Deir Ezzor.

That alliance could soon be put to the test, however, as Turkey’s president Recep Tayyip Erdogan vowed this week to launch a military operation against those same fighters. The move has placed Washington in the middle of two allies – one a Nato member and regional heavyweight, and the other a key partner in the fight against Isis. Shrinking territory of Isis forces leaders into the crosshairs

Ankara has long complained about US support for the YPG, a Kurdish militia that makes up the vast majority of the Syrian Democratic Forces. Turkey considers the group a terror organisation, and has watched as it has grown in strength since the onset of the Syrian civil war. It fears a powerful Kurdish group on its border will threaten its efforts to contain Kurdish nationalism within Turkey.

Mr Erdogan said on Wednesday that Turkey would launch an operation against the YPG “in a few days”. He added that it was “time to realise our decision to wipe out terror groups east of the Euphrates.”

Mr Erdogan has made similar threats before, but it will not be the first time Turkey has crossed the border to fight the YPG. In March, the Turkish army and allied Syrian rebel groups took control of the majority Kurdish province of Afrin, which had been controlled by the group.

A spokesperson for a Turkish-backed Syrian rebel group said on Thursday that 15,000 fighters are preparing to join the latest operation. Turkish state media has been dominated by reports of the impending offensive.

The US has some 2,000 of its own troops stationed in the Kurdish areas of northern Syria in support of the SDF, and the Turkish threats prompted a forceful response from the Pentagon on Wednesday.

Commander Sean Robertson, a Pentagon spokesperson, said an operation to cross the border would be “unacceptable”.

“Unilateral military action into northeast Syria by any party, particularly as US personnel may be present or in the vicinity, is of grave concern,” he said.

Both the US and the SDF have warned that an attack against Kurdish areas of northern Syria will allow Isis a chance to regroup. And although the extremist organisation may be close to losing the last of its territory, it is already transforming back into an insurgency that will require Kurdish forces to counter it.

A statement released by Syria’s main Kurdish parties on Friday called Turkey’s threats a “declaration of war”, adding that “all the forces in north and east Syria … are asked to agree on strategies to confront this aggression”.

In November, the SDF temporarily suspended its offensive against Isis in Hajin after Turkey fired shells across the border. Its top commander has threatened to do the same again if Turkey attacks.

“If there is a Turkish attack, the YPG forces will be forced to come protect the borders, to defend their families,” General Mazloum Kobani said on Thursday. He added that “the battle against Daesh is not possible” without them.

Following the shelling last month, the US set up observation posts along the border where Turkish and YPG positions face off in an effort to reduce tensions.

While diplomatic efforts were underway to prevent an outbreak of fighting on the Turkey-Syria border, the SDF said it had captured most of Hajin on Friday, and would finish off the last holdouts in the town within days.

Beyond Hajin lies a string of smaller villages on the eastern banks of the Euphrates. The SDF estimates that some 5,000 Isis fighters remain in that last pocket, which it will capture in the “coming weeks”, according to SDF commander Lilwa al-Abdullah.

The operation has been one of the toughest battles faced by the SDF. Whereas in previous battles Isis has made deals to retreat to other areas, there is nowhere else to escape to from Hajin. And because it is its last holdout, the battle is being led by its most experienced fighters.

As a result, there have been significant casualties on both sides. The UK-based Syrian Observatory for Human Rights said that some 793 Isis fighters have been killed since the beginning of the operation to take Hajin in mid-September, while 464 SDF fighters have died.

There have been significant civilian casualties too. Much like in previous battles to recapture towns in which Isis is entrenched, the coalition has relied heavily on its superior air power.

In October, the UN said that “scores of civilians have reportedly been killed and injured due to airstrikes or having been caught in the crossfire” around Hajin.