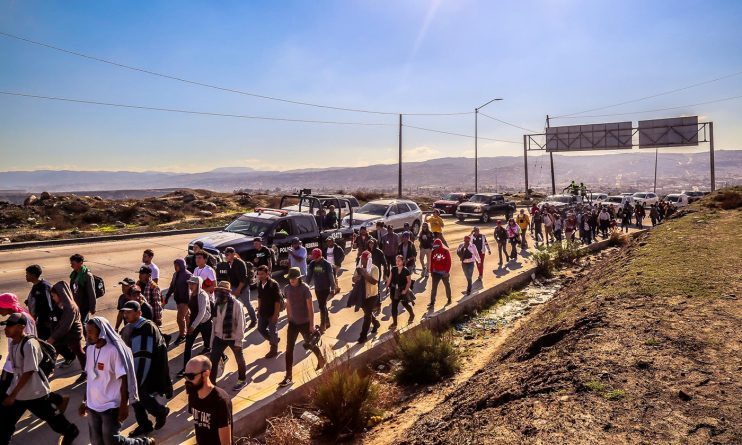 Members of the Central American exodus march to the U.S. Consulate in Tijuana, Mexico, on December 11, 2018, to petition the U.S. government to respect their right to seek asylum. Refugees from Honduras, participating in the march, make up a significant portion of the caravan.

A singular image is said to have sparked this latest migrant caravan. Set against a bold, red background, it features a figure, arms outstretched like a cross, with a backpack flying the Honduran flag. Contained in the message across the top: “We aren’t leaving because we want to; violence and poverty expel us.”

The image expresses the generalized frustration regarding the current social, political, and economic state of Honduras and proposes migration as a challenge to that reality. The typical Honduran sees the caravan movement for what is: an outright act of civil disobedience. People are walking out of their own countries, the subconscious protest of a frustrated people. It is a bold protest by Hondurans against their president and corruption within their government and a challenge to the U.S. to reckon with the regional crisis its foreign policies have created.

I remember an article from a 1980s Mexican magazine promoting migration to the U.S. as a means of calming popular discontent around a range of social injustices. Instead of using organized protest to demand change, people could be encouraged to seek the American Dream, quelling the problem of popular uprisings at the root.

In the 1980s, revolution was a tangible goal throughout Central America and the Caribbean. Cuba gave the region its first successful popular revolution in 1959. Nicaragua led the way on the mainland with their victory 20 years later. Before the American Dream, the image of change was well-rooted in the anti-capitalist struggle.

But now, it seems as if this psychological shift from revolution to migration has circled back, and migration has become the newest form of protest.

“Oppressed people cannot remain oppressed forever,” Martin Luther King Jr. wrote in his letter from the Birmingham Jail. “The yearning for freedom eventually manifests itself … . Something within has reminded him of his birthright of freedom, and something without has reminded him that it can be gained. Consciously or unconsciously, he has been caught up by the Zeitgeist … .”

The dangers of migrating, the possibility of being deported, and the increasingly strict immigration system in the U.S. are well-known. Yet since May, roughly 10,000 people have walked out of the country en masse.

The caravans emerged only after months of bloody protest to the 2017 elections in Honduras, both as a last recourse and as a continuation of the decadeslong human-rights movement. Instead of trying to cross without calling attention as waves of past migrants have done, they left Honduras openly, proudly self-organized, with signs and songs, their flags raised.

Though King’s letter from the Birmingham jail was written in reference to the Black freedom movement of the 1960s, his letter is helpful in understanding the caravan movement. “Nonviolent direct action,” he wrote, “seeks … to foster such a tension … to create a situation so crisis-packed that it will inevitably open the door to negotiation.”

Now massing at the southern U.S. border, where conditions continue to deteriorate, the migrants and refugees aren’t escaping only violence and poverty. Most come from the regions bordering Nicaragua, El Salvador, and Guatemala as well as from more central agricultural areas of the country where a decadelong drought is provoking severe economic stress.

In this country of just over 9 million, family and friends of those who joined the caravan are all too familiar with the narrative. And much of the internal response to their walkout appears to fall along class and party lines.

Hondurans living in poverty, as nearly 70 percent of people here do, tend to sympathize, urging them on like they might a national soccer team. Those living more comfortably, however, are more skeptical of the movement, more likely to believe those migrating are taking advantage of asylum laws.

Despite the varying opinions, however, nearly everyone knows someone who has left and follows the progress on the news and in social media.

Many see it as political.

From the beginning, Honduras’ new president, Juan Orlando Hernández, denounced the political nature of the caravans, adding that Hondurans were being manipulated into migrating to discredit his presidency. He singled out ex-president Manuel Zelaya, as well as center-left Libre and the Liberal Party as instigating the caravans—though he has no evidence to support the claim.

Hondurans who support the more conservative Nationalist Party echo Hernandez’s stance while those in the Liberal Party blame the Nationalists.

Recently formed parties such as the Liberty and Refoundation party, or Libre, and the Anti-Corruption Party, or PAC, point to the historical corruption of both the Liberals and the Nationalists as the root cause of the caravans and express solidarity with those walking out.

Some of the roots to this political unrest date back to 2009, which marked the beginning of a staggering uptick in both poverty and corruption, provoked by the coup that ousted Zelaya from the presidency. Since then, Honduras has remained the poorest country in Latin America and has earned the notorious distinction of being home to the most dangerous city in the region, five times in the last eight years.

In the years since the coup, Honduras is also reported to be the deadliest country per capita for environmental activists and lawyers.

The 2017 elections brought exuberance and hope. People for the first time in years felt the power of their vote and were determined to shift the future of their country toward a less corrupt government.

But just a year before the presidential elections, then-President Hernandez’s handpicked supreme court ruled in favor of presidential re-elections, despite being against the constitution—thereby legally securing the continuation of his presidency.

On election night, PAC candidate Salvador Nasralla was winning, and the people were beginning to have hope. Then the power went out, and when it came back, Hernandez and the Nationalist Party suddenly were ahead.

Despite evidence of fraud, tampering and violent coercion, the electoral tribunal declared Hernandez the winner. His re-election provoked spontaneous demonstrations across the country, which were suppressed with physical violence, live bullets, and tear gas by the army and police.

More than 30 people were killed and over 1,600 were injured. Even the police, who by law cannot vote, momentarily joined in the protests against Hernandez’s re-election.

At times it seemed as if the widespread human rights abuses would be recognized by the international community and a new vote would be organized. Other times, the reality of corruption sank in, and we knew the fraud would be upheld.

The U.S. recognized Hernandez’s win in late December, a month after the elections and after a majority of the repression had taken place. The international community’s early critiques of the elections quieted after the U.S. response—a replay of the events after the 2009 coup that lead Hernandez’s party to power. Mexican Federal Police in riot gear outside the U.S. Consulate in Tijuana, Mexico, await the arrival of the peaceful marchers from the Central American exodus. Photo by Rob Wilson.

This was especially disheartening to Hondurans because it highlights how interests continue to outweigh justice, even among institutions that purport to uphold human rights.

Recent history has shown Hondurans that democracy is not respected in their country. Presidents are imposed, peaceful protest is violently stifled, and extreme corruption has seeped into daily life.

The saying “la gente puede vivir sin justicia pero no sin esperanza”—people can live without justice, but not without hope—sums up the current mood of the country.

What the caravans have done is highlight to the world the extreme injustices lived by Central Americans in general and Hondurans in particular.

President Hernandez’s brother, Tony Hernandez, was recently detained by U.S. authorities for drug trafficking, his arrest coming at a time when the caravan movement is demonstrating to the world the state of the country they left behind. For those migrating, it’s a confirmation, proof, that, “Yes, it really is this bad.”

The charges have ushered in a sense among some Hondurans that the president soon, too, will have to respond to similar allegations. And instead of the migrants being forced to justify their exit, those in power will be forced to account for the injustices.