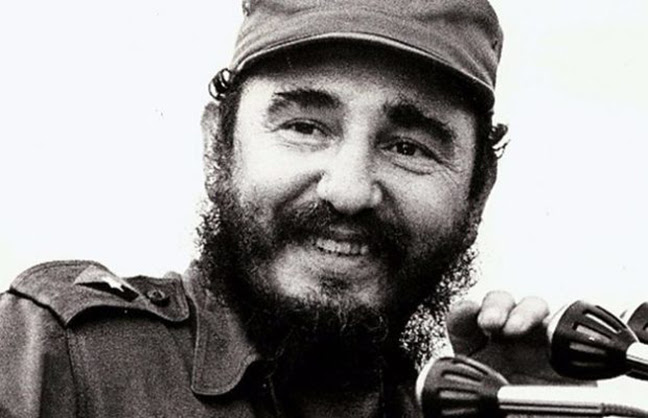 Going back to Fidel Castro’s passion of transforming politics into something feasible regardless of having to face a thousand adversities on the way.

Back to his boldness when up against enemies a thousand times more powerful than him and not giving up in his attempt.

Back to his determination to continue advancing in the hardest of circumstances, as it was after the assault on the Moncada Barracks or the complicated landing of the Granma yacht.

Back to his intelligence when defending the ideas that inspired him to enter into the difficult task of defeating tyrant Fulgencio Batista and to defend himself during his Moncada trial, claiming that Jose Marti was the one to be blamed for this assault.

Back to his harshness without abandoning his fondness, evidenced in every combat, every decisive moment in which the slightest doubt would have cost his own and his comrades’ lives.

Back to his lessons about the necessary combination between mass struggle and armed struggle to achieve conclusive victories as the one reached by Cuba during these sixty years of existence. Sound victories that are not taken out with coups or conspiracies, as the U.S. imperialism has always desired.

Back to his military strategist’s sagacity that allowed him to overcome, as in the Sierra Maestra as in hard years in government; moments that foretold of impending defeats but were instead turned into victories thanks to his coherence and fighting spirit.

Back to that of the foresight, together with his brother in arms Ernesto Che Guevara, that as soon as the dictator was defeated—the significance and necessity of building a tool to fight the disinformation and misrepresentation of their ideals and transformations. The two of them, together with another warrior in Jorge Ricardo Masetti, were the masterminds of Prensa Latina news agency, which continues triggering accurate information to this day.

Back to giving the constant example so that the entirety Cuba could understand that weapons ready for combat are as important as voluntary work, in order to boost production and generate a self-sufficient economy.

Back to his endless patience to teach, train and foster knowledge among those who had always been marginalized, excluded, humiliated. Literacy as a starting point and then, throughout the entire Revolution, training and studying were among his greatest concerns in order to achieve an educated nation willing to continue growing in this sense.

Back to his huge humanity, devising tools to ensure public health for all men and women in Cuba but then doubling the bet by creating an army of white coats bringing solidarity to faraway places around the world.

Back to his brightness when determining that U.S. imperialism was the enemy to be fought and to not leave a day without denouncing it as the opposite to a society in which life is always defeating death.

Back to his brightness when realizing that Cuba’s women were as valuable as its men, helping from the beginning to create the female guerrilla group Mariana Grajales and then, when building the revolutionary government, “collaborating as necessary to create, together with Vilma Espin, the Federation of Cuban Women, an essential agency for training and struggle of the spirit.

Back to his understanding of socialism and communism, in which society becomes a world of equals without a chance for variants of capitalism, neither shortcuts aimed at deceiving the peoples, including reformism or social democracy.

Back to his understanding of internationalism, in which the struggle of any nation in the world facing imperialism is the same as Cuba’s struggle, something clearly evidenced during these sixty years.

Back to Fidel, the hero of a thousand battles but also the thoughtful statesman a step ahead of the future, predicting that this Humanity shall be saved among all of us or it will perish.

Back to Fidel, who contrary to other fake leaders made humbleness his lifestyle, avoiding unnecessary self-worship and elitist behaviors. He was always ready with his people for whatever would come, always ready to lead them to victories in the hardest battles.

Now, three years after he passed away, his revolutionary legacy continues enlightening this tough moment for the American continent and the world. But these new insurgencies awaking among our people evidence that he was not wrong when predicting that beyond its brutality and uncontrolled ambition, U.S. imperialism is going to collapse this century.

Going back to Fidel is to continue imagining a socialist Revolution as the one he built to prove that the path is already marked. The only thing we have to do, as Uruguayan folk singer Daniel Viglietti would sing, is start walking.