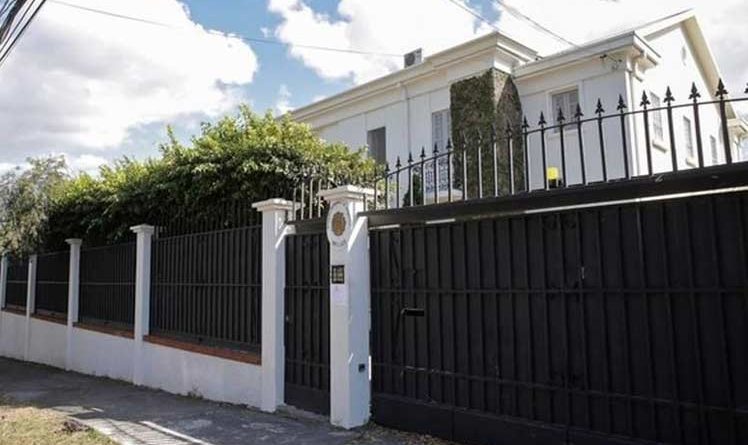 San Jose, Feb 22 (Prensa Latina).- The Costa Rican government’s decision to recognize the Self-Proclaimed Guaidó and his “representative”, Maria Faría, caused her to feel above the law and thus assaulted the Venezuelan embassy. Today, analysts and media agree.

For the political analyst Óscar Barrantes “this fact (the assault of the Venezuelan embassy) demonstrates the violent, coup, aggressive, warmongering, mercenary and terrorist nature of the counterrevolutionary opposition in Venezuela.”

A very dangerous event, since it weakens international law and the validity of multilateral conventions, says Barrantes and states that “with this outrage, the minions of the abject Juan Guaidó have lacerated the principles of the Charter of the United Nations.”

For Barrantes, these Venezuelans have muddied a tradition of friendship, balance, confidence, respect and sovereign equality in the diplomatic ties between the two countries and assures that “the Costa Rican government is playing with fire by getting entangled in the interventionist maneuvers of the US, and the attempt to overthrow the constitutional government of Nicolás Maduro.”

For its part, the newspaper Libertad, an organ of the Popular Vanguardia Party (PVP, communist), maintains that “the farce mounted by the US embassy went wrong, her act fell into disgrace and she had to leave the diplomatic headquarters by force, committing a crime that should be punished with jail.”

In this situation, highlights Libertad, the strong political blow to the Self-proclaimed is as forceful as was the fact that the “Tico” government violated all national and international principles and laws by recognizing a self-proclaimed rather than a democratically elected president elected by the people, as is the case of Nicolás Maduro.

The Ticos communists believe that the Government acted halfway in this case, since it had to arrest and prosecute the terrorist act of forcibly taking a diplomatic mission, because it creates a disastrous precedent that ridicules Costa Rica.

Libertad reproduces the statements of President Carlos Alvarado, when this Thursday in the weekly contact with the press said, “This was why our reaction was, because there are rules in Costa Rica, and the rules must be respected”.

But, the news outlet charges that the president of Costa Rica does not respect the norms of international diplomacy, nor the Political Constitution of the country, nor the Charter of the United Nations.

Therefore, the press organ of the Ticos communists estimates that in this case the government receives what it sows: “raise ravens and they will take your eyes”.

Regarding Maria Faría’s apology requested by the Tico government and the order to leave the usurped diplomatic headquarters, Libertad maintains that “head down and showing the moral defeat characteristic of a traitor to her country, this is how Faría came out of the Tica Chancellery, this Venezuelan will remain forever in the history of Costa Rica as a nefarious character who does not deserve the nationality granted in our country and whose family has a very questioned background in her country “and it seems that here, too”. That background in Costa Rica begins to see the light, because the Extra newspaper publishes today that María Faría’s husband is Carlos García Ibánez, Venezuelan businessman based in Costa Rica, owner of the CB24 television station, who faces labor demands for more than 50 million colones, about 84 thousand dollars.

Extra recalls that García Ibáñez is the son of Blanca Ibáñez, widow of former Venezuelan President Jaime Lusinchi, based in Costa Rica.

‘Before the media deployment after the assaulting by force of the diplomatic mission by Faría and her people, those affected by García Ibáñez did not remain silent and accused the Venezuelan businessman because he does not pay and would be covered by the diplomatic immunity of his wife ‘, says the Tico newspaper.

For Extra “at this moment questions arise as does the Costa Rican government do well to protect a family that robs Costa Ricans, why in three years he has not paid his employees and, why did he not fulfill the arrangement with the Ministry of Labor?”

All this shows that the assault of the Venezuelan embassy receives the almost unanimous condemnation of Costa Rican society, while parties of the left, social movements, solidarity groups, media and analysts criticize the timidity with which the Government acted in the face of such flagrant violation of Ethical legislation and international law.