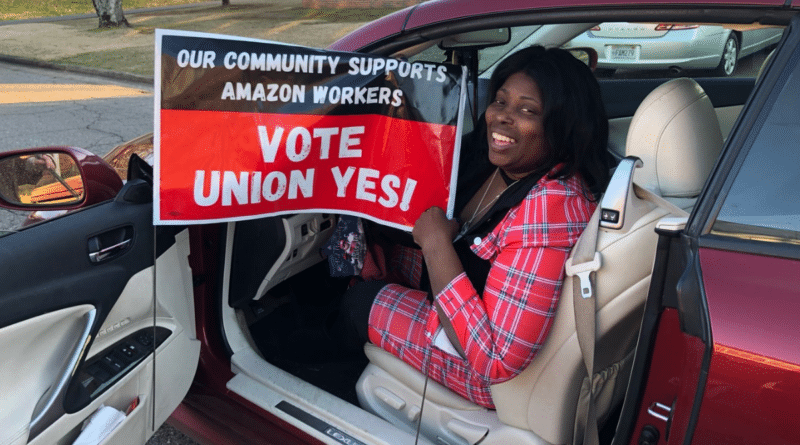 Yesterday, news broke regarding the loss of the union vote at the BHM1 Amazon fulfillment center in Bessemer, Alabama. Despite the loss, the workers have vowed to continue the movement — starting with filing objections and Unfair Labor Practices complaints against Amazon’s illegal meddling in what should have been a fair voting process. There are many possible outcomes, including the potential for a re-election because of Amazon’s blatant violations. The objection process could begin as early as next week.

The Party for Socialism and Liberation extends full solidarity to the workers who have fought a hard fight and taken an important first step in this historic struggle of majority Black workers in the Deep South. They are fighting against one of the richest and most vicious employers in the world — in a very anti-union state.

We recognize that the working-class movement will be met with twists and turns, victories and losses — all of which must be studied to draw out the key lessons. But one thing is certain: The struggle must go on.

Now our class must press on with the addition of more tactical experience in our toolbox against a billion-dollar corporation that condemns its employees to poverty and misery. It will take months to fully analyze and understand everything behind the vote. However, at this stage, some things are certain and should be emphasized.

First, by no means does the vote represent a complete failure of the workers and their union drive. Regardless of the outcome, the campaign forced the issue of dignity and respect for warehouse workers into the mainstream unlike ever before. Furthermore, this fight was led by Black workers who drew inspiration from the Black Lives Matter movement and last summer’s rebellion against police brutality. They have demonstrated that the fight for civil rights is a labor struggle and vice versa.

The Bessemer struggle further exposed Amazon’s union-busting tactics and the general playbook used by employers to prevent workers from exercising their basic democratic right to get organized for power on the job. It has aroused a deep sense of solidarity and class-conscious support from the local Bessemer community.

These workers challenged Goliath, and in doing so, drew national media coverage and attention — as well as solidarity from workers around the world who eagerly awaited the results. Despite the loss, as one of the most prominent labor struggles in the United States in recent memory, the Bessemer union struggle has undoubtedly shaped the consciousness of thousands more workers who are inspired to get organized, fight for justice, and have a voice on the job through unionization. In fact, since the campaign went public, the RWDSU union, which led the Bessemer organizing drive, has received over 1,000 inquiries from Amazon workers across the country who are interested in unionizing their workplaces.

Amazon has gigantic sums of money at its disposal to hire anti-union consultants, sway politicians and administrators, and build a mass union-busting campaign — and that is exactly what it did. We cannot underestimate the power that a company’s union-busting drive can have on workers — especially workers who have never gone though an organizing drive. Because workers depend on the employer for a wage, they are in a sense a captive audience; companies routinely lie, intimidate, and retaliate to defeat an organizing drive. This is common knowledge to workers who have gone through the experience, but for most who have not, this is not always fully understood. The “Bamazon” organizing drive exposed Amazon’s fierce anti-union tactics.

Soon after the vote outcome was made public, a statement was released by the workers who led the unionizing effort. In the statement the workers detail Amazon’s blatant violation of their rights to skew the vote in the company’s favor. Amazon has shown its cards, it will take the low road and stop at nothing when it comes to preventing the union’s victory.

One of the many nefarious anti-union tactics employed by Amazon was to get an unmarked dropbox for ballots placed right in front of the Bessemer fulfillment center. This allowed company management to monitor those who were submitting ballots, and instill a sense of fear by intimidating them. Though the National Labor Relations Board (NLRB) ruled the drop box illegal, Amazon did it anyway.

Stuart Applebaum, President of RWDSU, said, “worst yet, even though the NLRB definitively denied Amazon’s request for a drop box on the warehouse property, Amazon felt it was above the law and worked with the postal service anyway to install one. They did this because it provided a clear ability to intimidate workers.” A Freedom of Information Act request was filed that showed Amazon’s frantic communications with the post office pressing them to place the drop box.

For more about the shocking anti-union tactics used by Amazon watch the video produced by A More Perfect Union.

Perhaps the most glaring problem with the vote was the engorged and exaggerated size of the bargaining unit. When the workers filed for an election to form their union through the NLRB, as a matter of common sense, the expectation was that the workers who would vote would be their coworkers at the BHM1 Amazon fulfillment center. However, despite the workers requesting their 1,500 coworkers be included, the company argued that the bargaining unit — those who would be eligible for the union and thus eligible to vote — was nearly 6,000. Most of these 6,000 workers were temporary or seasonal workers, as well as truck drivers, robotics and maintenance workers.

This artificially enlarged bargaining unit forced the union campaign to organize and win the support of thousands more workers — many of whom did not work at the center on the regular. Appelbaum said, “the bargaining unit size was larger than we thought appropriate, but the alternative was to go through several years of litigation if we didn’t accept it, prior to the vote.”

Amazon’s union busting campaign was vast. “All around the plant, Amazon had put up anti-union signs and messages. They sent messages to workers’ phones. They even had signs posted in the bathroom stalls. No place was off limits. No place seemed safe.” said Jennifer Bates, a BHM1 Amazon Worker, when testifying to the Senate Budget Committee.

Amazon even went as far as getting Jefferson County to manipulate the traffic lights — something that Jefferson County confirmed — at a location union organizers frequently used to pass out informational flyers. The traffic lights were tampered with in such a way that workers leaving the facility entering the intersection would immediately trigger a green light. This then prevented organizers from being able to talk to workers about the benefits of a union as they left the workplace. The traffic light manipulation led to two car crashes, and one organizer was almost hit by a car.

The words Karl Marx wrote in the “Communist Manifesto” are highly insightful in this situation: “Now and then the workers are victorious, but only for a time. The real fruit of their battles lies, not in the immediate result, but in the ever expanding union of the workers.”

In other words, limiting the progress of workers’ struggle to the outcome of a union vote is erroneous. What matters is if class consciousness has grown and if workers have decided to struggle at all, and if they will draw lessons and continue the struggle. Marx wrote about this irreconcilable contradiction: continuous growth and consolidation of the workers as an essential class, on one hand, and the redundancy and superfluous shrinking character of the ultra-wealthy who own everything but do nothing of value, on the other hand.

For decades, the real wages for the vast majority of workers in this country have decreased in relation to the cost of living. For decades, government assistance has been cut back. Jobs that used to provide decent wages have disappeared as new technology and automation has replaced workers. Workers are in a grave situation and what is urgently needed is a mass movement of workers organizing to change society.

Nothing could have demonstrated this better than the BHM1 workers themselves — when they courageously went out to create this movement on their own initiative, and for this, all working-class people should be grateful. Their struggle opened the door and created a rare opportunity for others to join in.

The majority-Black community of Bessemer, where BHM1 is located, offered its solidarity. Their support was vast and key to the strength of the movement. Organizers, activists, and socialists were deep in the community knocking on every door to talk about the union drive and were met with overwhelming support. Community members themselves took pro-union yard signs and flyers, and spread the word everywhere. You could not spend a day in Bessemer without noticing the support.

“Knocking on doors in support of the union drive was the most exciting outreach I’ve ever done. The community was overwhelmingly supportive. There is a deep understanding of organized labor in Bessemer. The enthusiasm we found at every door invigorated us to keep knocking, to keep getting those yard signs out”, said Jake Lindahl, a Party for Socialism and Liberation activist from Birmingham active in the community support campaign. Learn more about the PSL’s efforts in supporting the drive by watching this video.

Support for the Bessemer struggle was national and international as well. Solidarity actions were held throughout the United States, and workers from countries around the world expressed solidarity. You can find more on this on the RWDSU’s website.

The fight is not over. So long as there is struggle by workers for better conditions and dignity, there is hope for change. Class-conscious workers and socialists will be there at every step the Alabama Amazon workers decide to take.