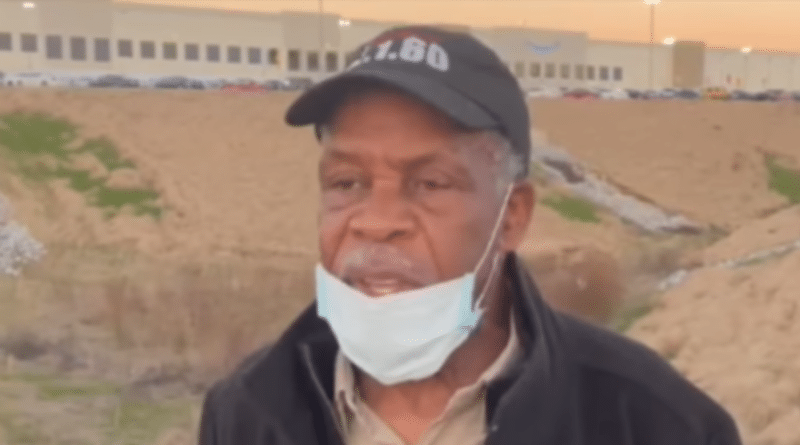 Actor and activist Danny Glover traveled this week to the most-watched Amazon facility in the country — the Bessemer fulfillment center outside Birmingham, Alabama.

The warehouse’s more than 5,800 predominantly Black workers are in the middle of a historic vote on unionization. If a majority vote in favor, they would become the e-commerce giant’s first U.S. employees to form a union.

“We simply have to stop glorifying the billionaires who are trying any way they can to disempower workers.”

In the lead-up to the vote, Amazon deployed what the union calls the “gold package” of anti-union tactics, including intimidating meetings with managers, setting up a fear-mongering web site, and plastering workplace restrooms with propaganda.

“We’re seeing all the draconian, ugly ways that corporations demonize the idea of organized labor,” Glover said in an interview with Inequality.org on February 22 before heading off to show support for the workers at the plant gate and in meetings with local officials and media. “We simply have to stop glorifying the billionaires who are trying any way they can to disempower workers.”

This is not the first time the Hollywood actor has stood in solidarity with employees of a wealthy, anti-union CEO like Amazon’s Jeff Bezos. It’s not even his first time doing it in the notoriously labor-unfriendly south.

Today I got to visit with Amazon workers in Alabama who have been organizing to form a union. Working people coming together and demanding guaranteed contractual improvements or legislative improvements is how we will enact real sustaining change throughout our Country! https://t.co/7DsQ07jp2P

Several years ago, Glover was a steadfast supporter of a campaign to organize a Nissan auto plant in Canton, Mississippi that also had a majority-Black workforce. At that time, Nissan’s CEO was Carlos Ghosn, a centimillionaire known for making veiled threats to undermine union drives.

Today, Ghosn is a fugitive, running from charges of financial wrongdoing. But under his reign, the company managed to pressure a majority of the Canton workers to vote against unionization.

Will the union leading the Bessemer campaign, the Retail, Wholesale and Department Store Union, have better luck?

Glover believes the disparities of the pandemic crisis could push the union over the top. Amazon CEO Bezos has seen his fortune expand by about $70 billion since the Covid outbreak. This makes Amazon employees’ demands for improvements in their working conditions, such as family-sustaining wages and humane break time policies, seem even more reasonable.

“I agree with Dr. Martin Luther King Jr.’s view that the best anti-poverty program is a union,” Glover said. He learned the benefits of organized labor early on, growing up with both of his parents earning middle class salaries through their unionized postal jobs.

“To this day,” Glover said, “the Postal Service is a critical source of good jobs, especially for Black workers. The union that my parents helped build up at the dawn of the civil rights movement in the 1950s is responsible for that, for creating the opportunity to live in dignity.”

Black postal workers currently make up nearly a quarter of the USPS labor force and earn higher average wages than those in other occupations in which Black Americans are heavily represented.

Glover is also optimistic that the south could rise again as a hotbed of organizing.

“These Amazon workers are building on a long history,” he said. “In the latter part of the 19th century and the early 20th century, for example, you had the cotton pickers strike and the Alabama coal miners’ strike. And there were the unionized sleeping car porters who then went to the south and became instrumental in the civil rights movement.”

What role will the Amazon warehouse workers of Bessemer play in the organizing history of the south? We’ll find out on March 30, the day after the workers’ deadline for submitting their mail-in union ballots.

Sarah Anderson directs the Global Economy Project of the Institute for Policy Studies, and is a co-editor of Inequality.org.