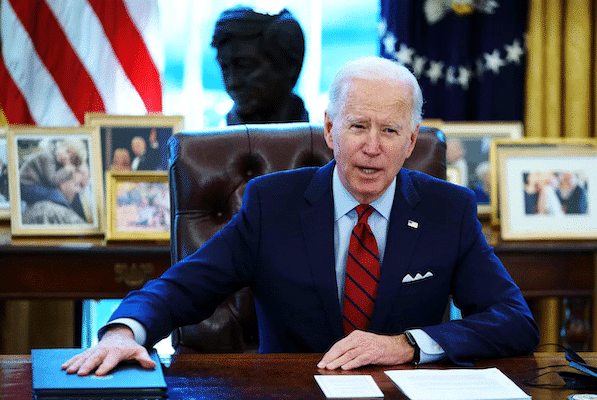 U.S. President Joe Biden’s $1.9 trillion rescue package is one of the most ambitious measures to revive the U.S. and, with it, the world economy. Coming on the heels of Trump’s $2 trillion package last year and a further $900 billion package announced in December 2020, it seeks not just to provide relief from the pandemic but to start a new boom in the U.S. which, it is expected, will have spill-over effects for the world as a whole, notwithstanding the protectionist measures against imports introduced in the U.S. under Donald Trump. It will also raise the U.S. fiscal deficit to GDP ratio to a level unprecedented in its post-war history.

The long post-second world war boom was sustained in the capitalist world by active State intervention through fiscal means. The continuation of such a boom however became impossible as finance became globally mobile: its usual opposition to fiscal deficits and to taxes on the rich for financing expenditure by national governments became thereby decisive, since globalised finance was now facing a nation-State which had to kow-tow to its whims for fear that not doing so would precipitate a capital flight. In other words, if any State persisted with active fiscal intervention then finance would simply leave that country and go elsewhere.

The U.S. however was largely free from this pressure, since its currency was considered “as good as gold”, and hence a safe medium for holding wealth, which ruled out any large-scale capital flight from the U.S. But in the case of the U.S., higher State expenditure caused a “leakage” of demand abroad, so that it got externally indebted even while creating employment abroad rather than at home. And this fact acted as a deterrent on State fiscal intervention. Trump introduced protectionism for this reason, so that the fiscal stimulation of the U.S. economy would generate employment at home rather than abroad. Despite such protection however the recent fiscal stimulation of the economy has widened the U.S. trade deficit significantly, which means that there has still been a significant “leakage” of demand abroad. It is noteworthy that Biden has nonetheless chosen to stimulate the U.S. economy fiscally without in any way tightening protectionism, at least for the present.

The obvious implication of this for the Indian economy according to most observers would be to stimulate it, as India’s exports would grow with a revival of U.S., and world, demand. There is however a fundamental difference between the immediate post-war context when a State-stimulated U.S. boom would have had multiplier effects on the Indian economy, and the current context. The difference is that at that time there had been no globalisation of finance, while today finance is globalised.

One consequence of this is that every country’s interest rate has to be aligned with that of the U.S. If for instance the interest rate in India is lower than a figure which equals the sum of the U.S. interest rate and a compensation to offset the perceived risk of making a financial investment in India as compared to the U.S., then finance would simply flow out of India into the U.S.

There is an additional reason for such dampening, which is inflation, an issue that is being strongly debated in the U.S. at present. Many economists, belonging to the centre-right spectrum, are worried that stimulation of the U.S. economy to the extent proposed by Biden will unleash inflation in that country, while others belonging to the centre-left spectrum pooh-pooh such inflation fears. Surprisingly however this entire discussion on inflation has remained focussed exclusively on the U.S., without exploring the possibility of inflation in other countries that the U.S. stimulus may generate. This issue is particularly important for India and other third world countries which provide a variety of primary commodities to the U.S., and to the advanced capitalist world in general.

The U.S. stimulus will almost certainly raise the demand for primary commodities and hence their prices, and while this may not be of much consequence for the U.S. inflation rate, it will certainly raise the inflation rate in third world primary commodity suppliers like India. The policy-response to such an increase in primary commodity inflation, will be precisely the opposite under a regime of globalised finance to what it should have been, and what it would have been under the post-war dirigiste regime. The rise in primary commodity prices because of a sudden increase in demand should ideally, enlarge State efforts to raise the supply of such commodities by increasing public investment in spheres crucial for such production. But under a regime of globalised finance, the policy response will be to curtail public investment, and public spending in general, so that it is not supply that is augmented, but domestic demand that is curtailed, to keep inflation in check. Austerity in short will be imposed on the primary commodity supplying economy so that its level of activity and hence its growth rate is restrained for this reason.

Thus for an economy like India, while there will be some increase in exports on account of Biden’s package, this would be accompanied by an overall compression in the level of activity and growth, so that enough primary commodities are squeezed out from domestic absorption to curb excess demand pressures and hence inflation.

This was not the case during the post-second-world-war boom. Governments were not obliged to obey the diktats of finance. Hence a rise in primary commodity prices was accompanied by government effort, including larger government investment, to increase the supplies of such commodities, rather than curtailing their domestic absorption through reducing government spending. For this reason, a world boom in that period could only have a stimulating effect on the Indian economy, and not a contractionary effect.

Biden’s package in short is based on an untenable assumption, namely that a Keynesian policy of stimulating the economy through fiscal means can be followed, while the Keynesian injunction that “finance above all must be national” is ignored. This untenable assumption in turn derives from the illusion that the world economy as a whole can come out of the protracted crisis to which neoliberal capitalism has consigned it without putting any restrictions on the movements of finance, ie, that the hegemony of finance does not really matter for the level of world economic activity. But while the U.S. State may not be hamstrung by the hegemony of finance, or even the States of the advanced countries as a whole acting in a coordinated fashion, the States in third world countries are not so fortunate. Instead of asking for a change in the international economic order whereby the nation-States once again re-acquire their autonomy vis-à-vis finance that is now globalised, the Biden package simply presumes that within the current order we can return to the days of Keynesian demand management to the benefit of all countries.

The basic untenability of this assumption will express itself in the fact that the pursuit of the extraordinarily ambitious fiscal stimulus visualised by Joe Biden will only accentuate the global divide, with the advanced countries forging ahead with growth while the third world countries remain mired in acute unemployment and fiscal austerity. The IMF’s discriminatory policies are working in this direction; but even without the IMF, this is the spontaneous direction that the finance-dominated world economy, if it breaks out of its current generalised stagnation through U.S. or more generally advanced country initiative, will take.

Biden’s package is well-meaning and has the support of the Left in advanced countries; but this Left also needs to be more sensitive to the predicament of the third world countries.

Prabhat Patnaik is an Indian political economist and political commentator. His books include Accumulation and Stability Under Capitalism (1997), The Value of Money (2009), and Re-envisioning Socialism (2011).