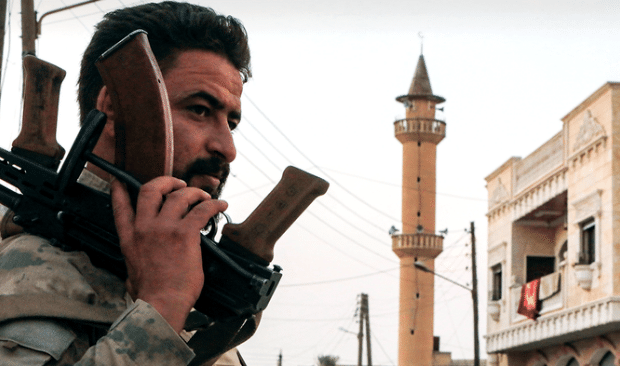 Russia, Iran and Syria have established a mission aimed at securing a safe and stable flow of oil supplies, wheat and some other materials to Syria via the Mediterranean. The mission’s work is to secure multi-sided coordination to secure the arrival of oil in the first place, especially after the fuel crisis that is the largest that Syria has witnessed in decades.

After intensive meetings, the three countries approved a mechanism for Russian warships to escort Iranian oil tankers coming to Syria, as soon as they reach the Mediterranean gate of the Suez Canal, and until they reach the Syrian territorial waters, in order to protect them from piracy or any targeting of a different nature. These initiatives come in the context of an intensifying economic war against Syria, consisting of the US occupation of oil-rich and agriculturally productive Syrian territories, a Euro-American blockade and repeated US-Israel attacks on the high seas against oil tankers bound for the country.

With the launch of tripartite coordination, interventionist attempts at siege, sabotage and starvation could be partially thwarted as arrangements are made for the provision of essential commodities.

Washington’s Strategy
Increasing collaboration between America’s strategic adversaries is a reflection of the failure of Washington’s strategy in Syria. For the USA, the Arab country was crucial for extending domination in the entire region. Syria borders Turkey, Iraq, Lebanon, Israel, and Jordan. Iran flies arms into Damascus, which are then transported over land to Hezbollah in Lebanon.

Whoever holds power in Syria will have significant, long-term impact on the region. Syria fought two wars with Israel and continued a cold war with that country ever since. It became Iran’s only Arab ally and a key supporter of Hezbollah. Syria’s continued alliance with Iran became one of the main justifications of Western attempts to overthrow President Bashar al-Assad.

Tom Donilon, former President Barack Obama’s national-security adviser, said in 2011 that the “end of the Assad regime would constitute Iran’s greatest setback in the region yet—a strategic blow that will further shift the balance of power in the region against Iran.” Syria’s location came into play with plans to build a new natural-gas pipeline. Qatar wanted to construct a pipeline from its gas fields, through Saudi Arabia, Jordan, Syria, and ultimately to Turkey. It would have provided a new source of energy for Europe and potentially competed with Russia’s gas exports.

Assad refused to sign the deal in 2009, and instead in 2012, inked an agreement with Iran for a different pipeline. It would cost $10 billion and carry Iranian gas through Iraq, Syria, and possibly Lebanon. Although the war made construction impossible, the Obama administration and its Middle Eastern partners were not pleased that Iran would have a potentially new and lucrative source of income.

From the standpoint of the US and its allies, the 2011 protests in Syria appeared like an opportunity to get rid of one of the last “rogue states” in the region and to sever the link between Iran and Hezbollah. Within Lebanon, such a development would have most likely convinced some of Hezbollah’s more pliant allies to switch sides and join forces with the pro-West, Saudi-linked Future Movement.

The prospect of a weaker Hezbollah and an ever more isolated Iran, in turn, would have advanced US, Saudi, and Israeli interests and cleared the way for greater economic integration in the Levant. For various reasons, though, a direct military intervention, as had been the case in Libya, appeared difficult in Syria. Firstly, Syria’s relatively modest natural resources meant that even after a political transition its government could not reasonably be expected to pay the cost of post-war reconstruction. Secondly, the governments of Russia and China were angry that member states of North Atlantic Treaty Organization (NATO) and their allies had interpreted the United Nations Security Council (UNSC) resolution authorizing the use of force to protect civilians in Libya as a carte blanche to bomb and destroy the country. As a result, Russia and China vetoed any resolution involving the use of force in Syria, making any intervention illegal under international law.

Proxy War
Unable to intervene directly in Syria, the US and its allies waged a proxy war to bring about regime change in Syria.

The US, Britain and France at first led a diplomatic offensive, attempting to isolate the Syrian government and to impose successive non-elected exile groups as the “legitimate representatives” of the Syrian people. Nevertheless, along with regional collaborators, particularly Turkey, Qatar and Saudi Arabia, they funded and armed all the various armed groups. Turkey provided training grounds and a staging post for attacks on northern Syria. Qatar funded the Muslim Brotherhood (a Sunni Islamist organization) and provided arms through Turkey, recruiting foreign fighters, for example from Yemen, to be trained by US Special Forces in Qatar before being sent to Syria.

Saudi Arabia, which armed the insurrection from its beginning in March 2011, backed various foreign groups including Pakistani Taliban. From 2012 onwards, foreign Salafi-jihadists, from a range of countries including Saudi Arabia, Libya, Tunisia, Yemen, Iraq, Chechnya, Pakistan and various parts of Europe, began participating in large numbers. Muslim Brotherhood and Salafist forces were able to prolong their attacks because of the participation of thousands of outside fighters, most often paid by Qatar and Saudi Arabia and trained in Jordan and Turkey. Indeed, the Syrian Islamists had been effectively defeated by early 2012; but they were reinforced by many thousands of foreign jihadists, most of them passing through Turkey.

Over the course of 2012 and 2013 foreign state support for the insurgency progressively brought ever larger pockets of territory under rebel control: first the Jebel Al-Zawiya, in the Idlib governorate, along the Turkish border; then a series of neighborhoods and small towns between Homs and Zabadani, along the Lebanese border, as well as some of the suburbs of Damascus; and eventually the eastern borderlands and parts of the city and the countryside of Aleppo. In 2014, Raqqa was captured by the Islamic State of Iraq and Syria (ISIS), becoming the first provincial capital to fall under rebel control The forward march of jihadists was temporarily halted by a fraternal struggle that opened up in 2013 between Jabhat al-Nusra and ISIS.

Abu Bakr al-Baghdadi—the emir of the Islamic State of Iraq who had set up Jabhat al-Nusra as the al-Qaeda front in the Syrian war—changed the name of his group to ISIS, including Syria in his dominion and telling his al-Nusra acolyte, Abu Mohammad al-Golani, to work under him.

Al-Nusra and ISIS had slightly different goals, with the latter less interested in the fight against Assad alone and more interested in the creation of an emirate. Beginning with 2014, ISIS engaged itself in a war within a war, in which it battled the rest of the Syrian armed opposition, jihadi and non-jihadi. Up to 7,000 fighters may have been killed in this fighting. ISIS would retain control of Raqqa and eastern Syria, and all other rebel groups retrenched in the Aleppo and Idlib governorates and remained dominant in the rebel fronts along the Lebanese border, in the south, and in the suburbs of Damascus.

Western support for the Islamist opposition in Syria was firmly situated in the context of post-Arab Spring developments elsewhere in the region: between late 2011 and early 2012, Ennahda (an Islamist party) and the Muslim Brotherhood had won elections in Tunisia and Egypt respectively, and the governments of the US and its allies had for the most part come to terms with them. Erdogan’s Turkey meanwhile positioned itself as an interlocutor and advocate for Islamist rule in the Arab world. Indeed, Erdogan had long contended that political Islam, democracy, and capitalism were fully compatible and at this time many Western leaders appeared to believe his narrative.

In Libya, meanwhile, Qaddafi had been killed, violent forces had seized Tripoli, and nationwide elections were in the works, with Islamists playing once again a prominent role in the political process. In Syria, Western support for a largely Islamist insurgency was thus part of the same broad strategy, aimed at promoting greater imperialist integration.

Ending Interventionism
The prolongation of the proxy war in Syria has brought sheer devastation for civilians.

There is thus an imperative need to immediately stop this war. On April 6, 2021, Massachusetts Peace Action called on all progressives and peace activists to support the following demands: 1. Ending US military intervention and occupation of Syrian territory. 2. Ending US military and diplomatic support to the armed opposition, 3. Ending US sanctions on Syria so the country could begin a process of economic re-construction.

These demands need to be emphasized by peace movements all over the world so that Syrians are allowed access to basic rights. Of a population of about 21 million, some six million Syrians are internally displaced and another five to six million refugees have fled the country for different reasons. Without the end of interventionism, these horrors will continue to plague Syria.

Featured image: A Syrian fighter looks on while on guard duty in the west of Tal Abyad in Raqqa province, along the front-line with Syrian Kurdish forces. (AFP)