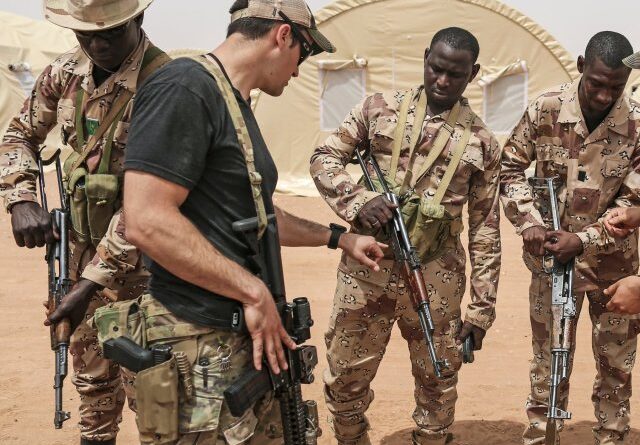 On International Human Rights Day, BAP calls for the U.S. to end its military occupation of the African continent

December 10, 2021 — The US Africa Command, AFRICOM, has launched “Task Force Red Dragon,” which includes more than 2,000 Virginia National Guard (VNG) personnel (by January), the largest VNG deployment since WWII. Added to that will be National Guard Soldiers from Maryland and Kentucky which totals the most soldiers the division has mobilized since 1942. While Maj. Gen. Timothy P. Williams, the Adjutant General of Virginia said, “The soldiers of Task Force Red Dragon are great examples of citizen-soldier service.” The Black Alliance for Peace (BAP) rejects the idea that there is any useful service to be had in the continuing U.S. interference in the affairs of sovereign nations on the African continent or elsewhere. BAP demands not only the withdrawal of all U.S. troops in Africa, but the closure of all U.S. bases throughout the world.

According to BAP National Organizer Ajamu Baraka, “U.S. president Joe Biden is exploiting International Human Rights Day with his farcical and exclusionary “Summit for Democracy” in an attempt to advance the obscene notion that the U.S. and by extension the colonial states of Western Europe are somehow the defenders of democracy and human rights. This is despite the increasing lawlessness of the U.S. state in the form of murderous sanctions, support for coups, illegal wars, military agreements and anti-democratic destabilization campaigns in nations across the planet. These actions represent a massive assault on democracy and the dignity and human rights of colonized and racialized peoples and nations across the planet.”

AFRICOM is responsible for all US Department of Defense operations, exercises, and security operations on the African continent, its island nations and surrounding waters. AFRICOM initially began in 2007 and became fully operational on October 1, 2008. AFRICOM maintains relations with 53 African countries. AFRICOM’s role is to support and work in tandem with US foreign policy in Africa to support its national interests.

As Netfa Freeman, co-cordinator of BAP’s Africa Team, reminds us, “the real purpose of AFRICOM is to enable terrorism while at the same time prosecuting the “war on terror” in Africa. This contradictory action ensures that Africa is in a constant state of war and instability. In doing so AFRICOM nurtures and justifies its own reason for being while developing a dependence of African states on AFRICOM for their defense.“

BAP believes that this is done to comply with  US and its European allies ‘strategic interests and objectives to have unfettered access to Africa’s natural resources via their comprador neocolonial “partners”. The dependency on AFRICOM by partner African states also facilitates the training of most of Africa’s military by US or NATO forces thereby increasing  their allegiance to US imperialist interests. Research also shows that since the founding of AFRICOM there has been a marked increase in militant extremist groups operating in Africa.

While the Black Alliance for Peace is committed to peace, we understand there can be no peace without justice, and we will stand in solidarity with all peoples (and nations) who strive to liberate themselves from all forms of neocolonial oppression. BAP takes a resolute anti-colonial, anti-imperialist position that links the international role of the U.S. empire to the domestic war against poor people and working-class Black people within the United States. We unequivocally support and uplift mutual cooperation, solidarity, and peace among all parties and people in Ethiopia, Eritrea, and the broader Horn of Africa region.

The U.S.-EU-NATO axis of domination will ultimately find its deathbed in Africa at the hands of the Pan-African masses. We support African-led, localized conflict resolution that is not tied to advancing imperialism, neo-colonialism or any other nefarious Western agendas.

International human rights day is a perfect opportunity to reaffirm our commitment to authentic democracy and People(s)-Centered Human Rights.

The deployment of U.S. troops to Africa and the phony democracy summit are a reminder that we must remain vigilant against all efforts to confuse the real intent of the U.S./EU/NATO Axis of domination. All of our organizing and mobilizations must have one objective- to  forge transcontinental public cooperation that will save ourselves from the greatest threat to peace and stability on the planet, the U.S. government.