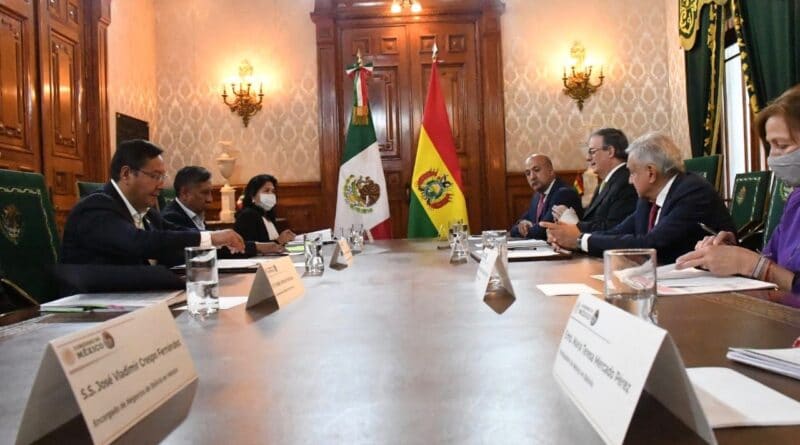 Bolivian president Luis Arce returned to Mexico on March 24 in a historic official visit. It is the the first time the president has visited the country since he was there in 2019-2020 when he was given diplomatic asylum. The visit has been marked by increased efforts of cooperation between the governments of Luis Arce and president Andrés Manuel López Obrador on the 190th anniversary of the establishment of diplomatic relations between Bolivia and Mexico.

On March 24, Arce and López Obrador agreed on the importance of promoting the exclusively technical, objective and impartial nature of the election observation missions of the Organization of American States (OAS).

The heads of the state emphasized that these missions must adhere to the principles of non-intervention, respect for self-determination, dialogue, negotiation, the search for consensus and the peaceful solution of controversies, considering as a priority the construction of a multilateralism that favors the well-being and dignity of the people. They also agreed that there is a need for the OAS Secretary General, Luis Almagro, to limit himself to acting within his institutional framework and refrain from intervening in the internal affairs of the member states.

The decision was taken in the light of the participation of the OAS in the coup d’état in Bolivia against the democratically elected president Evo Morales in November 2019.

After the general elections of October 20, 2019, in which Morales obtained over 10% more votes than his closest rival, which was necessary for victory, the country’s opposition refused to accept the results alleging that an electoral fraud had been committed, and began violent mobilizations demanding Morales’ resignation. The OAS election observation mission and Almagro supported the Bolivian far-right’s false claims and their call for the annulling of the elections. The South American Parliament (Parlasur) is investigating the role played by Almagro in the post-electoral crisis that broke out in Bolivia in November 2019.

Recently, Almagro once again intervened in the internal affairs of Bolivia. On March 15, Almagro criticized the arrests of the leader of the coup-installed regime Jeanine Áñez and her former ministers, questioned the judicial process against them and accused the Arce’s government for using “repressive instruments”.

Áñez and her former officials and ministers were arrested on March 13 and are being investigated for involvement in the coup as well as in the Sacaba and Senkata massacres and numerous other human rights violations committed under Áñez’s rule against the people who resisted the coup. They have been charged with terrorism, sedition and conspiracy crimes, which left 36 people dead and hundreds injured, according to the Inter-American Commission on Human Rights (IACHR).

Several international leaders and organizations, including president López Obrador, have rejected the interference and meddling of the OAS in Bolivia and urged the organization to respect democracy and the will of the Bolivian people, who are demanding justice for all the crimes committed by Áñez’s regime.