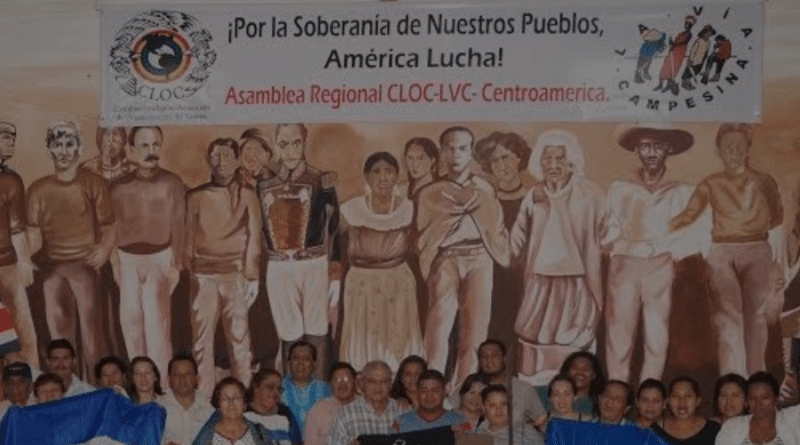 Members of the Sanctions Kill coalition are currently in Nicaragua as guests of the Friends of the ATC (the Association of Rural Workers) to learn about the Sandinista Revolution and the impacts of the recent economic war being waged by the United States against it. The ATC is a member of the global Via Campesina movement. Nicaragua is putting concrete programs in place to uplift its people by focusing on eradicating poverty, providing basic necessities such as health care, education, retirement security and more, and empowering sectors of society that are typically at a disadvantage. A major focus of the Nicaraguan government is achieving food sovereignty using farming methods that are rooted in sustainable and organic methods and supporting small farmers. Clearing the FOG speaks with Erika Takeo of the Friends of the ATC, Antonio Tovar of the Farmworkers Association of Florida and Paul Oqwist of the Nicaraguan government.

Subscribe to our show on iTunes, SoundCloud, MixCloud or Stitcher.

Erika Takeo is a Nicaragua-based organizer and national coordinator of Friends of the ATC, a solidarity network with the Asociación de Trabajadores del Campo (ATC, or Rural Workers Association), an organization of struggle that defends rural workers and peoples.

Antonio Tovar is a Principal Investigator at the Farmworker Association of Florida (FWAF), where he works since 2005 as researcher, organizer, educator, and director. Before moving to Florida in 1998 Antonio worked as a journalist in his native Mexico, the Caribbean, and Central America. In Florida, he studied Medical Anthropology at the University of Florida and joined research teams at University of South Florida College of Medicine and Public Health, University of Florida Department of Nursing, Bureau of Business and Economic Research, the College of Law, and the Institute of Food and Agricultural Sciences. At the Florida Department of Health, he was the Pesticide Poison Investigator at the Department of Epidemiology Pesticide Surveillance Program. Antonio is Fellow at the Robert Wood Johnson Foundation Interdisciplinary Research Leaders, and Board member of the Community-Campus Partnership for Health (CCPH) and the Florida Immigrant Coalition. He represent the FWAF, a 39-year-old grassroots statewide membership organization, at La Via Campesina North America and the US Food Sovereignty Alliance.

Dr. Paul Oquist is Minister-Private Secretary for National Policy for the President of the Republic of Nicaragua, Commandant Daniel Ortega Saavedra.

Dr. Oquist is a third-term member of the Standing Committee of Finance (SCF) of the UNCCC. He represented the SCF in the Interim Directorate of the Warsaw Mechanism of Losses and Damages.

He was a member for two consecutive terms (2010–2017) of the United Nations Economic and Social Council (ECOSOC) Committee of Experts on Public Administration (CEPA).

Dr. Oquist has been Nicaragua’s Head of Delegation at every Conference of the Parties of the Framework Convention on Climate Change since the last part of COP-15 in Copenhagen. In COP-21, in Paris, Dr. Oquist communicated the Nicaraguan position not to sign the agreement and to demand a greater level of ambition from large emitter countries in accordance with their historical responsibilities, in order to limit global warming to 1.5°C in this century. By COP-23 in 2017 in Bonn, the need for greater ambition was a consensus position of most countries, and Nicaragua signed and ratified the Paris Accord. In his message to the UN General Assembly in 2015, President Daniel Ortega Saavedra maintained that countries with climate change losses and damages have a right to claim indemnization and compensation from the largest historical emitters (1880–to date) in proportion to their level of responsibility. The Nicaraguan delegation has maintained this as the only position that is both scientific and just.

Dr. Oquist was also the spokesperson for the ALBA countries at COP-15 in Copenhagen in their defense of the multilateral negotiating process in the face of the attempt to impose a parallel document initiated by the largest emitters without multilateral negotiations that take into account developing countries. The one-sided document was successfully blocked.

In recent COPs, Nicaragua has stressed the urgency of the current situation based on the latest scientific information available and given the gravity of recent catastrophic climate events. The Report on the 1.5°C, on which Nicaragua and Bolivia insisted at COP-15, was assigned to IPCC and presented in October, 2018. The findings are that to limit climate change to 1.5°C average world temperature in this century, it is necessary to reduce emissions 45% by 2030 and achieve a zero-emission, sustainable society by 2050.

Dr. Oquist was Senior Adviser to the President of the 63rd General Assembly of the United Nations, Father Miguel D’Escoto Brockmann. In that capacity he was Chief Negotiator for the Second Financing for the Development Meeting held in Doha, Qatar, in November, 2008, which surprisingly approved a high-level United Nations meeting on the “Financial and Economic Crisis and its Impact on Development” that Dr. Oquist coordinated on behalf of Father D’Escoto in June 2009. He also liaised with the group of high-level economists who prepared an Expert Paper for the Conference under the direction of Nobel-winning Professor Joseph Stiglitz of Columbia University.

Dr. Oquist was Regional Expert on Governance for the Asia Division of the United Nations Development Program (UNDP) based in Islamabad, Pakistan (1998–2006). He was Senior Technical Adviser for the UNDP Management Program in Mongolia (1993–1998) and Director of UNDP Public Administration Projects in Quito, Ecuador (1975–1979). In addition, Dr. Oquist was a consultant for UNDP and UNICEF at the highest level of government in Colombia, Ecuador, Kyrgyzstan, Vietnam, and the Philippines, where he undertook eight policy assessments on “Peace and Development in the Southern Philippines” for the Multi-Donor Support Group between 1999 and 2006.

In 2019, Dr. Oquist represented Nicaragua at the 49th Session of the Intergovernmental Panel on Climate Change (Kyoto, Japan); at the United Nations Climate Action Summit (New York, U.S.A.); in the Conference of the Parties of the United Nations Convention to Combat Desertification (New Delhi, India); at the 2019 Forum of the Standing Committee on Finance on “Climate Finance and Sustainable Cities” (Beirut, Lebanon); in the High Forest Cover and Low Deforestation Conference on Climate Finance Mobilization (Paramaribo, Surinam); at The Fourth Session of the UN Environment Assembly (UNEA-4) (Nairobi, Kenya); at the Petersberg Climate Dialogue X (Berlin, Germany); the XVII Summit of the Heads of State and Government of the Non Aligned Movement (Baku, Azerbaijan); the CELAC V Think Tanks Forum (Beijing, China); at The Our Oceans Conference (Oslo, Norway); at the CEPAL Sustainable Development Conference (Mexico City, Mexico); at the Italy–Latin America and the Caribbean Conference (Rome, Italy); and the 10th Bosphorus Summit (Istanbul, Turkey).

In 2018 Dr. Oquist represented Nicaragua with interventions on Nelson Mandela at the General Assembly and in defense of Venezuela in the Security Council of United Nations (New York, U.S.A.); at the Ministerial Conference on Nuclear Science and Technology (Vienna, Austria); and the Global Insurance Forum (Berlin, Germany).