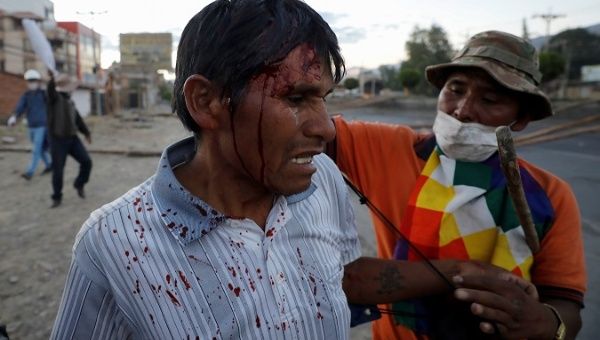 In its eagerness to halt popular support for Evo Morales, the U.S.-backed regime is violating human rights indiscriminately.

Bolivia’s coup-born government on Monday intensified its attack campaign against the Movement to Socialism (MAS) supporters, who keep protesting in the streets.

Interior Minister Arturo Murillo announced the creation of a “special apparatus at the Prosecutor’s Office” to arrest MAS lawmakers for promoting “subversion and sedition”.

Upon hearing this announcement, Bolivia’s president-in-exile Evo Morales announced that Murillo’s decision would increase political persecution against those citizens who are fighting the regime headed by the self-proclaimed Interim President Jeanine Añez.

An example of the sort of violence that her government is encouraging occurred early on Tuesday when Mario Chore was arrested by the military who wanted him to confess he was a MAS militant.

He was arrested at the request of Maria Alvarez, a right-wing politician who felt upset because she thought Chore was filming her at a square where a demonstration was taking place.

License to kill in Bolivia: Jeanine Añez exempts the military from “criminal responsibility”. The meme reads, “In Bolivia, things are not well and will not likely improve because now Bolivia’s ‘Interim’ President Jeanine Añez has signed a decree that exempts the military from criminal responsibilities caused by the exercise of repression against citizens.”

Likewise, on Tuesday morning, the Bolivian student group GEA denounced that the police were raiding homes in search of evidence to link students with marches carried out on Monday.

“At this time two more raids on homes of People’s Congress militants are also taking place,” the GEA group reported.

Last night, at 11:30 pm (local time), police also attacked a peaceful vigil that farmers, kids, and elderly people were carrying out in Cochabamba.

“They began to repress us by throwing tear gas but the people are united,” National Confederation of Indigenous Female Farmers spokesperson Maribel Avalos said and added that “Añez is racist.”

The vigil was intervened by the police, following orders from the Interior Minister Murillo, who said he will have a hard hand with the seditious, alternative media La Resistencia reported.

“Let them start running, we are going to grab them. We will not allow even one person to continue encouraging sedition​​​​​​​,” Murillo said when he took office on Nov. 14.

As part of her witch hunt against the Left, self-proclaimed interim president Añez said that the MAS does not have guaranteed participation in the next elections, for the Supreme Electoral Tribunal “will have to decide whether or not MAS will participate again.”​​​​​​​​​​​​​​

Coup in Bolivia. The repression in Senkata, El Alto, began.

Previously, Añez signed a decree whereby the Armed Forces cannot be criminally prosecuted for the actions they deploy to control citizens.

“Personnel of the Armed Forces, who participate in operations for restoring order and public stability, will be exempt from criminal responsibility when, in fulfillment of their constitutional functions, they act in legitimate defense or state of necessity,” the coup-based government’s decree states.

“What does this mean? The new Bolivian government is being overtaken by protests… it has increased its authoritarianism and eliminated guarantees to which citizens are entitled by the rule of law​​​​​​​” alternative outlet Sin Linea explained.

“In practice, the decree means giving the military a license to kill.”​​​​​​​