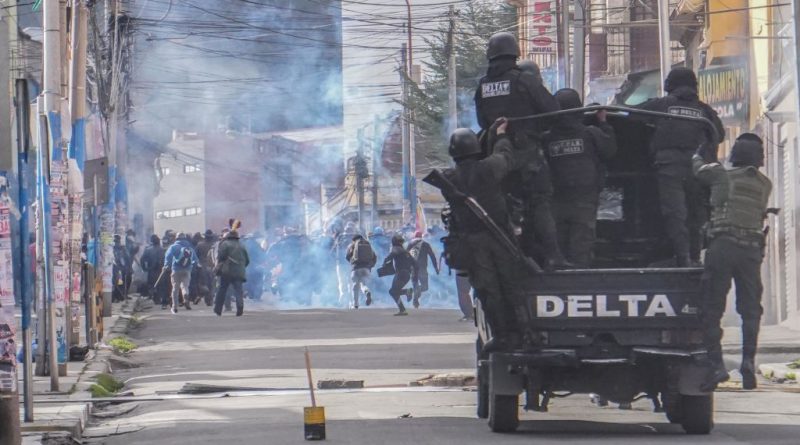 Bolivia is currently ruled by an unelected president, Jeanine Áñez, whose government is now responsible for nearly two dozen deaths and hundreds of injuries after Evo Morales’s overthrow. The situation is dire — but this is far from the first time the country has seen a coup in defense of Bolivia’s elites.

Extracontinental power transitions are frequently called “revolutions” by their authors and “coups” by those who resist. For a large plurality of Bolivians, last week’s forced resignation of President Evo Morales fits the latter category. Morales was elected to his third term in 2014 by the highest percentage of votes — 63 percent — of any free election since universal suffrage, and he was set to begin an unprecedented (for Bolivia) fourth term after polling in at 47 percent on October 20, more than ten percentage points ahead of his closest competitor.

Fueled by distrust among his detractors, however, the second place candidate refused to accept the results and was backed up by a dubious OAS (Organization of American States) report alleging electoral fraud. Independent analyses showed that alleged irregularities were statistically insignificant, but the report cast doubt on the election and justified for some Bolivian and foreign liberals what amounted to an extra-constitutional putsch. Responding to several days of middle-class protests, punctuated by violent right-wing attacks on electoral offices, some police abandoned their posts and joined the uprising.

The presidential palace’s tactical SWAT teams rose up on Saturday, November 9, parading with right-wing civic leader Luis Fernando Camacho through the streets. Rather than accept Morales’s agreement to hold fresh elections, their call for the president’s resignation was quickly echoed by similar statements on Sunday from the national police commander and the commander in chief. Citing a lack of police and military support, coupled with violent attacks on his family and his supporters, Morales resigned on Monday and, after spending the night with his supporters in the coca-growing region of Chapare, flew into exile on Tuesday.

Putting events over the past few weeks into context, they bear striking resemblance to previous Bolivian coups d’état, especially General René Barrientos’s 1964 Revolución Restauradora (Restorative Revolution) and, to a lesser extent, Colonel Hugo Banzer’s 1971 Frente Popular Nacionalista (Popular Nationalist Front). The 2019 coup looks more like 1964 at first glance, at least in terms of the domestic balance of forces, but important differences in international machinery point to something with shades of 1971. The common factor in all three coups is they targeted an anti-elite government that had alienated some liberal and leftist intellectuals, not to mention sectors of the urban professional class. These comparisons will not only facilitate a better understanding of the ongoing Bolivian coup, they will also permit some speculation about a way out.

The 1964 coup took place in early November, shortly after a popular, anti-elite president won easy reelection for a constitutionally disputed third term. Víctor Paz Estenssoro’s Movimiento Nacionalista Revolucionario (MNR, Revolutionary Nationalist Movement) had already governed for twelve years, having put vice president Hernán Siles Zuazo into the presidency during the party’s second four-year mandate. There was no doubt that Paz Estenssoro would win, so opposition parties tried to discredit the election by engaging in an organized abstention. Urban professionals, especially in lowland Santa Cruz, had long disparaged the MNR as a party of indigenous peasants, and cruceños (denizens of Santa Cruz) played a major role in agitating for a coup, along with right-wing Falangist students throughout the country. On the Left, especially in the mining camps and to a lesser extent the universities, small groups thought the MNR’s overthrow would usher in a real revolution, while most mainstream Marxists — including the leadership of the Communist Party — preferred to live with the MNR.

There is, however, an important difference that frustrates simple comparisons between the ongoing coup and the one that occurred fifty-five years ago. Namely, the United States was opposed to the 1964 coup, having already penetrated the nationalist government and built up a powerful secret police force with the help of the CIA. Moreover, the US Embassy seemed to be making progress convincing the MNR to use USAID (US Agency for International Development) funds and weapons to begin destroying Marxist and communist-led trade unions in the mining camps. This meant that when Bolivian military officers decided to secretly encourage civilian protesters, and vice versa, they did so despite stern warnings from US officials in La Paz. In parallel to deepening alliances between the MNR and Washington, Cuba and the Bolivian Communist Party both eventually denounced Paz Estenssoro as “yesterday a nationalist, today Washington’s peon.”

Swashbuckling coup plotter and future president René Barrientos, who cultivated a tough image not unlike Sunday’s civilian protagonist Luis Fernando Camacho, was undeterred by US opposition. Temporarily allying with far-left forces, Barrientos asked his president to resign on November 3, secretly promising US officials that “elimination of Communists will be the first order of business.” Wishing to avoid civil war, Paz Estenssoro fled to Lima, Peru, early the next morning. Military forces moved in to secure the presidential palace, and waves of civilian resistance to the coup began in earnest. Washington’s anti-coup position in 1964 stands in stark contrast to what took place in 1971 and 2019, cases where Juan José Torres and Evo Morales, respectively, showed greater solidarity with the domestic and international left, which generally returned (and continues to return) the favor.

It is striking how slowly coups unfold in real time, as the power vacuum left by an ousted president sparks fierce jockeying between social sectors. As in 2019, the 1964 coup government first repressed indigenous peasants loyal to the ousted MNR, mostly in La Paz, while securing a tense and extremely unstable modus vivendi with some sectors of organized labor. Within a few weeks, however, the coup’s politics had reversed. Under strong US pressure and after an injection of large quantities of CIA money, the military formalized its pact with the indigenous peasantry while meting out fierce repression against anti-coup leftist workers in the factories and mines. This means that the Restorative Revolution did not look like a coup to all sectors of the population until repression reached a crescendo several weeks later with the disarming of the police and a military invasion and occupation of the mines.

Today it is the destruction of the coca fields that tempts the self-appointed government of Jeanine Áñez, and it stands to reason that Washington’s highest priority may well be the destruction of the leftist coca growers’ union and the return of the Drug Enforcement Agency to Bolivia. In the aftermath of 1964, military officers dragged their feet, not wanting to stain their institution with the blood of the country’s working class. It is therefore not beyond the realm of possibility that the military will ignore Áñez’s order and push her out of office. Some anti-coup demonstrations have already been calling for segments of the military to wage a countercoup against Áñez and the tactical police units that helped put her minority (4 percent) party into power.

While we do not know the precise role played by the United States in recent Bolivian events, we do have some clues. For many years, the US government has provided overt financial support to opposition political parties and civic groups, including to many of the groups that have been engaged in violent insurrections and coup plotting since at least 2008. This is merely a coincidence, Washington assures the world, pointing out that its conduits such as USAID, the National Endowment for Democracy (NED), and the International Republican Institute (IRI) are technical organizations that engage in completely nonpolitical development work, such as helping “political parties and civil society organizations . . . craft citizen-oriented campaign strategies.”

The use of private foundations to channel US taxpayer dollars abroad goes back a very long time — in 1964, USAID quietly funneled huge sums of money to help both pre- and post-coup governments destroy the mine workers’ union. Seeking to lessen US-funded pressure on his democratic government, Evo Morales expelled the US ambassador in 2008, for getting caught secretly meeting with opposition figures in the midst of a violent coup attempt. He did the same with USAID five years later, for using “charity” as a fig leaf for “manipulation . . . domination . . . [and] subjugation.” But Morales never made a move against NED or IRI, which gave more than $1 million to opposition parties and civic groups over the last three years alone. Furthermore, coup plotting seems to have increased since the elections of Trump and Bolsonaro, which, at the very least, provided spiritual inspiration for the conspirators. Leaked recordings of their conversations reveal that the plotters were certain that they either had US support or would have no trouble getting it.

Like coups throughout Bolivia’s history, 2019 probably required a great deal of improvisation. While it is likely that Trump preferred Luis Fernando Camacho, a right-winger after his own heart, it is possible that some in the State Department were hoping that a moderate capitalist would end up on top, someone like Carlos Mesa, who came in second in the October 20 poll. It will take a long time to discover the precise nature of the Trump administration’s involvement in Evo Morales’s ouster, but the results of it are clear: Bolivia is currently being ruled by a de facto, self-appointed president whose government is responsible, according to the OAS Inter-American Commission on Human Rights, for the deaths of twenty-three and the injuries of 700 who have fallen while resisting Bolivia’s dramatic backslide.