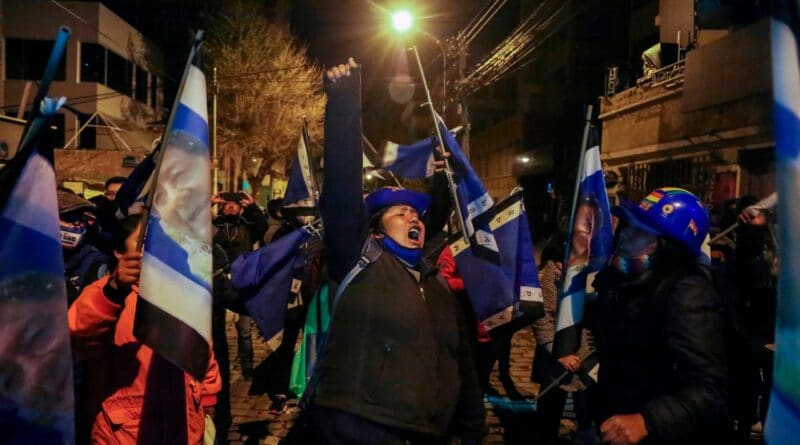 Last October 18 in a widely publicised election Bolivia chose its new president under a socialist banner. Luis Arce of the Movimiento al Socialismo (MAS) – Evo Morales’s party – received more than 52% of the votes. He is the president-elect of Bolivia.

De facto ruler Jeanine Añez, and rival candidate Carlos Mesa have conceded. Several governments, including the Venezuelan and the Nicaraguan governments, have congratulated Arce. OAS Secretary General Luis Almagro also acknowledged Arce’s victory. Almagro’s OAS observers of the 2019 election have been held responsible for “dishonest, biased, and unprofessional conduct” by falsely calling a fraud that triggered a series of events leading to the military coup last November. For the sake of a wide perspective we need to mention that Canada – at the head of the so-called Lima Group – has been part of that group of election observers and is considered to be complicit in the Bolivian coup. At the time of writing Ottawa has kept an intriguing silence about the recent election results despite the public challenge to do otherwise.

In a recent article Andrew Korybko provided some early observations on the significance of the electoral victory of Luis Arce. Some observations can be expanded on. For example, the notion of free and fair elections is accurate by and large. No major incidents were reported. However, the election has had a wide international visibility – “many observers” were watching – and that possibly prevented a major fraud under the “eyes” of the world.

Further, the coup regime may have hoped for their success by instilling fear in voters and hoping for a low turn out at the polls (despite the fact that voting is obligatory in Bolivia) with a large display of the army on the streets of La Paz, contrary to the law establishing that the army should remain in their barracks on election day. If the ruling regime intended to prevent a “civil war” that was the wrong approach. The heavy military show of force failed in the face of a determined population ready to be heard electorally and confident of their majority.

The de facto Interior Minister Arturo Murillo, who masterminded the heavy-handed military presence and carried out major serious violent repression of the indigenous population since the beginning of the coup regime last November, has just been dismissed by Jeanine Añez. Little is known about his temporary replacement and the intention of this government shuffle just before the end of her “mandate”.

Korybko is correct saying that “Bolivia should brace itself for another counterrevolution.” But it is not accurate that “the US’ response is uncertain since this is uncharted territory.” During the 11 months the Jeanine Añez regime has pushed through neoliberal privatisation of natural resources and state-owned businesses, borrowed from organisations like the International Monetary Fund and fully aligned her country’s foreign policy with U.S. foreign policy.

The Bolivian domestic corporate sector may in fact be unhappy with the election results and therefore be prone to a counterrevolution. But so is Washington that has a long history of dominating Latin America. Morales has been reported saying that Washington “does not forgive us that we recovered the natural resources, nationalised gas, started the industrialisation of lithium as a State, closed the U.S. military base and expelled the DEA”.

What we don’t know how soon the U.S.-supported counterrevolution will begin.

On the other hand, we can almost predict with certainty that a new hybrid war will resume in due time, and Bolivia will join Venezuela, Nicaragua and Cuba as the recipient of U.S. fixation against socialist policies. We need to be alert about any of a series of clues.

When will we start seeing street violence being staged in Bolivia that corporate media will report as the action of a “repressive” government?

When will we start seeing calls to the Bolivian military for mutiny? The lack of loyal military may well be the weakest point in Arce’s government.

When will the first U.S. sanctions against Bolivia be issued? On what ground?

When will we start hearing accusations of drug trafficking in Bolivia? Coca production has already been an issue for the U.S.

When will we start seeing foreign-induced inflation in Bolivia?

When will we start seeing food and medicine shortages in Bolivia?

When will we start seeing fake accounts on social media demonising the legitimate government of Luis Arce?

Our wish of course is that we would never see any of those actions of war happening. Our wish is that no interference whatsoever would take place in Bolivia and that the rightwing forces would value democracy over violence. But this should not only be a wish. This is a right to sovereignty. This is a prerogative that demands all other countries to abide to the UN and OAS Charters as well as other international laws.

The Bolivian government under Evo Morales has shown during 14 years a solid administration with economic and social progress, but also with abidance to peace and democracy. President-elect Luis Arce has already announced that his first measure will be anti-hunger bonds for the poor.

Finally, in addition to a socialist victory, we cannot ignore that this is an indigenous victory. Bolivia has a large indigenous population but the number is not the main factor. This sector of the population has regained a deep socialist consciousness that has its historic roots in more than 500 years of colonisation and has been revitalised during the 14 years of the first indigenous government that restored the long-lost sense of pride and dignity in the Plurinational nation.