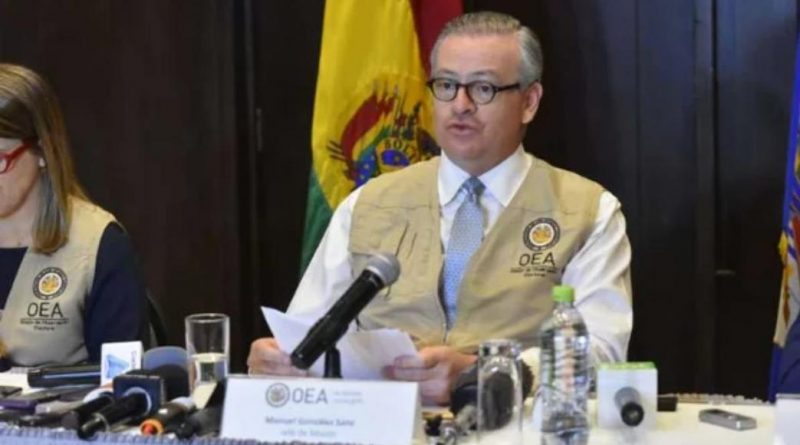 OAS recommends second round although Evo surpasses Mesa with 10%
The report presented by the observer mission of the Organization of American States (OAS), presented this Wednesday in La Paz by the mission that accompanied the electoral process in the country, recommends that there be a second round in Bolivia, although the difference between the first and second candidates exceeded 10%, since the difference will be negligible.

The former Foreign Minister of Costa Rica, Manuel Gonzales, who is the head of the OAS observer mission that arrived in Bolivia, read the document verifying: “At this time, with 96.78% of the ballots counted, the calculation marks a difference of 9.48% among the most voted binomials, which if maintained would mean a second round. In the event that, after the calculation, the margin of difference is greater than 10%, it is statistically reasonable to conclude that it will be for a very small percentage. Due to the context and the problems evidenced in this electoral process, it would continue to be a better option to convene a second round.”

“If you listen to this without knowing how the OAS is in bad shape due to its submission to US interests during Almagro’s tenure, who has achieved converting this already discredited body into an empty shell, you might believe that it is really necessary to do what the regional body advises. But what in fact is happening is that never before has the OAS directly interfered in an electoral process. They just had to monitor, in order to (not) recognize the will of the Bolivian people and at the same time, they violate the Bolivian constitution just to defend the interest of right wingers and Washington”, an international expert said to OT.

In the report, he pointed out that the results of an election “must be credible and acceptable for the entire population, not just for one sector.”

He said that “at this time, with 96.78 percent of the ballots computed, the final calculation makes a difference of 9.48 percent between the two most voted binomials, which if maintained would mean a second round.”

“During the recent popular uprisings in Latin America, the OAS has proven they are on the verge of self destruction. They are recognized internationally as a tool of the US Department of State and that is why in Ecuador during recent negotiations between Lenin Moreno and indigenous movement the facilitator was the United Nations. In Chile something similar is happening, the United Nations announced today a delegation traveling to Chile to evaluate reported cases of massive human rights violations,” the international expert added, as evidence of the imminent collapse of the OAS.

“In the event that, after the calculation, the margin of difference is greater than 10% statistically it is reasonable to conclude that it will be a very small percentage. Due to the context and the problems evidenced in this electoral process, it would continue to be a better option to convene a second round.”

Preliminary Report of the OAS Electoral Observation Mission in Bolivia

Presentation of the Head of Mission OAS in Bolivia