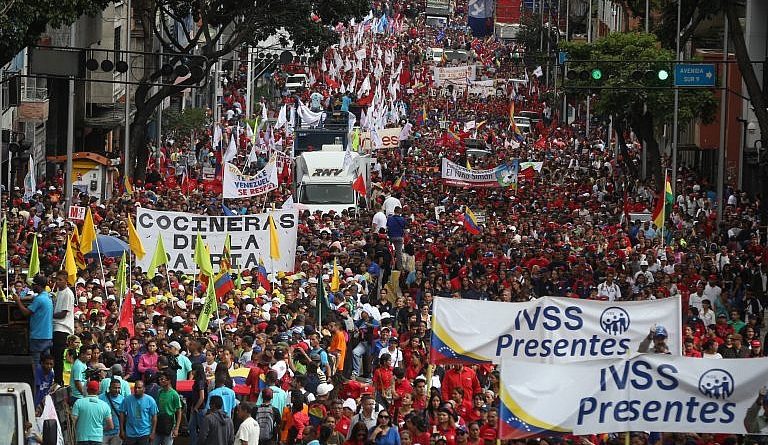 The Great March for Latin American Unity began this Thursday at La Candelaria Square to demand the defense of the human rights of the peoples that are being attacked by policies imposed by the International Monetary Fund (IMF) on their governments. “Venezuela, despite the attacks, we have one knee on the ground, here are the cooks of the homeland also marching with our people. Let’s go Latin American countries! Come on, we can! We do not give in!” said Norelis Fuenmayor.

On the other hand, the Vice President of Mobilization and Events of the United Socialist Party of Venezuela, Darío Vivas said that the people have taken to the streets again to ratify their solidarity with the peoples of Latin America.

“We have decided to return to the streets to show our solidarity with the peoples of Latin America that are resisting the repression of US imperialism,” said Vivas. Also the Minister of the Popular Power for Education, Aristóbulo Istúriz, said that “it is very important that Venezuela goes out to the streets, we had a strong victory in the Human Rights Council of the United Nations Organization and we defend it in the street, all of Latin America will defend the triumph of Evo Morales and reject the interference of the International Monetary Fund (IMF).”

The march reached Puente Llaguno, in the center of the Venezuelan capital. In Maracaibo there was also a march from the Republic Square, to cross 77th Street, July 5th to 71st Street, 3rd Avenue.

Cabello: In Latin America the Bolivarian and revolutionary left has resurfaced
On the stage of the march, the first vice president of the United Socialist Party of Venezuela (Psuv), Diosdado Cabello, said Thursday that in Latin America “the revolutionary and Bolivarian left has resurfaced”, referring to the recent demonstrations in countries such as Chile and Ecuador.

Cabello said that Latin American peoples are waking up and claiming their right to freedom and independence, while stressing that “sooner rather than later, the Bolivarian hurricane” will also reach the European Union (EU). “The people are waking up, they go out to the streets, they begin to claim their rights, to be free, to health, to education, to decent housing (…) In Venezuela we did it 30 years ago in the year 1989, it is a Bolivarian breeze, it’s the feeling of Bolivar, ”he said.

“The empire has been wrong, the Bolivarian and revolutionary left has resurfaced, the rebellion of the peoples (…) There is no way that nothing happens in Ecuador, Chile, Brazil, Colombia because they are being exploited, suffocated. The social processes are unstoppable,” he said.

He also pointed out that there is no other culprit in the social repression that these peoples experience than the International Monetary Fund (IMF), who follows orders from the US empire.

“Everything is summed up to the US empire that gives orders to the IMF to drown the people and also has lackeys presidents like Piñera, Macri, Duque who surrender to the orders of imperialism,” he said.

Cabello urged the unity of the peoples of the world as the only mechanism “to face the US empire.”