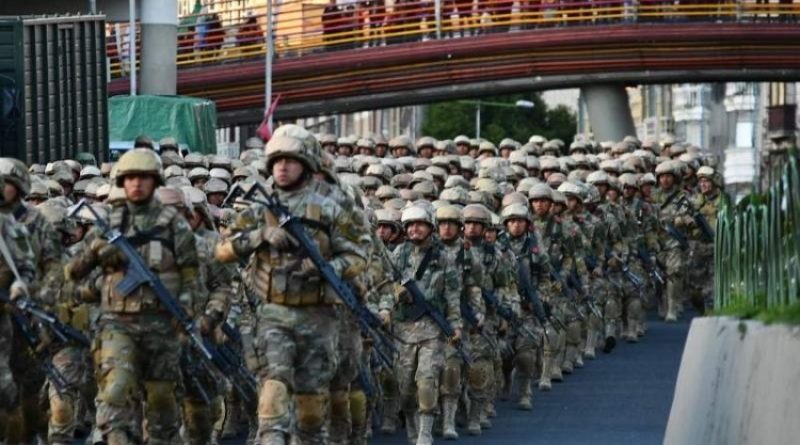 Bolivians will return to the polls on May 3, almost five months after former president Evo Morales was ousted in a coup. Having been declared the winner of the October 20 election, the leader of the Movement Towards Socialism (MAS) was forced to resign three weeks later after opposition protests denouncing fraud culminated in the police and military calling on Morales to step down.

With right-wing senator Jeanine Áñez sworn in as “interim president”, the post-coup government has set about ensuring that after 14 years of MAS government, the leftist party will not return to power. Backed by the military, media and judiciary, the government has been persecuting MAS activists and repressing protests.

Almost 30 protesters have been killed since the coup and, in a show of strength, the government ordered the military onto the streets of the capital, La Paz, on January 16 ahead of anti-coup protests planned for January 22 — the day Morales’ term constitutionally ends.

Despite this, the MAS continues to lead in the polls, writes Fernando Molina from La Paz.

For two months, the media have bombarded Bolivians with daily reports on an investigation into the charging or arrest of one or another ex-collaborator of exiled ex-president Evo Morales. Morales is the subject of an international arrest warrant issued by Jeanine Áñez’s transitional government.

The latest story was of the arrest of ex-minister of government Carlos Romero on January 15, whom prosecutors have accused of corruption. Romero was taken to jail after being informally arrested — first in his home and then at a medical clinic — by civilian groups that refer to themselves as the “resistance”, and have the backing of the police to impose their law on the street.

These groups also maintain a daily presence around the Mexican embassy in La Paz, where various ex-ministers and Movement Towards Socialism (MAS) leaders have sought refuge but have not been — and will not be — granted safe passage to leave the country.

Members of these groups take turns to inspect vehicles entering and leaving the exclusive neighbourhood of La Rinconada, where the ambassador’s residence is located.

For now, they operate in two cities, La Paz and Cochabamba, the scenes of most of the fierce clashes between Morales’ supporters and opponents prior to his overthrow. The “resistance” is comprised of organised middle-class neighbours and students who, during the crisis, armed themselves with sticks, helmets and improvised shields to confront the contingents of workers and peasants that sought to neutralise the opposition protests.

The person most hated by the “resistance” is one of the key MAS leaders seeking asylum in the Mexican ambassador’s residence, Juan Ramón Quintana: An ex-minister of the presidency and key figure in the previous government, he has been charged with sedition and terrorism.

The ex-minister of justice, Héctor Arce; of culture, Vilma Alanoca; of government, Hugo Moldiz; and defence, Javier Zavaleta; are all trapped in the diplomatic house and facing various criminal charges.

They are accompanied by Nicolás Laguna, ex-director of the Government Agency for Electronics and Information and Communications Technology, who is accused of electoral fraud, as well as other former high-ranking officials who, for now, are not facing criminal proceedings but have been refused safe passage.

Many of the charges have to do with something the person said: Morales is accused of terrorism and sedition for having rung a peasant leader and asked him to blockade the cities and make sure “food cannot get in”.

The ex-president was also recently charged for having said in Argentina that if one day he returns to power, he will have to organise armed militias, like late socialist president Hugo Chavez did in Venezuela, to ensure his mandate.

Quintana is accused of terrorism and sedition for having declared to Russian news outlet Sputnik that a coup against Morales had to be intensely opposed by converting Bolivia into “a modern-day Vietnam”. The government has jailed an au pair and a courier who worked for him.

These and other controversial arrests — such as that of a doctor who attended to a left activist who had been wounded by a bullet in a clinic, or the young public employees who made memes against the government using workplace computers — have provoked some individual complaints in the media, which, in institutional terms, have applauded Áñez’s government and celebrated the existence of the “resistance”.

Along with Romero, dozens of people have been charged with corruption. There are also ongoing investigations into the patrimony of 600 former MAS ministers, vice ministers, directors, governors and mayors.

When Andrónico Rodríguez, the leader of the Chapare coca growers union, announced that a new stage of “peaceful resistance against fascism” would begin on January 22, and suggested protests be held, minister of government Arturo Murillo tweeted: “Andrónico, be careful, this radicalism is putting at risk your leadership and future”.

Rodríguez had to come out and clarify that he was not planning to commit any crime and denounced the government for trying to suppress union leaders through judicial processes and arrests.

In an attempt to halt the wave of repression, the MAS passed a law regarding human rights in the Legislative Assembly. It demanded the Áñez government compensate the families of the 29 people killed due to repression and opened up the possibility for union and political leaders who feel they are being unjustly persecuted, to present their cases to the courts.

The government responded by saying it considered the law “unnecessary” and anti-constitutional.

All of this is occurring with the support of the middle and upper sections of society, who have converted Murillo into a popular figure. The minister, who before coming to power was questioned for the abruptness of his scraps with Morales, today is applauded when he enters any cafe in La Paz.

The “pacification of the country”, as the measures against the MAS are officially referred to, have converted Áñez into the highest polling anti-Morales politician (15%, according to a Ciesmori poll done for Unitel).

Ex-president Carlos Mesa, who came second behind Morales in the October elections, is only polling at 13%.

However, Áñez has said she will not be a candidate in the May 3 elections. Instead, she is pushing for the different candidates to unite against MAS which, even before having defined its candidate, remains the largest party in the country, with 20% voter support.

[Translator’s note: The MAS announced on January 19 that it would run former economy minister Luis Arce and former foreign minister David Choquehuanca as its presidential and vice presidential candidates.]

However, the MAS is also the party with the highest level of disapproval. Ensuring the “tyrants” and “narcotraffickers” do not raise their heads in the new elections has become the main concern for that segment of the population that was committed to the overthrow of Morales and today dominates public opinion.

The pressure to form an anti-MAS united front has not stopped various people expressing their desire to run. Mesa is putting himself forward as the centre option, a space he will probably have to fight over with business owner Samuel Doria Medina, Morales’ main opponent in the 2014 elections.

Another ex-president, Jorge Quiroga, is seeking to represent the traditional right. Luis Fernando Camacho, a key figure of the “resistance” in Santa Cruz and principal leader of the civic movement that claimed responsibility for deposing Morales, is running together with his Potosi counterpart, Marco Pumari. This list represents an expression of the new right, characterised by its religiosity, its civilian “shock troops” and its strong presence on social media.

Many thought Camacho and Pumari would quickly become the main option for anti-Morales voters, but for now they have not managed to climb in the polls.

This is possibly because the first attempt to bring the two together on a common slate ended in spectacular failure. In early December, Camacho said he would not run with Pumari and later released a taped conversation in which he criticised him for having asked for US$250,000 and control over customs in Potosi in exchange for his support.

Pumari did not deny the conversation, but said he wanted the money to finance his election campaign and that the nomination of a civic representative to the board of directors of customs was a “demand of the people of Potosi”.

The Legislative Assembly remains in MAS hands, but its parliamentary bloc has been neutralised by: the popularity of the government in the cities; the monolithic alignment of the military, police, prosecutors and judges behind the government; and its own division between a “conciliatory” group and those “loyal” to Morales.

The Constitutional Tribunal has extended the parliament’s mandate, which was meant to end on January 22, until the handover to a new president, which is expected to occur mid-year.

Featured image: The military have been mobilised on the streets of La Paz ahead of anti-coup protests on January 22. Photo: Eduardo Lohnhoff Bruno/Facebook