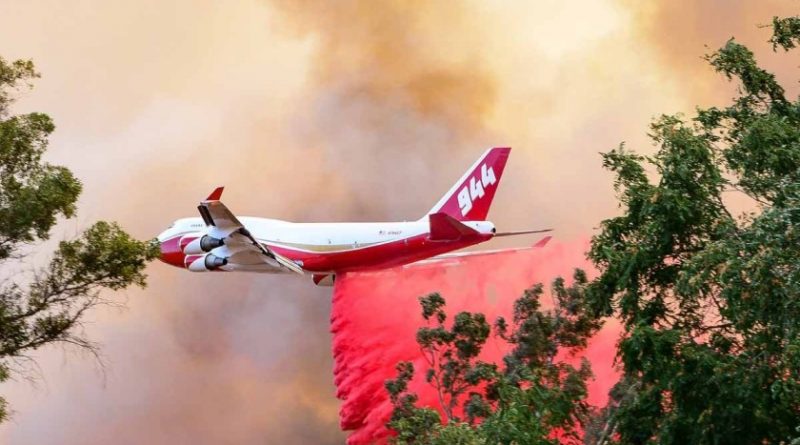 Bolivia’s President Evo Morales announced on Wednesday that Bolivia had contracted a Boeing 747 ‘Supertanker’ to help extinguish huge forest fires in the Amazon have that spilled over from Brazil. By Wednesday evening, the government confirmed that the tanker is arriving in the country and will be operational on Friday.

The ‘Supertanker’ can carry more water than any other aircraft in the world, capable of flying with 115, 000 liters, equivalent to a 100 regular air tankers. Prior to the tanker’s arrival, the military will fly planes over the region to assess where exactly the tanker should focus.

There will also be three new helicopters, working with the three already in operation, working to extinguish the fires. Other measures include the creation of an ‘emergency cabinet’ and the dispatch of an extra 500 troops on Thursday morning, as reinforcement for the firefighters on the ground. There will also be around 10 light aircraft, putting out fires by fumigation.

RELATED CONTENT: Brazilian Congress Committee Approves US Use of Alcantara Base

On the first day of the fires spreading to Bolivia, President Evo Morales visited the areas and brought two helicopters to evacuate affected communities, along with large shipments of emergency food aid.

The new measures by the government come amid calls by right-wing opposition candidate Carlos Mesa to allow foreign aid to help put out the fires.

Nevertheless, Bolivia’s government has long rejected calls for outside intervention for natural disasters, arguing that Bolivia’s economy has developed enough to provide sufficient resources to cope, and must deal with issues internally to protect sovereignty. Speaking earlier in the year when flash floods hit the Department of Beni, Vicepresident Alvaro Garcia Linera said “Bolivia has the resources…the era of begging [to outsiders] has passed, leave that to Carlos Mesa”.

Some have pointed to how international ‘emergency aid’ from the US often leads to militarization and occupation, such as that which took place in Haiti, following devastating earthquakes. There, relief operations were led by the US military’s Southern Command, and scholars have illustrated the subsequent role of USAID in working with US corporations in creating patterns of dependency in the country. One academic has described it saying. “USAID used the occurrence of the January 2010 earthquake tragedy to accelerate in Haiti the implementation of a neoliberal agenda congenial to the business promotion of multinational investors, particularly US multinational corporations.”

Hoping to avoid such a scenario, President Morales reiterated on Wednesday that “We are no longer forced to submit to ‘international aid’…we can respond ourselves immediately’

The recent fires in the Amazon started in Brazil, though exact causes are unclear, organizations in the Amazon blame loggers and landed elites allied to President Bolsonaro, for deliberately starts fires to clear land for cattle ranching. The European Union’s satellite program, Copernicus, showed how the fire then spilled over into Bolivia and Peru. The fire has devastated almost half a million hectares of Bolivia’s Amazon rainforest, largely affecting the historic Chiquitania area.

Featured image: The 747 SuperTanker drops on the Palmer Fire south of Calimesa and Yucaipa in southern California, September 2, 2017. Photo by Cy Phenice, used with permission.